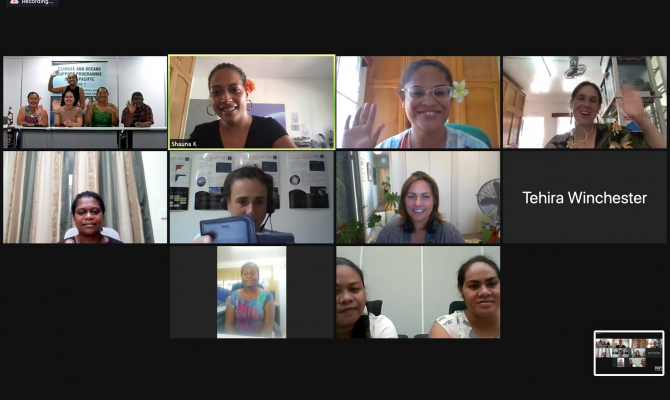 Organisational Culture was the focus of the final session of Gender Equality and Social Inclusion (GESI) training for Pacific National Meteorological and Hydrological Services.  Having started in March this year, the series of training sessions aimed at strengthening GESI across the Met Services in the Pacific region for improved service delivery.

The final training in the series was the platform for Pacific National Meteorological and Hydrological (NMHS) staff to assess their organisation’s culture including their commitment and the application of GESI principles in internal processes.

It also aimed to help NMHS staff identify organisational barriers and opportunities to GESI in the context of resources, capacities, programme design, and implementation.  It is hoped that results from this training will see NMHS staff identify and commit to implementing practical GESI-related tools and concepts within their organisation’s structure and internal processes.

The training took a closer look at the political will and leadership of an organisation to address social inclusion.

Examples were provided by participants from their own respective countries on how the culture within their organisations helped or hindered the application of GESI principles in the work they carry out.

In Papua New Guinea it was shared that work is now underway to include gender equality and social inclusion in social delivery.

In New Caledonia, it was highlighted that the Met Office has facilities that are accessible and gender-appropriate, such as bathrooms for male and female with locks and adequate lighting.  This helps ensure that women always feel safe in the workplace.  Parents are also granted the flexibility of working hours for picking up their children from school, or for new mothers to go home to breastfeed their newborn or infant children.

One challenge for female weather forecasters on shift that was highlighted during the training is when there is a looming extreme event like a tropical cyclone.  At these times forecasters are expected to be available and on standby for duties at the office. Challenges are posed for female staff to commute back home to feed their babies and return to the office for work.

Other female participants shared similar experiences, although some asked to note that unofficially many of the national meteorological services in the Pacific provide extra support to female staff through scheduling female forecaster for day shifts.  This allows children at the office if they’re unwell, or pick up from school, all in the hope female staff continue to care for their children and enable them to continue with their work.

At the end of the training, the participants were asked to put their plans into action. They were to write a letter either to themselves or their Director on what they’ve committed to doing after the training over a three month period - actions that have been undertaken to further strengthen GESI within their organisations.

In three months’ time, a follow-up will be conducted using these letters, to see how the participants and their organisations have progressed over time with these commitments.

Mr Salesa Nihmei, Meteorology and Climatology Adviser of the Secretariat of the Pacific Regional Environment Programme (SPREP), officially closed the training by saying a few words of thanks to the participants and partners that helped make the training series a success.

There were three GESI training sessions held in total.  These were held on 9 March, 16 March and 13 April, this year.

The initiative is part of the Australia-Pacific Climate Partnership, in collaboration with the Climate and Oceans Support Programme in the Pacific (COSPPac 2), SPREP and Talanoa Consulting. It was funded by the Government of Australia through the Department of Foreign Affairs and Trade.