SWAP Project is getting ready to roll out 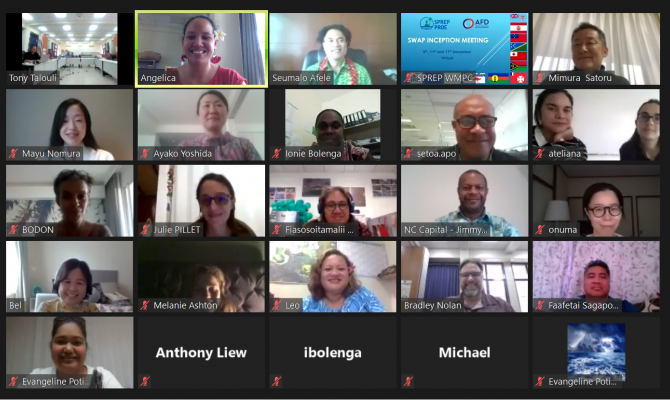 The virtual inception meeting for the upcoming Sustainable Waste Actions in the Pacific (SWAP) project kicked off on December 9, 2020. The first of a three-series session, the meeting was well-attended with country representatives identified as intervention areas for this project. Regional partners who are also initiating waste actions in the Pacific region also participated in the virtual inception meeting. A total of seven countries and four ongoing and pipelined project teams expressed interest in knowing more about the project.

Funded by Agence Française de Développement (AFD) and implemented by the Secretariat of the Pacific Regional Environment Programme (SPREP), SWAP is one of several projects underway across the Pacific islands region to help achieve the regional goals set out in the Cleaner Pacific 2025: Pacific Regional Waste and Pollution Management Strategy.

“Cleaner Pacific” is the long-term strategy for integrated sustainable waste management and pollution prevention and control in the Pacific islands region until 2025.

Mr Anthony Talouli, Acting Director of Waste Management and Pollution Control (WMPC) Programme at SPREP said during his opening remarks, “We’re very grateful to our partner AFD, for their support in helping to make this happen.  Our waste problem across our region continues to grow, we need to have concerted efforts for a Cleaner Pacific, and this SWAP project is just one of the many initiatives to make it happen.”

Speaking on behalf of AFD during the opening of the inception meeting was Ms Nolwenn Bodo, Public Sector / Pacific Regional Cooperation Manager who provided an overview of the support AFD is providing to the Pacific Region in a number of sectors.

Ms Bodo stated that it was in 2017 when SPREP approached AFD to consider continuing support to deliver its mandate on waste and pollution management, being the lead agency to assist  the Pacific in addressing growing issues on waste and pollution. From this, a concept proposal was submitted building upon previous work with SPREP which had received a satisfactory rating. The proposal was initially considered, and a feasibility study was conducted to confirm the priority themes proposed by SPREP. Through the feasibility study, AFD and SPREP were able to identify and agree upon specific activities to carry out in specific countries through SWAP.

This led to the signing of the funding agreement for SWAP in February, 2020 at EURO 3 million, with the opportunity to upgrade it to EURO 5 million.

“Through this initiative, it is hoped that the Pacific Ocean as a world heritage region will be preserved with its outstanding land and marine biodiversity that affords priceless services to communities,” said Ms Bodo.

“This was done in recognition of the fact that the Pacific region is located in one of the world’s most climate change vulnerable regions, with very little resources to take up this challenge, even though their traditional lifestyles depend on it.”

“Our commitment to SPREP on the waste theme and the support to the waste sector in the Pacific dates back to a decade ago when we first partnered with SPREP, and AFD believes that there is still so much to be done to improve waste and pollution management in the region. It is our hope that this partnership with you all will come into fruition and will foster greater ties between the Pacific Island countries and the overseas territories,” said Ms Bodo.

The first day of the virtual inception meeting was an opportunity for participating countries and partners to come together and hear relevant information about the project from the team based at SPREP’s WMPC Programme.

The first day of the virtual inception meeting was an opportunity for participating countries, and partners to come together and hear relevant information about the project from the team based at SPREP’s WMPC Programme. The meeting will continue on the 11 and 17 of December where participants will hear more on SWAP’s specific project activities and potentially come up with a draft work plan for 2021 and forecast over the remaining years of the project.

The Sustainable Waste Actions in the Pacific Project is funded by Agence Française de Développement (AFD) and implemented by the Secretariat of the Pacific Regional Environment Programme (SPREP).