Team Pacific at the UNFCCC COP25 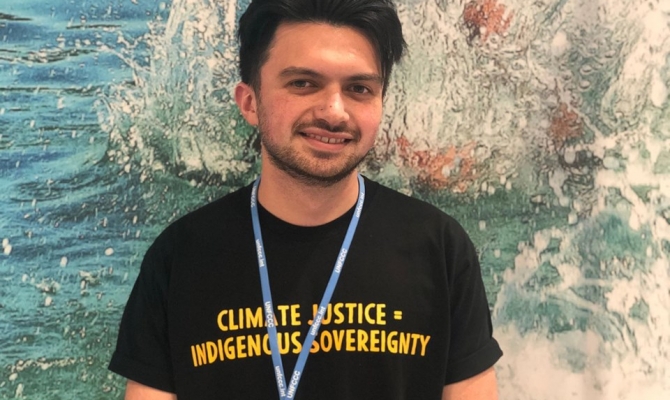 For this one in particular – we feature a member of our Pacific family, from New Zealand.

We hope you enjoy getting to know Kaeden Watts from Aotearoa, New Zealand.

Q: How did you come to be involved in the space of climate change?
A: I’m Maori from Aotearoa New Zealand here with a Pacific youth delegation from a bunch of islands, but we call Aotearoa home physically. I became involved in this space through identifying a lack of indigenous youth representation in these talks, particularly from the Pacific. I attended COP24 last year in Katowice, Poland and saw there was such a big gap for indigenous youth and decided to bring back a delegation from the Pacific this year. Our current delegation is from three islands in the Pacific – Aotearoa, Papua New Guinea and Tonga and we’re trying to get the Pacific youth voice into these talks and bring attention to the climate crisis that’s happening back home.

Q: What is an issue/issues that have come out of COP25 that is of interest to you?
A: For me personally it’s been the discussions around Agriculture that I’ve been following. I’ve been working with the Indigenous Peoples Caucus trying to follow the negotiations and to see where indigenous people’s knowledge can fit into and help guide that conversation. It’s clear that indigenous people’s knowledge is the solution and has always been the solution, in making sure that we can keep our agriculture emissions low. They use the term agro-ecology quite a bit which its foundations are built on indigenous knowledge so I’ve been following that as well as some stuff on human rights and indigenous rights and Article 6 and the lack of progression that’s been happening in that space.

Q: What advice would you have for other Pacific island youth who would also like to have their voices heard in this space?
A: Be strong in your identity and be strong in your cause, because if those are the foundation for your messages and your work, you’ll never lose sight of what you’re doing. It’s very easy to be shut down and be made to feel small and quiet in this space but as long as you are confident in your messaging and confident in your cause, they’ll never be able to take from you. You’re always going to have that and you’ll always be able to keep fighting and they’ll never be able to take away your energy.