Turning the tide on the war against waste 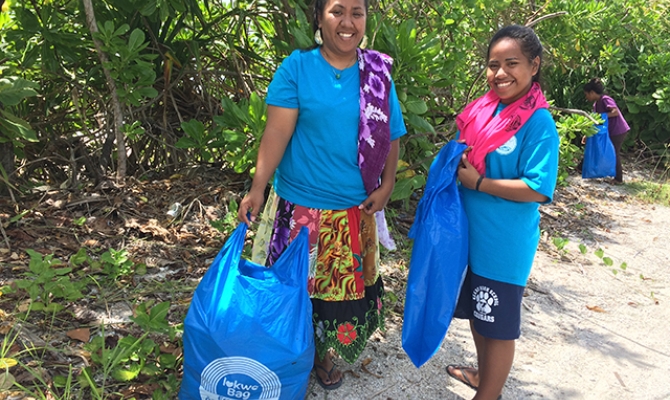 A wave of innovative new waste management initiatives and the introduction of landmark legislation, looks set to place Republic of the Marshall Islands at the forefront of sustainable waste management practices in the Pacific islands region.

Work towards the transformation of the waste management on the small island nation has been made possible through close collaboration between key players working in the waste sector including donors, regional agencies, national and local government, local agencies, private sector, NGOs and – crucially – community members. 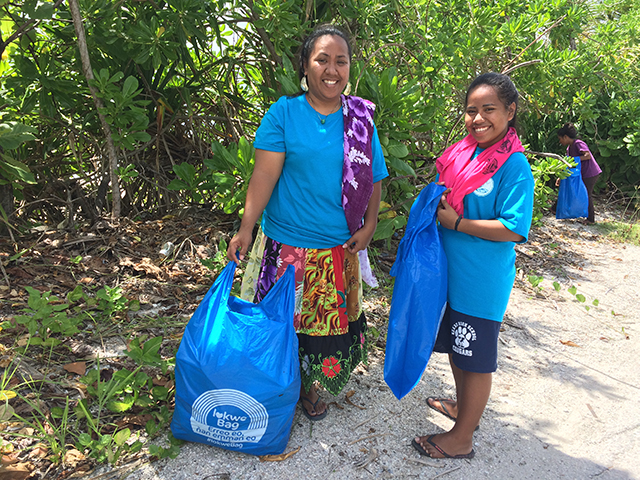 With key partners joining forces to tackle the issue of waste, rubbish on the streets of Majuro may soon be a thing of the past. Photo: A.Carvan/SPREP

Majuro atoll in Republic of the Marshall Islands is the site of the PacWaste project's integrated atoll waste management pilot programme. PacWaste is a 7.85 million euro project funded by the European Union and implemented by the Secretariat of the Pacific Regional Environment Programme (SPREP) to improve regional hazardous waste management across the Pacific.

One of the initiatives being implemented by PacWaste in Majuro is the introduction of a specially designed garbage bag called the Iokwe Bag. Money from the sale of the Iokwe Bag, distributed through K&K, will be used to pay for an expanded household waste collection service across the entire atoll – ensuring that the system is both universal and cost-effective. 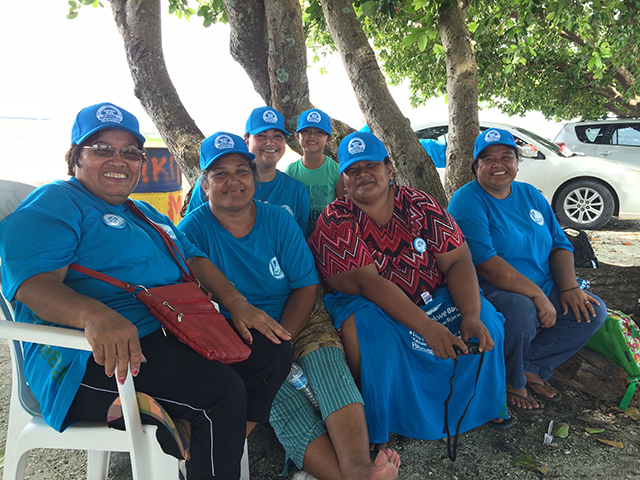 Another PacWaste initiative has been the introduction of a Used Lead Acid Battery (ULAB) buy-back scheme through which community members can take old batteries to a central site and be paid for them by the weight.

A key partner for both these activities is the Majuro Atoll Waste Company (MAWC) which currently provides waste collection services for roughly 75% of homes on the island. Mr Jorelik Tibon, General Manager of MAWC, describes the feeling of momentum that is taking place on the ground:

"Here in Majuro, it's a very exciting time to be working in the waste sector. There is a great sense of optimism now that our hard work is finally coming to fruition. For example, in just six weeks MAWC has overseen the removal and safe packaging of 515 batteries. It's great to be able to remove these hazardous items from the community and, ultimately, from the island." 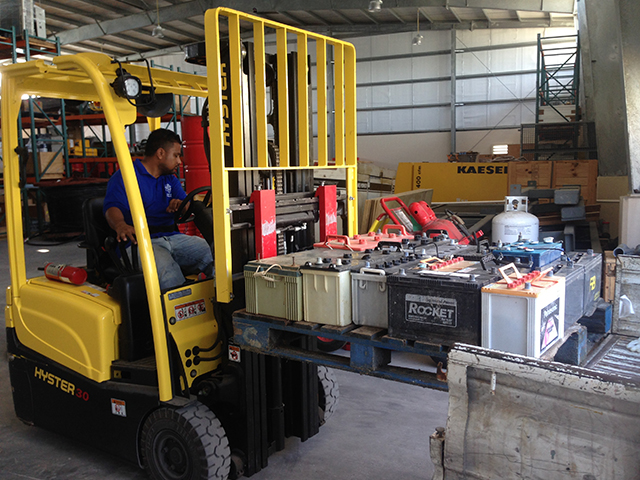 Hazardous Used Lead Acid Batteries are packed on site at MAWC for shipping off the island. This shipment of used batteries is the first to be exported from Majuro under the Basel Convention. Photo: T.Hartley/SPREP

Importantly, the work being done to shift public attitudes towards waste is taking place on numerous fronts. Partners involved in this work have been working together to complement and cross-promote behaviour change and awareness-raising activities that are already happening at the national level. One such example is evident through the Environment Protection Authority's 'Clean Schools' programme.

Mr Carter Daniel, who works at the Marshall Island's Environment Protection Authority (EPA), explains that an important part of his work is to conduct outreach activities with school-aged children in Majuro to educate them on sustainable waste management:

'Through the Clean Schools Programme we conduct educational talks, participate in clean-ups and encourage schools to submit an Action Plan for improving waste management on campus. We are also working closely with Majuro Atoll Local Government [MalGov] to distribute wire trash bins to the schools in the Programme. We are also finding that the visits provide us with the opportunity to promote other waste initiatives taking place in Majuro such as the Iokwe Bag." 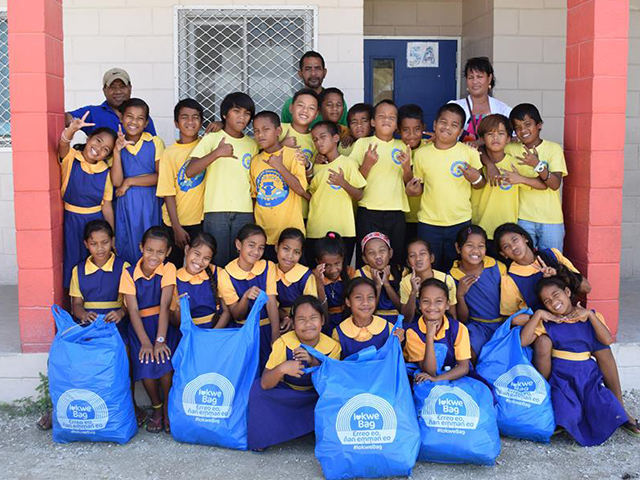 A recent additional development that is contributing to the momentum on waste sector transformation in RMI is the recent introduction of legislation, known as Bill 28, that will prohibit the import, manufacture, sale and distribution of Styrofoam cups and plates, disposable plastic cups and plates, and plastic shopping bags.

Ms Moriana Phillip, Director of the EPA, explains that the plastic and Styrofoam ban elements of Bill 28 will be phased in from February 2017 and will be complemented by a beverage container deposit scheme to commence a year later:

"Majuro currently has the highest per capita waste generation in the Pacific region and disposable plastic packaging makes up a significant proportion of this waste. Our newly legislated Bill 28, in tandem with other waste management activities being implemented by EPA, MAWC, MalGov, PacWaste and others, is tackling the issue of waste at every available level. We feel confident that this is going to make a huge difference to the people and environment of the Marshall Islands." 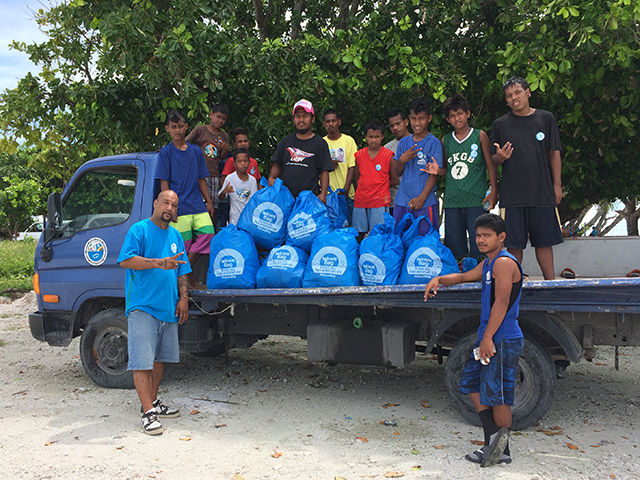 Staff from MalGov participated in the Iokwe Bag Clean-up Day and provided trucks to assist with rubbish collection. Photo: A.Carvan/SPREP

Mr Christoph Wagner, Head of Cooperation at the European Union Delegation for the Pacific, says that is very encouraging to see that PacWaste's "pilot integrated atoll waste management project" is taking place in such a favourable environment:

"For this pilot programme to be successful it is essential for implementing agencies to be working together, alongside communities, to trigger these important changes. By bringing together the work of PacWaste and the government partners, private sector and NGOs the project will make Marshall Islands cleaner and safer. Marshall Islands can become a model for waste management in other island nations across the Pacific and the world."

Support for the improved management of waste in Republic of the Marshall Islands is provided by: OEPPC, MalGov, Ministry of Public Works, WUTMI, PSS, MAWC, EPA, MIVA, K&K, JoJikum and Blu Cru.