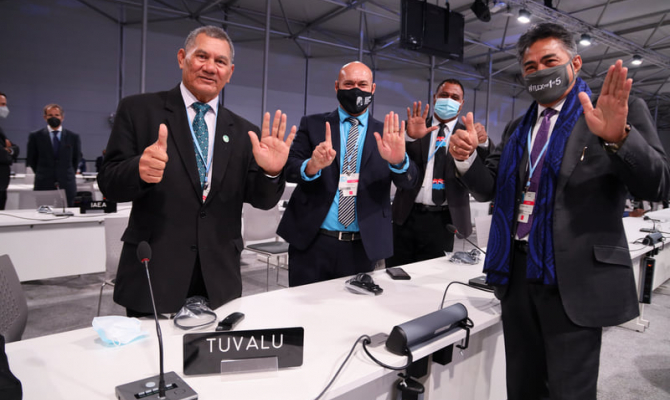 3 November 2021, COP26, Glasgow - Tuvalu is sinking with 40 per cent of the atoll nation’s capital, Funafuti, already below sea level at high tide. This reality coupled with rapidly rising sea level has placed Tuvalu’s population under enormous threat, world leaders have been told.

Tuvalu’s plight was highlighted by the country’s Prime Minister, Hon. Kausea Natano, during the High-Level Segment of the Twenty-Sixth Conference of the Parties to the UN’s Framework Convention on Climate Change (COP26) in Glasgow, Scotland. He wore a scarf gifted to him by the Aboriginal women of Australia displaying the colours of global warming, sending a strong message to the world that the people of Tuvalu need help.

“For atoll nations (like Tuvalu), the gravities of sea level rise are now unalterable and emission restrictions will no longer help us. For Tuvalu we urgently require the means to build raised reclamation land to save ourselves,” the Prime Minister said. “We must take bold alternative actions today to secure tomorrow. Even if all greenhouse gas emissions cease tomorrow, Tuvalu and other low-lying atoll nations are sinking.”

Prime Minister Natano is among a few Pacific leaders who have travelled from their capital to attend the meeting in person. Restrictions caused by COVID19 have meant a number of other Pacific leaders are unable to attend. He acknowledged this reality but said this and the impact of climate change demonstrates the interconnected nature of the global community. That global community, the Prime Minister pointed out, has a shared responsibility to address climate change.

“Mr. President we must conclude negotiations on the Paris Rulebook and safeguard the integrity of the Paris Agreement. We must urgently call on major emitters to take stronger climate action.”

Although steadfast in calling for global urgent action to limit global warming at 1.5 degrees, there was a lot of sadness in his tone when he told world leaders about the reality in his island state. He highlighted the need for large-scale climate finance and new funding windows for loss and damage.

“We must also realise that these steps may not help countries like Tuvalu that are irreversibly affected by climate change. For Tuvalu, we must fast track large-scale climate finance that are easy to access for bold long-term and permanent adaptation solutions,” the Prime Minister said.

“Whatever our progress in combatting climate change there would likely be countries who cannot adapt and we would see significant loss and damage even at safer temperature levels. Given this, we must immediately develop new financing mechanisms and funding windows for loss and damage. We must preserve our statehood and sovereignty and develop legal mechanisms to recognise our maritime boundaries as permanent despite the impact of sea level rise.”

Prime Minister Natano also revealed that at COP26, Tuvalu has signed an agreement with the Prime Minister of Antigua and Barbuda to establish a Commission of Small Island States on Climate Change and International Law.

“The Commission is authorized to request advisory opinions from the International Tribunal of the Law of the Sea on the legal responsibilities of States for carbon emissions, marine pollution and rising sea level. We must support initiatives of this nature to develop and implement fair and just global and environmental norms and practices.”

Looking at the wider Pacific region, Tuvalu reaffirmed the urgency of the climate change crisis facing Pacific SIDS, despite what he referred to as the region’s “negligible contribution to global emissions.”

“We urge world leaders to similarly affirm the critical urgency of the climate crisis; this is the single greatest threat to Pacific livelihoods.

“We must urgently call on major emitters to take stronger climate action.  We must take bold alternative actions today to secure tomorrow,” the Prime Minister said. “We acknowledge plans by countries but for Tuvalu our existence is already being threatened and it is already too late for Tuvalu and SIDS. We cannot wait for ten years, or for another year, enough has been said. We must take action now to save and secure our future.”

Prime Minister of Tuvalu Hon Kausea Natano presented at the High-Level Segment of COP26 on 2 November 2021.  The Twenty-Sixth Conference of the Parties to the UN’s Framework Convention on Climate Change is held in Glasgow from 31 October – 12 November 2021.

You can view the webcast of the statement from Tuvalu at: https://unfccc-cop26.streamworld.de/webcast/first-part-of-the-high-level-segment-for-heads-o-3.