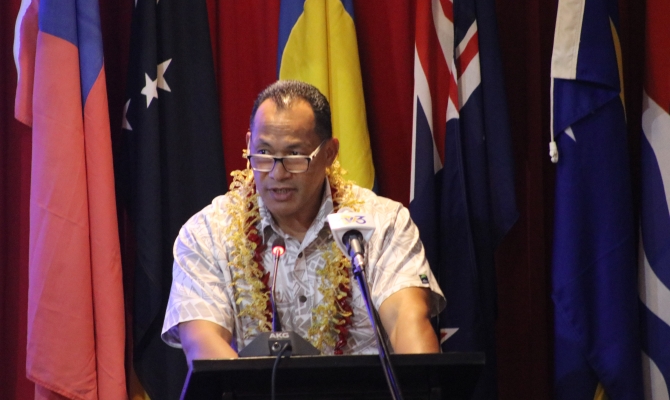 2 September 2019, Apia, Samoa – A resilient Blue Pacific. This is the guiding theme of the Twenty-Ninth SPREP Meeting of Officials which officially opened this evening at the Tanoa Tusitala Hotel.

The Meeting brings together the 21 Pacific island Members and five metropolitan Members of the Secretariat of the Pacific Regional Environment Programme (SPREP) to discuss key issues for the region, the governance of the organisation, and to approve the 2020-2021 workplan.

The theme of this year’s SPREP Meeting of Officials is aligned with the SPREP Strategic Plan 2017-2026 vision of “A resilient Pacific environment sustaining our livelihoods and natural heritage in harmony with our cultures.”

The Honourable Deputy Prime Minister of Samoa, who is also the Minister for Natural Resources and Environment, Hon. Fiame Naomi Mata’afa, delivered the keynote address to officially open the meeting.

The Honourable Deputy Prime Minister welcomed the delegates and said their presence at this week’s meeting is a testament to the continuous priority we place on the protection and management of the natural resources for our Blue Pacific continent.

“It is also a signal of our commitment in ensuring the priorities and work of our organisations, including SPREP, deliver and respond to the critical needs of our region and peoples.

“Our Blue Pacific region has reaffirmed that climate change remains the single greatest threat to the livelihoods, security and wellbeing of the peoples of the Pacific, and declared it a regional security threat through the Boe Declaration on Regional Security.

“We have recently adopted the Action Plan for the Boe Declaration, that should help advance the region’s response to security threats which includes human security and environmental and resource security. As SPREP Members, we must look at these regional priorities and explore how we can build a considered response to ensure a truly Resilient Blue Pacific.”

According to SPREP Director General, Mr Kosi Latu, this is the first such meeting of the SPREP membership, including the Environment Ministers’ High Level Talanoa, to jointly convene under the new governance arrangements, which sees the SPREP Meeting convening biennially, with an Executive Board Meeting held every other year.

It is also the first such meeting since the conclusion of the celebrations for the 25th anniversary of the signing of the SPREP Treaty, which established SPREP as an autonomous body with the mandate “to promote cooperation in the Pacific region and provide assistance in order to protect and improve its environment.”

“Our mandate remains more relevant now than ever and is why SPREP has a ‘duty of care’ to our Pacific environment, to our Pacific present and Pacific future – to create a platform of dialogue for our SPREP Membership on the environment, including current and emerging issues.”

“Our mandate is also at a critical juncture with our environment under increasing pressure. We have witnessed the increase of unprecedented waste and pollution pressures from human induced activities, and these pressures have been exacerbated by the challenges of climate change and extreme weather events. The impacts of these activities threaten our environmental, social, cultural and economic resilience,” said Mr. Latu.

A highlight feature in this year’s programme of events will be the official opening and handover of the Pacific Climate Change Centre (PCCC).

“2019 is a milestone year for SPREP with the completion of the PCCC, which has been made possible through the vision of our SPREP Membership as first discussed in 2011 and with the commitment and generosity of the Government of Samoa and also Japan,” Mr Latu added.

“The PCCC is our PCCC – it belongs to the Blue Pacific continent. It will be a globally respected Centre of Excellence providing practical information, support and training to address the adaptation and mitigation priorities of the Pacific, underpinned by strong partnerships.”

This year, a record number of participants have registered for the 29th SPREP Meeting, making it the biggest SPREP Meeting to date. The Director General also noted the participation of Ministers from Australia and New Zealand for the first time, as well as new partners such as the Asian Development Bank and the World Bank.

Mr Latu concluded by saying that the Agenda of the 29th SPREP Meeting is filled with challenging items that will require deeper engagement, and Members to make brave decisions for our Pacific present and Pacific future.

The week will conclude with the Pacific Environment Ministers’ Talanoa, which will bring together Ministers of Environment from around the region to discuss key issues pertaining to the Pacific environment.

The Meeting will bring together SPREP’s 21 Pacific island Members countries and 5 Metropolitan Members to discuss strategic issues pertaining to the organisation, and to approve the 2020-2021 work plan. The Environment Ministers’ High-Level Talanoa will be held on Friday 6 September.