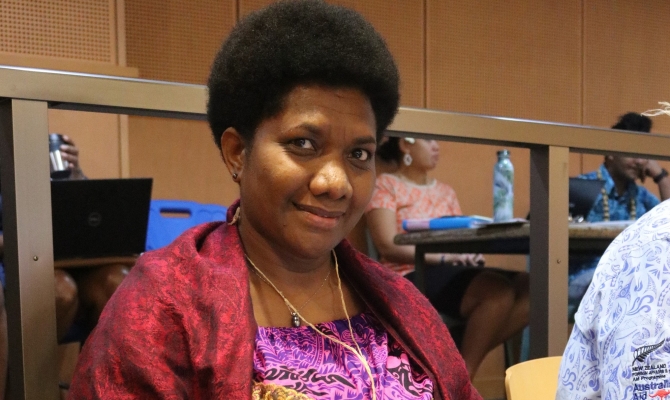 2 May 2019, Suva, Fiji - Vanuatu is ranked as one of the most vulnerable countries in the world according to a United Nations Report due to its geographic location on the tropical cyclone belt of the Pacific and the Ring of Fire, an area in the Pacific Ocean basin prone to earthquakes and volcanic eruptions and tropical cyclones.

It is continuously affected by at least one to three cyclones and up to two Magnitude 7 earthquakes with tsunami-triggering potential annually, between 100 to 300 earthquakes per month, and has six permanently active volcanoes which erupt at least once every two years.

These facts were shared by the Director of Vanuatu Meteorology and Geo-hazards Department, Ms Esline Garaebiti, during a session of the Pacific Resilience Meeting, the first meeting held under the Framework for Resilient Development in the Pacific (FRDP) in Suva, Fiji.

Ms Garaebiti spoke on Vanuatu’s national investments in multi-hazard early warning and seismic monitoring, which have helped enable the people of this vulnerable Pacific island to better prepare and act in order to avoid the terrible consequences of disasters.

“To address the issues our country faces due to its geographical location, the Vanuatu Meteorology and Geo-hazards Department (VMGD) started upgrade its volcano and seismic monitoring network. This has resulted in faster detection of earthquakes, as well as the tsunami detection and warning system,” says Ms Garaebiti.

The VMGD also merged with the Institute of Research for Development (IRD) in Noumea, New Caledonia, due to similarities in their geographical location, to enable them to pool together their resources and create a monitoring network that would benefit both countries.

These monitoring systems data sharing effort between Vanuatu and New Caledonia was  then recognised by the Intergovernmental Oceanic Commission for the Pacific Tsunami Warning and Mitigation System (PTWS) as the ideal model of seismic data sharing for tsunami early-warning in the region. It was then expanded to other Pacific island countries that are running their own national seismic networks, particularly Fiji, Papua New Guinea, Samoa, Solomon Islands and Tonga, which has resulted in the formation of what is now called the Oceania Regional Seismic Network (ORSNET).

“This network allows each seismic observatory to increase the number of seismic stations within their national network, improve human resources from less than ten seismologists in a single country, to a pool of up to 50 seismologists and geo-scientists across the region, as well as improving data quality and quantity, and the sharing of technical expertise to improve tsunami warning systems in the South West Pacific,” Ms Garaebiti added.

This notable enhancement of capacity in Vanuatu and across the Pacific region in early-warning monitoring systems is related to existing technical thematic areas established by the Pacific Meteorological Council (PMC) for national meteorological and hydrological services to strengthen weather, climate, ocean and water services to all stakeholders. This is all includes the provision of geo-hazard warnings in a number of countries.

The talk on Island Solutions and Community approaches under the Framework for Resilience Development in the Pacific (FRDP) Goal 1 was coordinated by the Pacific Community (SPC) and the United Nations Office for Disaster Risk Reduction (UNDRR) on Day 1 of the Pacific Resilience Meeting (PRM).