"1.5 to stay alive" to be supported by IPCC Report 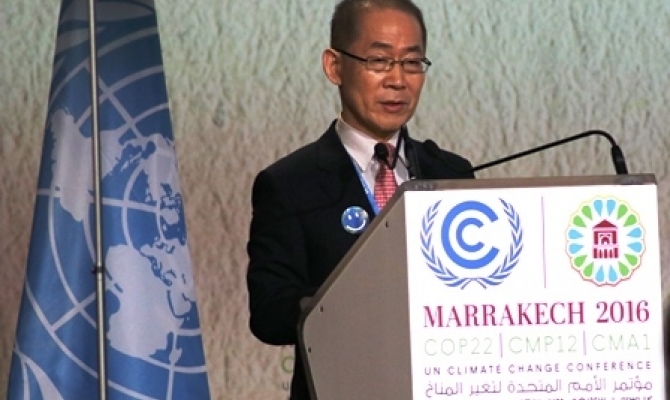 Climate Change Resilience
8 November, 2016, UNFCCC COP22, Marrakech, Morocco - Small, but powerful, the call by the Pacific islands with the Alliance of Small Island States to limit global warming to 1.5°C above pre-industrial levels, continues to be a priority at the UN Climate negotiations.

The chant of "1.5 to stay alive" has been given wider recognition within the Paris Agreement that aims to keep global temperature to well below 2 degrees Celsius above pre-industrial levels, and even further to 1.5.
Come 2018, a special report by the Intergovernmental Panel on Climate Change on the impacts of global warming of 1.5°C above pre-industrial levels and related global greenhouse gas emission pathways will be released, giving further weight to the chants of "1.5 to stay alive".

"The issue now is the impact of 1.5 reaching us in less than five years, much of our livelihoods in the Pacific islands will be impacted and I think this report will keep the Paris Agreement honest," said H.E Ambassador Colin Beck Permanent Representative to the United Nations and Solomon Islands Ambassador to the United States.

"This report will tell us, the consequences and impacts of a global temperature increase to 1.5 or more above pre-industrial levels - basically telling everyone how important the 1.5 is for our survival. Not just for the vulnerable countries, but for everyone."

It has been a year of action for the Intergovernmental Panel on Climate Change. It was one year ago that the IPCC were invited to produce the report, as part of the Paris Agreement decision. Within the year it was agreed the report would be produced by 2018, along with the outlines of the report, consisting of five chapters, two of which span the impacts of 1.5°C global warming on natural and human systems and, the strengthening and implementing the global response to the threat of climate change. 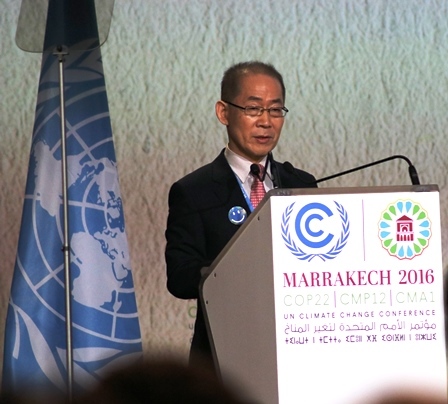 "We agreed to prepare this report, to be delivered in 2018, in time for the facilitative dialogue that year," said the IPCCC Chair, Mr Hoesung Lee.

"It is my hope that the future reports of the IPCC will provide a robust foundation for the work of policymakers, so that implementation of the Paris Agreement, can be based on sound science."

Work is now underway to bring about this special report, with the call for nominations of author's issued to governments and observer organisations on 31 October this year. Nominations must be submitted through their focal points by 11 December. 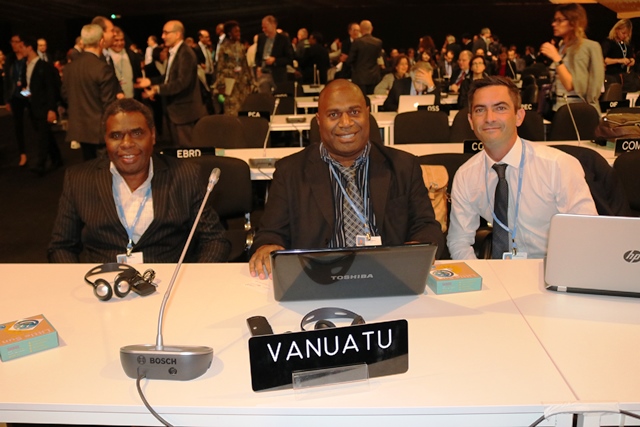 Hon. Albert Williams in middle, with members of the Vanuau delegation

'This is a very important achievement for the SIDS , the call for 1.5 has received mixed reactions with some saying that it is not feasible, this report will demonstrate why we need to make it feasible," said Hon. Albert Williams the Vanuatu Parliamentary Secretary and Special Envoy for Climate Change.

"This science will confirm that we do need 1.5 to stay alive, it will confirm what our Small islands and Pacific islands have been saying all along and that yes, we need to make it happen."

Solomon Islands and Vanuatu are part of the 13 Pacific island country delegations attending the twenty-second Conference of the Parties to the United Nations Framework Convention on Climate Change in Marrakech, Morroco from 7 to 18 November, 2016. In all there are 14 Pacific islands that are Parties to the UNFCCC. - #4PacIslands

For more on the IPCCC please visit: https://www.ipcc.ch/index.htm