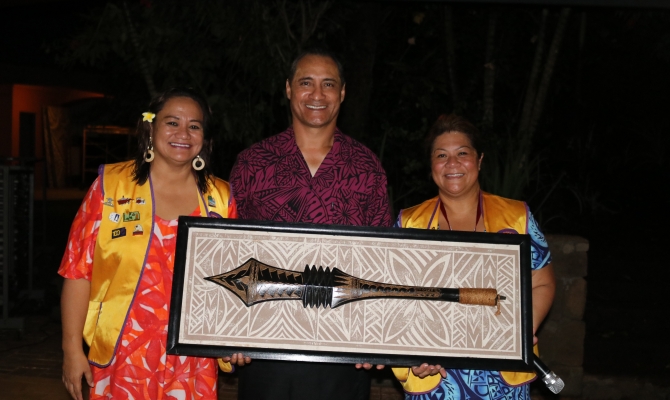 24 September 2019, American Samoa - Several individuals were honoured during a special reception and awards ceremony held at the Tradewinds Hotel in conclusion of the first day of the Pacific Risk Management `Ohana meeting in American Samoa.

The awards recognised and rewarded individuals who exhibited exceptional leadership during the 2009 tsunami which struck American Samoa.

This week marks the tenth anniversary since the tsunami, which was generated by an 8.1 magnitude earthquake which occurred 120 miles southwest of American Samoa, claimed 34 lives, destroyed multiple homes, businesses and properties, and caused millions of dollars’ worth of damage.

The first award was presented by the Lions Club of Pago Pago to Mr. Archie Soliai, Former President of the Club’s Pago Pago chapter.

“He was one of the very first people out on the field after the tsunami, providing help and assisting the people of our country, anyone who was in need at the time,” said Ms Tua-Tupuola.

In receiving his award, Mr Soliai highlighted that it is part of the Samoan culture to always help out those in need, and it was that part of him which naturally kicked in when the tsunami struck.

“I hope everyone who is here for the PRiMO conference can learn from our Samoan culture. We are a resilient people because we don’t wait around for someone or some agency to come in and help us. We first help each other and help ourselves,” Mr Soliai said.

Three awards were also presented by the American Samoa Department of Homeland Security in recognition of key people who were instrumental in the recovery efforts of American Samoa after the tsunami.

The final award was presented by the National Disaster Preparedness Training Center, in recognition of Galumalemana Ifopo Fuapopo Avegalio, whose efforts in training and educating the local community communities throughout many disasters since 1987, has helped build the resilience of the local communities in American Samoa.

The reception, organised by the Lions Club of Pago Pago, brought together the participants of the PRiMO Meeting to unwind after a productive day of deliberations, and presented the perfect opportunity for the awards and recognitions to be given out.

Meeting every year, this year is the third PRiMO meeting hosted in American Samoa for which the meeting will seek feedback and input on pre-disaster recovery and long-term disaster recovery planning.
The special PRiMO awards event hosted by the Lions Club of Pago Pago took place on 24 September at the Tradewinds hotel. - #ASPRiMO2019