Crocodile trade protection act and its regulations to be amended 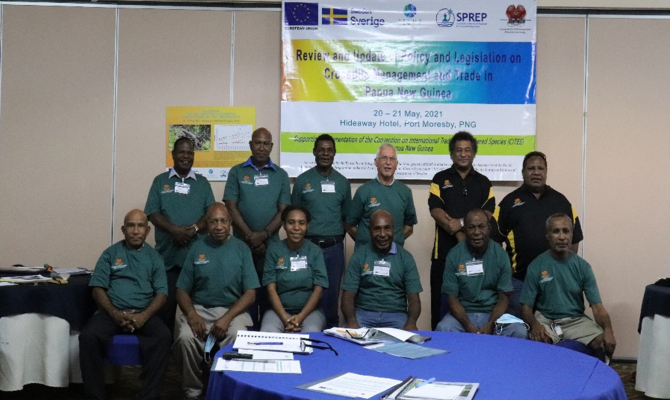 Port Moresby, Papua New Guinea – The drafting of a Bill to amend the Crocodile Trade (Protection) Act 1974 was announced by the Managing Director for Conservation and Environment Protection Authority today. This process will involve a review of the current legislation and a series of consultations to assess the needs and priorities of Papua New Guinea’s crocodile skin trade.

"The proposed amendments will achieve more efficient and cost-effective administration of the crocodile farming industry and its crocodile skin trade to satisfy Papua New Guinea’s CITES obligations,” the Director said.

Since the last update of the 1974 Act, over 35 years ago, the approach to management and commercial use of crocodiles has changed considerably in Papua New Guinea.  The Act was designed to regulate the trade of crocodile skins and protect wild crocodile populations.

The structure of the industry has also changed significantly, evolving into a more efficient and quality controlled system in which the roles and responsibilities of the various participants have become more stringently defined and the cultural and socio-economic profiles of the individuals involved in the different sectors of the industry better understood.

The proposed amendments to the legislation will reflect these industry changes as well as changes to approaches to management and conservation of crocodiles in Papua New Guinea.

In summary the proposed changes will: improve licensing arrangements and fee collections for crocodile skins and eggs, provide for regulations of skin processing and exports, update enforcement provisions (such as forms and penalties), and transfer the export permit provisions of the Act under the International Trade (Fauna and Flora) Act.

The review of the Crocodile Management Plan will envisage to eliminate wild hunting in the future, and there will also be a review of the existing exemptions on sales, export of crocodile meat and by-products from registered crocodile farms. The amendments will also enable improvements to the quality of information provided by the industry to the Conservation and Environment Protection Authority.

“This will strengthen the scientific base of future management decisions that will reinforce overall sustainability of management and conservation of the wild resources,” the Director noted.

Supported by a crocodile expert, the Conservation and Environment Protection Authority will consult with provincial government, community leaders, industry and local conservation and NGO groups on the proposed changes before the amended Crocodile Trade (Protection) Act (1974) and Crocodile Trade (Protection) Regulation (1980) and Schedules are submitted to the National Executive Council and Parliament for endorsement.

The review of the Act and consultations are being supported by the By-catch and Integrated Ecosystem Management (BIEM) Initiative implemented by the Secretariat of the Pacific Regional Environment Programme (SPREP) under the Pacific-European Union Marine Partnership (PEUMP) programme funded by the European Union and the Government of Sweden.

CITES - the Convention on International Trade in Endangered Species of Wild Fauna and Flora – commits parties to the Convention to regulating and managing the trade and commercial use of species listed under the Convention. PNG’s two species of crocodiles (Saltwater Crocodile (Crocodylus porosus) and Freshwater Crocodile (Crocodylus novaeguineae) are both listed under CITES and therefore strict regulations need to be followed to enable the legal trade of crocodile products internationally.