Curtain falls on the Moana Blue Pacific Pavilion at COP25. 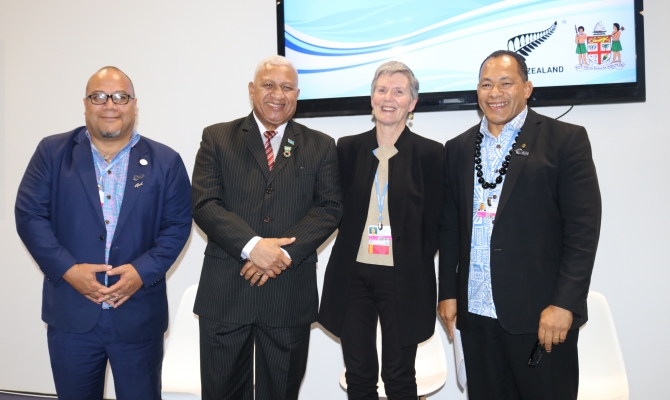 13 December 2019, Madrid, Spain – The Moana Blue Pacific Pavilion at the Twenty-Fifth Conference of the Parties to the United Nations Framework Convention on Climate Change (UNFCCC COP25) is officially closed.

The official closing ceremony was held this evening at the IFEMA Feria de Madrid Convention Centre, which has been home to the world’s largest climate change conference for the past two weeks.

The closing ceremony was attended by high-level delegates and Ministers from the Pacific, Pacific delegations to COP25, as well as visitors from around the world who had visited the Pavilion during the two weeks of the conference.

The Moana Blue Pacific Pavilion was a Pacific partnership, supported by the Government of New Zealand, with Fiji, and implemented by the Secretariat of the Pacific Regional Environment Programme. It served to provide a space for Pacific island people, and a home away from home in the cold winter of Madrid, thousands of miles away from the warmth of the Pacific.

The Honourable Prime Minister of Fiji, Frank Bainimarama, delivered his address on behalf of the Government of Fiji, reiterating the importance of including the ocean in discussions on climate change.

“For the past two weeks at the Blue COP, the Moana Blue Pacific Pavilion has been home to ideas that shape and inspire the global conversation, none more so than the Ocean Pacific Pathway,” Hon. Bainimarama said.

“All week long I have been hammering home a Pacific-led ultimatum – if the world continues to neglect an abuse the health of our oceans, we will bench our most valuable player in the climate action campaign,” he added.

The alternate head of the New Zealand delegation, Ms. Helen Plume, spoke on behalf of New Zealand Minister for Climate Change, Hon. James Shaw, and expressed New Zealand’s delight to partner once again with the Fijian Government and the Secretariat of the Pacific Regional Environment Programme to bring about the Moana Blue Pacific Pavilion.

“We’ve been pleased to see such a wonderful product, one that has been ably staffed by a very committed Pavilion team and which has played host to such a wide range of high quality and well-attended events here at COP25,” Ms Plume said.

Ms. Plume also extended New Zealand’s gratitude to Hon. Prime Minister Bainimarama and his team from the Fijian Government, as well as to SPREP Director General Kosi Latu and his team from SPREP for their hard work, dedication and commitment to ensuring the Pavilion has been such a big success.

“We know the Pacific is one of the regions that will be most affected by climate change. One of the aims of the Pavilion was to raise awareness of this challenge and to promote Pacific issues, interests and opportunities,” Ms. Plume added.

“Not only has the Pavilion achieved this aim, it has also done it in a uniquely Pacific way through colourful, vibrant and informative events. In the process, it has brought a Pacific flavour to COP25. The beautiful Pacific scenery on these walls, the sounds of drums and songs around the kava bowl all serve to remind us of what is special and unique about our Blue Pacific. It also reminds us of what’s at risk if the world does not transition to a low emissions future,” she concluded.

Mr. Kosi Latu, Director General of SPREP, thanked the Government of New Zealand for their generous assistance, as well as the Fijian Government for their support, which ensured that there would be a dedicated platform for Pacific people to share their stories of resilience in the face of the biggest threat to their survival, which they are currently facing.

“This Pavilion has managed to collect an enormous amount of information on the Pacific, which we would be more than happy to share with you all.”

Mr. Latu concluded by thanking the Moana Blue Pacific steering committee, the Pavilion team, and all those who visited the Pavilion and shared in the celebration of Pacific culture, traditions, and most of all, resilience, for making it a huge success.

The Moana Blue Pacific Pavilion hosted more than 60 side events at the UNFCCC COP25. It also provided a meeting room where Pacific ministers and delegations were able to conduct meetings.

Visitors to the Pavilion were given promotional materials, some of them from the Pacific, such as Plantation House travel bags, scarves, reusable bags, USBs, and flowers, which proved to be most popular, and could be seen all around the venue and in negotiations, further elevating our Pacific visibility at COP25.

Daily viewpoints were garnered from Pacific delegates and visitors who came through the Pavilion, which were then shared to Facebook, Twitter and the Attendify app. News from the Pavilion was also made available on the SPREP website, Facebook, Twitter and the Attendify app, as well as a range of images taken throughout the two weeks of the conference.