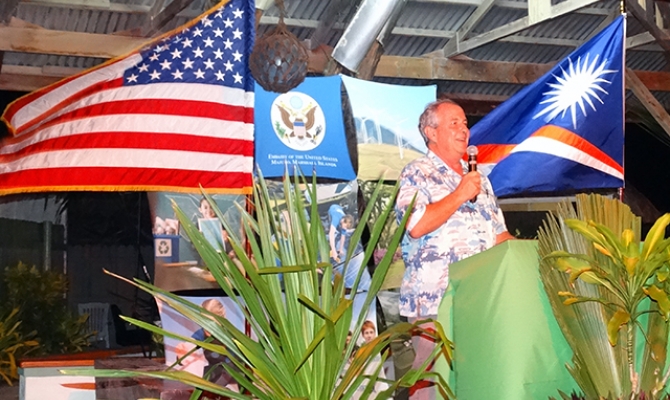 Thank you also to the Honourable President, the Government and the people of the Republic of the Marshall Islands for your warm and generous hosting of this years' SPREP Meeting. Komol Tata.

The US has been a long standing and valued member of SPREP.

In fact the US was there at the start – in a very small room - for our humble beginnings in Noumea 40 years ago, where the US was – at that time - a strong advocate of the establishment of the UNEP Regional Seas Programme for the Pacific at SPREP.

I'm pleased that our links with the US have remained strong and that our marriage vows with UNEP have been renewed with the opening of the UNEP Sub Regional Office at SPREP 3 weeks ago, during the SIDS Conference.

SPREP was set up in the early 1970s with an American - Arthur Dahl - at the helm as our first ever SPREP coordinator. Arthur in fact has often been referred to as the Godfather of SPREP. 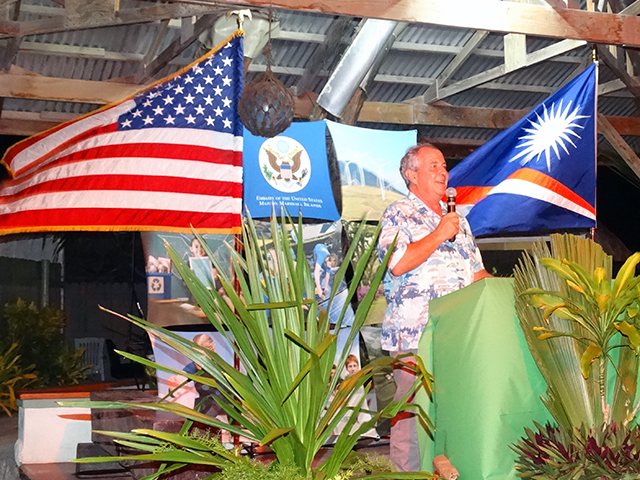 In our early days SPREP was a one man band with Arthur starting a 3 year special project on conservation of nature in the Pacific, with a general mandate to "do something on the environment and ecology". And he certainly did that.

Old SPREP Directors or Coordinators neither die nor fade away. Arthur is still very active in the environmental area from his base in Geneva, Switzerland. He sent an email recently, where he noted that:

"From a single SPREP Coordinator, the secretariat has grown to an institution serving all the region with a variety of environmental competences. Unfortunately the environmental challenges are also growing and becoming more complex and interdependent, so the need for SPREP is even greater today. Congratulations on your progress, and best wishes for the years ahead"

Thank you Arthur for your wise words and kind wishes.

In the 1980's the US was very much involved in meetings leading up to the SPREP Convention.

Scott Hajost was a young State Department lawyer representing the US at the negotiations on the SPREP Convention in the 1980's and he noted dynamics at that time included intense discussions over options for the host country for a new SPREP, as well as the increasing interest and attention to global environmental issues in the lead up to the Earth Summit - The first Rio Conference.

Scott wrote to me today and noted:

"The discussion was at times very intense but what was clear was that Pacific countries wanted a strong, independent and stand-alone agency for the environment. From these discussions SPREP was born with the ratification of the SPREP Treaty in 1993."

Scott also noted that for his first negotiating session in the 1980s they were not well briefed on the dress code and had to quickly trade in suits and jackets for less formal attire. He also noted one of the negotiations overlapped with the US Thanksgiving – so there was a break in the negotiations to allow the US and US territory delegations to celebrate – and they flew a turkey to New Caledonia from NZ.

I mention these anecdotes to underline that the US has been part of SPREP and our DNA since the beginning.

Further, that the US has long been a positive influence and support in helping Pacific countries and territories address the big environmental issues for our region.

And there is no bigger issue than climate change.

The UN Secretary General in his keynote address to the SIDS Conference in Samoa 3 weeks ago underlined the extreme vulnerability of Small Island Developing States to climate change and environmental disturbance. This message was reinforced at the Climate Summit he convened in New York last week.

Pacific leaders at their meeting here in Majuro last year highlighted climate change as the greatest threat to the peoples of the Pacific and issued the stirring Call for Action through the Statement - "Marshalling the Pacific Response to Climate Change".

The Pacific region has many of the most low-lying countries on Earth – Kiribati, Tuvalu and the Marshall Islands, as well as the territory of Tokelau.

Although our Pacific countries only contribute 0.03% of the world's greenhouse gas emissions they will be the first to go under if the business as usual scenarios of the IPCC come to pass.

The inspiring speech by the Marshallese Poet - Kathy Kijiner - at Climate Change Summit in New York last week bought down the house and underlined the urgency of the challenges facing Pacific Island countries – and the urgent need for concerted international action, including at the 2015 Paris Climate Change Convention Meeting – the outcomes of which will be vital for our region.

The US has been playing an important role in helping Pacific countries adapt to a changing climate and rising sea levels. As you will learn tonight from Christina, USAID has 10 climate change focussed projects in the Pacific.

In fact the first Climate Change project in the Pacific was the US Climate Change Country Study in the early 1990's by Dr Robert Dixon, then with the US Department of Energy, now with the GEF Secretariat.

I was honoured to sign an agreement on behalf of SPREP with the US Government at the Pacific Island Forum Meeting in Auckland in 2012 to develop practical climate adaptation projects in our region, working closely with and through USAID.

As a result SPREP and the US Government are working with many partners in the Choiseul Province in the Solomon Islands to better manage and protect island ecosystems as a key front line response to climate change.

As a further result, SPREP and the US Government are also working with partners in the Abiayang Atoll in Kiribati to better conserve and manage water resources – a critical issue in the face of a changing climate.

I am sure that all Pacific countries and territories welcome this practical support as well as the strong commitments by President Obama to the UN Climate Summit last week to reduce US emissions and shift the US to a Green Economy.

These practical response and support are making a real and positive difference for the environment and peoples in our region.

The US has also been taking a leading role on the protection and management of the Pacific Ocean.

The Oceans Summit Convened by US Secretary of State, the Honourable John Kerry, in Washington in June this year has sharpened the focus on the many threats facing our Ocean and the need for urgent action

This message of Oceans as our lifeblood was further underlined by the Pacific Islands Forum Leaders Meeting held in Palau this year which underlined the critical importance of the conservation and sustainable management of the Pacific Ocean.

Many Pacific island countries have made major commitments to protect their marine environments.

I would like to congratulate the Marshall Islands for establishing the largest shark sanctuary in the world.

I would also like to congratulate the United States on major marine initiatives, including last weeks announcement to significantly increase the Hawaiian National Monument.

We hope that the international community and in particular the United States will continue to support Pacific island marine efforts, particularly to support the building on long term capacity and sustainable financing.

Thank you United States for your strong and effective support to the Pacific Islands region over many years.

SPREP is looking forward to strengthening our friendship and cooperation in the future to help Pacific countries and territories better manage and protect their environment to support sustainable development.

Thank you also again for hosting our reception tonight.

Thank also again to the Government and peoples of the Marshall Islands for so kindly and professionally hosting this 25th SPREP Meeting.