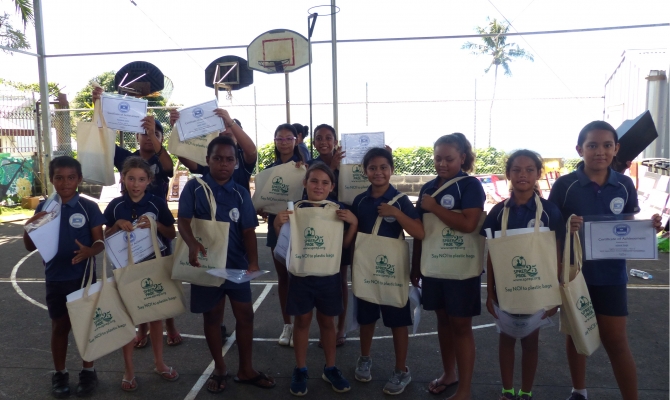 Can an egg bounce? How does helium affect your voice? How many balloons are needed to lift a cat? These are some of the questions students of Vaiala Beach School based their science projects around for the school’s annual Science Fair for 2018.

The Science Fair, held each year at the school for its students from Years 5 to 8, saw a number of very interesting, funny, creative and some complicated projects submitted this year. After judging rounds were held on Wednesday July 15 with a panel of external judges, the school held a small prize giving ceremony the following day.

The Secretariat of the Pacific Regional Environment Programme (SPREP) donated prizes towards the event, and two staff members were chosen as judges.

The Science Fair showcased a variety of interesting and creative science projects. Four judges invited from outside the school and each judge was tasked with picking the top three winners for each class along with other special awards.

The different categories of the awards ranged from Nutrition to Most Original, Principal’s Choice and Highly Commended. Among them, one of the most notable awards was The Environment Award, which was awarded to Year 5 student Dante Senio, who tested the biodegradability of rubbish he collected from a local beach.

The project was titled, “Will the litter on the beach biodegrade?” In Dante’s results, he discovered that most of the rubbish he collected showed no trace of biodegradability or change over the three weeks of his experiment, concluding that most of the rubbish found on beaches will ruin our environment. His suggestion for the future of our beaches and environment was to stop littering altogether, and to dispose of our rubbish properly.

SPREP staff have had the privilege of judging Vaiala Beach School’s Science Fairs in the past, and veteran judge Dr. Frank Griffin noted that the competition has become more difficult with each new year.

“This year the Science Fair was really tough and there were a number of highly complicated and well-thought out projects. It was very difficult to judge, but I congratulate all the students for their hard work. They should all be very proud,” said Dr. Griffin, Hazardous Waste Management Adviser of SPREP and the judge for Year 8 class.

Among the winners at the Science Fair, another student’s project stood out in particular and won not only first place equal for her class, but also the Samoa Conservation Award. Year 8 student Aniva Clarke’s project was titled, “What is the annual Carbon Footprint of Room 8?”

For Aniva’s project, she calculated the total distance each of her fellow classmates travelled to and from school over the course of the year, and calculated not only their collective carbon footprint, but also the offset from planting trees. In total, Aniva found that her class would need to plant 132 trees in order to offset their carbon footprint.

In addition to awarding Aniva this year’s Samoa Conservation Society award, the Society will also be organising a tree planting with Aniva’s class to offset the carbon she calculated in her project.

SPREP wishes to congratulate all the winners of the Science Fair, as well as this year’s winners from all categories and all the students who participated, and commends Vaiala Beach School for another successful Science Fair.

For more information on the Science Fair, including a complete list of winners and awards, please visit https://vaialabeachschool.blogspot.com/2018/08/science-fair-results-2018.html?m=1 or contact Vaiala Beach School teacher Ms Annie Meredith who organised the event: [email protected] or Vaiala Beach School at (+685) 20518.