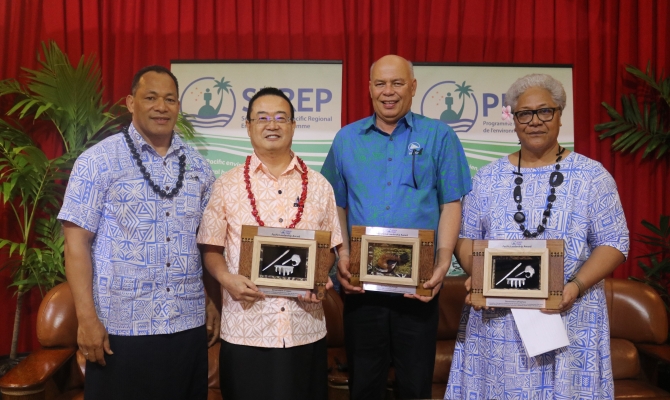 6 September, 2019, Apia, Samoa – Environmental awards honouring the exceptional roles of key people and their governments were presented at the closing of the Secretariat of the Pacific Regional Environment Programme (SPREP)’s Environment Ministers and High-Level Representatives Talanoa today, in Apia, Samoa.

Mr Kosi Latu, Director General of SPREP, expressed his sincere gratitude to the awardees during his closing remarks, acknowledging their respective efforts and contributions to the Pacific region in advancing the work of environmental protection and conservation.

“In recognition of your contribution to building Pacific Resilience, and your commitment and partnership within the region amongst our Pacific islands nations, our leaders and people, SPREP would like to thank you for the years of support and collaboration.”

Dr. Tukuitonga was presented the award by the Chair of the Environment Ministers and High-Level Talanoa, Hon. Fiame Naomi Mataafa, Deputy Prime Minister and Minister of Natural Resources and Environment of the Government of Samoa.

Receiving the Pacific Leadership Award, on behalf of the Government of Japan and in honour of his work during his tenure as the Extraordinary and Plenipotentiary Ambassador of Japan to the Independent State of Samoa, was HE Maugaoleatuolo Shinya Aoki.

“Before your time as Ambassador to Samoa comes to an end, we would like to honour you in recognition of the generous contribution by the Government of Japan for the development of the Pacific Climate Change Centre and commitment to enhancing climate change capacity in the Pacific region,” said Mr Latu.

The second Exceptional Leadership Award was given to HE Lucy Bogari, Papua New Guinea High Commissioner to Fiji and Permanent Representative to the Pacific Islands Forum and Council of Regional Organisations of the Pacific, “In recognition of your service to the region as the SPREP Chair of the First Executive Board Meeting in 2018.”

HE Lucy Bogari unfortunately could not be present to accept her award.

“And finally, our last award which we saved for a special person, we present this award in recognition of the generous contribution by the Government of Samoa for the development of the Pacific Climate Change Centre and demonstrated leadership in addressing climate change in the Pacific region,” said Mr Latu.

“Without the support of Samoa as the host country of SPREP for over 25 years, we could not be the Secretariat we are today, and for this we are truly grateful. Thank you.”

On behalf of the Government of Samoa, Hon. Fiame Naomi Mataafa, Deputy Prime Minister and Minister of Natural Resources and Environment, accepted the Pacific Leadership Award presented to her by the incoming Chair of the next SPREP Meeting to be held in 2021, Hon Dr. Culwick Togamana, Minister of Environment, Climate Change, Disaster Management & Meteorology of the Government of the Solomon Islands.

The awards concluded the 29th SPREP Meeting Environment Ministers’ High-Level Talanoa, with the Deputy Prime Minister, who was also the Chair of the High-Level Talanoa, thanking her fellow Ministers and country representatives for their eager participation and wishing them a safe journey home.