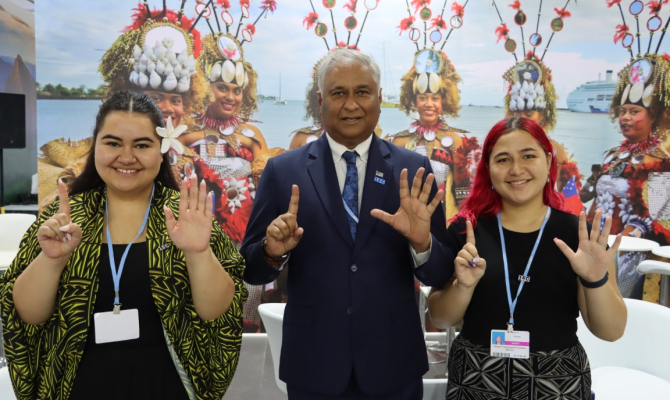 16 November 2022, Sharm el-Sheikh, COP27 - Fiji joins other Pacific Island nations in strongly advocating for the 1.5-degree threshold, that it says, now hangs in a balance.

“As it hangs in the balance, so does the future of small island states, warns Fiji’s Ambassador to the United Nations, Mr Satyendra Prasad.

He reminded the High-Level Panel Tuesday to uphold and implement the decisions enshrined in the Glasgow Climate Pact.

“We cannot let the tides of apathy, ignorance, and injustice drag us back from where we stood only a year ago.

“I also wish to remind parties that we did not make the journey to Egypt to spend too much of our precious time debating commas and full stops –– we must keep our discussions focused on the substance and priorities we are here to uphold.

In Glasgow, Parties agreed to significantly scale up their commitments to reduce emissions by 2030. While we welcome the new commitments that have been announced, too many large emitters are still, stubbornly, working against the imperatives set in Glasgow.

“These commitments need to be locked as well in domestic regulations as we have done in our Climate Change Act in Fiji. And we urge all countries to do so as well.

“The world is barreling down the highway to climate hell, as the UN Secretary-General warned us.

“It isn’t Fiji’s foot on the gas pedal, nor that of any other small island state. We are passengers –– or more like hostages –– trapped in a vehicle that is being recklessly steered by the high emitters. With hell on the horizon, we are told to trust a driver who we can see is blinded by greed and deaf to our pleas.”

“Our nations are the most exposed. Our nations are those who will lose the most. But we will not be the last. We share a planet. We will all share the same horrific future, if we stay this course, warned Ambassador Prasad.

The Fijian diplomat who is leading the country’s delegation at COP27, said Pacific countries are asking for something tangible in addition to the assurances that we will soon slow down and change course.

“We have asked that the definition of climate financing be matured to incorporate our needs and specifically that financing for addressing loss and damage be established under a financial mechanism. Simply put, we have asked the world to open its eyes and see that Fijians and other vulnerable people already have a glimpse of the climate hell we’re headed for.

“We are facing the loss of livelihoods, of land and of fundamental cultural and traditional assets.  For those where loss is irreversible, where emissions are negligible, where adequate financing has failed to flow, where the insufficiency of global mitigation efforts are most closely felt – this request is in the global interest. It is in the interest of the principles of the convention, of security, and of global economic stability, said Ambassador Prasad.

“The Paris Agreement will be our epitaph in a world that crosses the 1.5-degree threshold. Fiji implores all parties to realise where we are and what it means for where we are going. We cannot allow an Agreement focused on solutions to be out paced by the problems those solutions are designed to address, he said.

This story was written by Makereta Komai, PACNEWS Editor in Sharm El Sheikh. Her attendance at COP27 is supported by SPREP and Irish Aid.