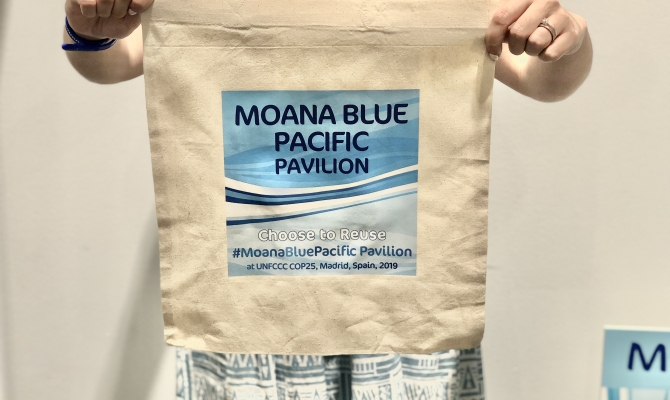 3 December 2019, Madrid, Spain – As guardians of the world’s largest oceans, the Pacific islands have shown global leadership in tackling the problem of plastic and marine pollution, with several Pacific islands implementing bans on various types of single-use plastics in a bid to reduce the amount of waste that eventually ends up in the Pacific ocean.

At the 25th Conference of the Parties to the United Nations Framework Convention Parties (UNFCCC COP25), the dedicated space for the Pacific, the Moana Blue Pacific Pavilion, is continuing on with these efforts by promoting good waste management practices and environmentally friendly events, which will be awarded using a Blue Wave Rating system.

The first Blue Wave Rating for events held at the Moana Blue Pacific Pavilion were awarded during the first day of COP25 and also the first day of operation for the Pavilion. One event came out as an Ocean Champion – achieving a full five Blue Waves for good waste management practices.

The Ocean Champion event was the first event to be held at the Pavilion – Innovating for Ocean Protection event hosted by the Ultra Marine Ocean Action Summit.

The five Blue Waves were awarded for ensuring there was fast set up and clearing; distributing less paper resources, opting for digital resources instead; keeping within time; cleaning the venue after the side event and demonstrating Pacific, gender and youth inclusiveness.

The Fijian Government’s Friends of the Ocean and Climate side event, which was also held on the first day of COP25, achieved a four Blue Wave for their rating.

“So far we have had a great response to our Blue Wave Ratings systems, with events that have been adhering to our side event guidelines of bringing in no single-use plastics and cleaning up and taking out any waste they bring into the Pavilion,” said Ms Audrey Brown-Pereira, Curation Manager of the Moana Blue Pacific Pavilion.

“It is our hope that we can encourage these good behaviours and practices through the Moana Blue Pacific Pavilion and to encourage the transitioning to more green events going forward.”

It is estimated that over 150 million tonnes of plastics have accumulated in the world’s ocean and that approximately 80% of this waste is from land. It is also estimated that there will be more plastic than fish in our oceans by the year 2050.

The Moana Blue Pacific Pavilion at the UNFCCC COP25 is a Pacific partnership, supported by the Government of New Zealand, with Fiji, and is being implemented by the Secretariat of the Pacific Regional Environment Programme (SPREP).