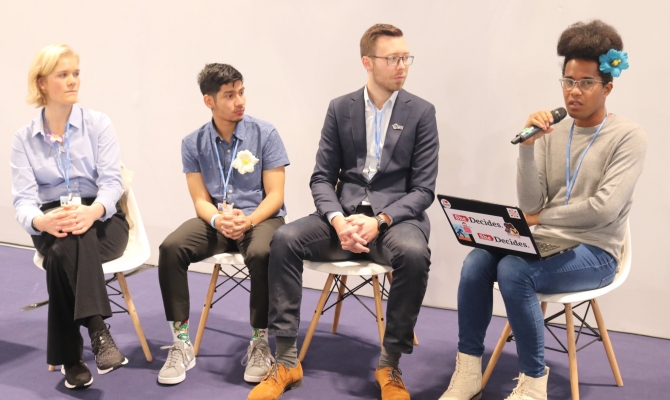 6 December 2019, Madrid, Spain - A short film based upon the stories from gender minorities  before and after Tropical Cyclone Winston in 2016 will be launched at the Twenty-fifth Conference of the Parties to the UN Framework Convention on Climate Change now underway in Madrid, Spain.

“Not Without Us:  Women and Sexual and Gender Diverse People Experience”, produced by Tamani Rarama gives voice to the stories of discrimination in everyday life that creates vulnerabilities before disasters, as well as the challenges faced as sexual and gender minorities in surviving and recovering from Tropical Cyclone Winston.

“Post disaster, when relief was being disbursed after TC Winston, a lot of the sexual and gender minorities were marginalised because of who they were, a lot of them were wrongly blamed for the Tropical Cyclone.  There was a lot of unfair stigma on community on those that are marginalised,” said Tamani Rarama of the Fiji Youth Sexual and Reproductive Health and Rights Alliance, currently at the COP25.

“Bringing their direct voices in a documentary in this space, I hope it would bring an empathy so they are not victims when it comes to these impacts.”

The short film is based upon the “Down by the River Addressing the Rights, Needs and Strengths of Fijian Sexual and Gender Minorities in Disaster Risk Reduction and Humanitarian Response” report developed by Oxfam.  This was the culmination of three session of community-mapping, story-sharing and traditional talanoa in May 2017.  It led to 30 stories that resonate with the experiences of sexual and gender minorities in disasters across the world.

“I wanted to help visualise the report, bring it to life in film so people could see the challenges this discrimination brings,” said Rarama.

“It wasn’t fair that many sexual and gender minorities could not access services such as evacuation centres in communities."

Here in Madrid at COP25, Tamani Rarama is also following the negotiations as part of the Gender CC Women for Justice, wanting to enhance gender inclusiveness and consideration across all negotiation issues.

"Pacific LGBTQI+ activists and organisations are leading some of the important work on Climate Action in our region. It is only just that we are brought into this COP spaces to equally negotiate and put across our issues. We are not demanding special rights here but merely asking for our basic equal rights. We do so because we face more than double the discrimination and violence especially in such vulnerable situations of climate disasters".

Rarama is hopeful there will be stronger language in the final text negotiated at COP25 that reflects all Human Rights so marginalised groups are encompassed, especially when it comes to Article 6 – Markets and Non-market mechanisms.

“While there is a need for gender diverse language reflected in the UNFCCC COP process, we don’t want to leave anyone behind and so it’s best to ensure we include human rights language and that is a challenge right now. ”

“Not Without Us:  Women and Sexual and Gender Diverse People Experience” will be launched during the second week of COP25.  It was funded by the Gender CC Women for Justice, Life e.v and Rosa Luxemburg Stiftung.

The Twenty-fifth Conference of the Parties to the UN Framework Convention on Climate Change is held in Madrid, Spain from 2 – 13 December, 2019.