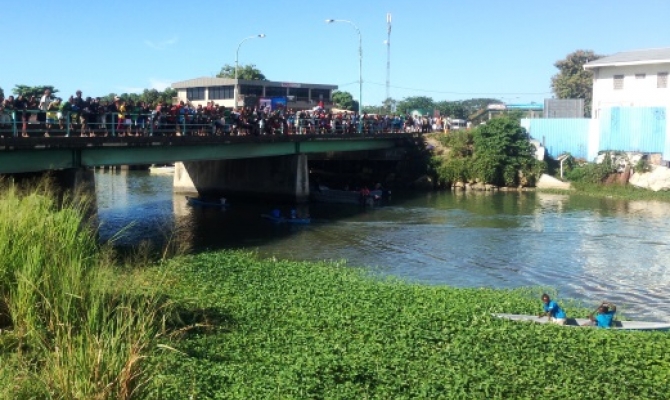 General News
The canoe race was the first of its kind on the river to show the recreational potential of the river and the importance of restoring and rehabilitating the river ecosystem.

Solomon Islands celebrated the World Environment Day by organising partners and stakeholders for a day of clean-up of the Mataniko River in Honiara on the 9 June this year. The event also marked the World Oceans Day and the Coral Triangle Initiative Day with the Ministry of Environment and Ministry of Fisheries co-hosting the programme.

The Mataniko River activity attracted different organisations to help with the clean-up of the river which was followed by an organised canoe race that drew hundreds of spectators to river bank. The canoe race was the climax of the day, with both men and women's races held. 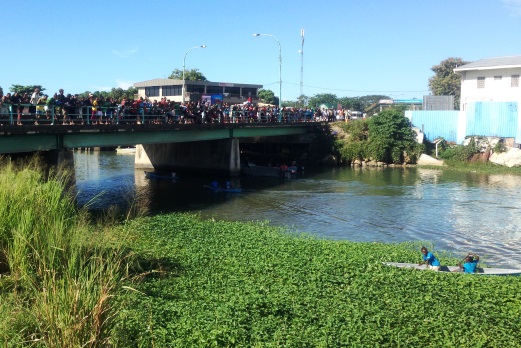 Canoe races in the Mataniko River in Honiara

Speaking during the event the Permanent Secretary of the Solomon Islands Ministry of Environment, Climate Change, Disaster Management and Meteorology, Dr Melchior Mataki stressed that the canoe race was the first of its kind on the river and was purposely done to show the recreational potential of the river and the importance of restoring and rehabilitating the river ecosystem.

He further stated that this is also part of changing the public perception of the river especially the communities living along its banks and that the Mataniko River Health project implemented by his ministry shows the governments' long-term commitment.

In 2015, with funding from the Noumea Convention, the Secretariat of the Pacific Regional Environment Programme (SPREP) helped install three 20 metre booms at different points within the River to collect the waste and trash that flowed downstream as part of the Mataniko River Health Project. 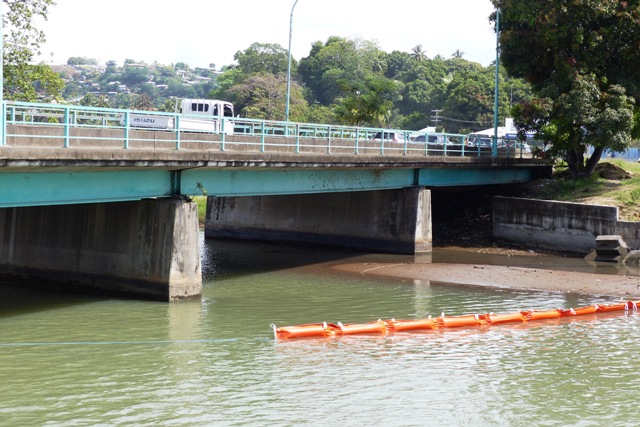 Installation of booms along the Mataniko River in 2015

A range of community consultations was also held to explain how the booms were collecting the rubbish as well as how to sort the collected waste, record it and dispose of it properly. SPREP then funded 12 months of rubbish collection and sorting of this waste by the community, SPREP also helped install rubbish bins for each household and transfer stations to hold the collected waste until rubbish collection.

The funded rubbish collection and sorting comes to an end next month in July for which SPREP is now exploring options for continuing support.

Mr Fred Patison representing SPREP and the Pacific Ecosystem-based Adaptation to Climate Change (PEBACC) project was also full of praise for the initiative.

"This has been an amazing initiative undertaken by the government and people of Solomon Islands and we look forward to supporting such activities as part of our work once we have finalised the ecosystem-based adaptation plans for action for Honiara," said Mr Patison.

PEBACC focusses on strengthening and protecting the role of natural ecosystem services to enhance resilience to climate change with activities in Fiji, Solomon Islands and Vanuatu. Using these natural solutions is also called ecosystem-based adaptation (EbA).

"In order to have a deeper understanding of the resilience and vulnerability in Honiara we'll look at the interconnectedness of social and ecological systems and how these are being impacted by climate and non-climate drivers, to do this we'll be conducting Ecosystem and Socio-economic Resilience Analysis and Mappings (ESRAM) in Honiara which will help us plan for the right actions to use EbA to address the climate change impacts felt."

He also expressed the fact that once EbA implementation plans are formulated, PEBACC will be able to contribute to such public awareness events in the next few years to encourage ecosystem management approaches for Honiara city.

The two-day World Environment Day celebrations concluded with a dinner hosted by the Ministry of Environment, Climate Change, Disaster Management and Meteorology at the Heritage Park Hotel to acknowledge the participation of all stakeholders and partners.

The PEBACC is a five-year project which began last year and is funded by the German Federal Ministry of the Environment, Nature Conservation, Building and Nuclear Safety (BMUB) and is implemented by SPREP in partnership with the Governments of Fiji, Solomon Islands and Vanuatu.