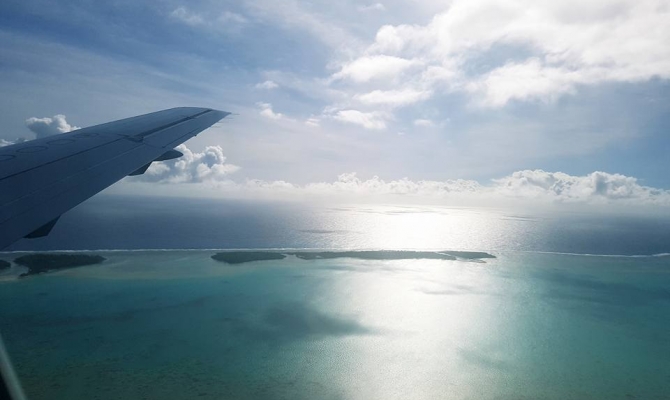 It is common for many Pacific islands to be considered too small to even feature on many global maps, yet despite this, one Pacific island nation is proving to be so large in heart and conviction their presence will not be denied, whether or not they are remembered on a map.

Sitting in the world’s largest of the five oceans, the Cook Islands consists of 15 islands that are home to a population of close to 17,500 people according to the last Census in 2016. Having been labelled as the “Last Heaven on Earth” over the years, the Cook Islands has undertaken a remarkable feat, in legally declaring all of its Exclusive Economic Zone, that is close to two million square kilometres of water, as a Cook Islands multi-use Marine Park.

The marine park known as Marae Moana, literally translated as Sacred Ocean, was legislated in July, 2017.  This includes a 50 nautical mile exclusion zone around each of the 15 islands which are no-take fishing zones protected under Marae Moana, leaving this for island communities to use.

The Cook Islands rightly prides itself that Marae Moana is currently the largest commitment by a single country for integrated management and conservation from ridge to reef, and from reef to ocean.

It is this holistic thinking that when implemented well, will bring about great benefits for future generations, one of the key motivators for the Prime Minister of the Cook Islands Hon. Henry Puna to bring Marae Moana into being.

"Mankind only has one earth, one atmosphere, and one global ocean. One last chance to save it all for future generations," presented the Hon. Prime Minister Puna of the Cook Islands at the UN Ocean Conference in June, 2017.

“It is in our DNA to conserve our ocean.”

Much work was done throughout the Cook Islands by many on the voyage to see Marae Moana become reality.

One key area was to ensure ownership of Marae Moana, including nationwide consultations across all inhabited islands, not an easy feat considering some were only reachable by boat and the airfares to some of these islands can cost more than round the world airfares.  One of the more colourful tales stemming from the consultations include the stranding of some on one of the islands for over a month!  Yet despite it all, there was perseverance to seek the input from as many Cook Islanders as possible.

“At every stage of building Marae Moana there were a lot of consultations, we saw this as an important step, and it wasn’t just government that made up the teams, it also included NGO’s and major support from our traditional leaders,” said Mr Kevin Iro, Marae Moana Ambassador.

“This took a lot of time and was a very costly exercise but it was crucial that we did this the right way, from the very start.  Marae Moana belongs to all Cook Islanders, so everyone should have a say on how we manage it.”

Since its announcement in 2012, the Cook Islands are putting into action a legacy that moves beyond being a ‘paper park’.  Internal governance structures with strategies and guides have been established with cross political principles, the consultative process with Cook Islanders is ongoing, and above all at every step there has been transparency – a key part of Marae Moana to help enhance national ownership.

“For us this is a long term investment for our people,  we know it is bigger than us, it’s about leaving a legacy in place that will help us all in the long run, and if we want to do it well, we must do it right,”   said Ms Jacqui Evans, Marae Moana Director.

“We involve many different people and at all times we are clear and transparent, it doesn’t belong to just a few of us, Marae Moana belongs to all of us.”

Transparency is key as the owners, the people of the Cook Islands, try to understand the concept of a multi-use marine park.  Marae Moana does allow development within zoned areas of the EEZ based upon the principle that it is done sustainably and is not detrimental to the marine environment.  With sea bed exploration considered by the Cook Islands Government and large commercial foreign fishing licenses granted, how Marae Moana is implemented is of interest to many.

Similar to the Great Barrier Reef of Australia, zones will be drawn up for specific activities, these will be defined by the wants and economic, cultural, social and environmental needs of Cook Islanders. For example,  zones could be ‘no-anchoring’ areas to protect sensitive reefs, sanctuaries to allow animals to breed, habitat protection areas to protect the homes of fish or to protect sea turtle nesting beaches, sustainable fishing areas, areas for no fishing, areas for manganese nodule collection or no collection , and areas designed to protect endangered species from extinction. These zones will only be established with the support of local communities and under the governance of Marae Moana Council and its Technical Advisory Group.

“We are currently looking at mapping all areas of the EEZ as a Marine Protected Area and we will then work from that baseline, if and when approved there will be areas that allow industry, seabed exploration and fisheries,” said Mr Iro.

“Prior to Marae Moana, our EEZ was wide open to exploration and potential mining of manganese nodules on a considerable scale,  but our government seabed minerals authority (SBMA) has since realised that designating specific blocks for nodule collection that fall outside of islands jurisdictions have eased the ‘fear’ that many Cook Islanders have about this industry. This type of inter-agency cooperation shows that Marae Moana is already bearing fruit in its infancy”.

Ongoing steps for Marae Moana include finalising and securing a sustainable financing mechanism.  Lessons learnt from other large scale Pacific Marine Protected Areas are being taken into consideration as the team explore options which would be most relevant to the Cook Islands in the long term.

“As with all things there is a cost and we are scoping different options available for the best fit for Marae Moana and the Cook Islands,” said Ms Evans.

“We recognise the work done by our Pacific family in their endeavours and are learning from them, such as the Micronesia Challenge and their endowment fund, and the Palau Green fee and its role financing their Protected Areas Networks.  We are learning from them and others, the challenge is now upon us to put in place a sustainable financing mechanism that will suit us.  We know we will get there.”

It has been a long voyage thus far for Marae Moana with many milestone achievements made and many more yet to come.  The voyage has included a strong crew of many people from within the Cook Islands who have contributed to its success to date and will continue to do so over the long haul. While Marae Moana may mean many different things to many different people one sentiment rings loud.

“Cook Island ancestors understood that it was important to be good to the ocean, then she will be good to you.  We should respect and conserve our ocean and we are.  She is sacred to us.” – Kevin Iro Marae Moana Ambassador.

Marae Moana was showcased by Kevin Iro at the regional inception workshop of the Biodiversity and Protected Areas Management (BIOPAMA) programme which was held from 11 – 15 June in Samoa.

The BIOPAMA programme aims to improve the long-term conservation and sustainable use of natural resources in African, Caribbean and Pacific (ACP) countries, in protected areas and surrounding communities. It is an initiative of the ACP Group of States financed by the European Union’s 11th European Development Fund (EDF), jointly implemented by the International Union for Conservation of Nature (IUCN) and the Joint Research Centre of the European Commission (JRC). Building on the first five years of activities financed by the 10th EDF, BIOPAMA’s second phase provides tools for data and information management, services for improving the knowledge and capacity for protected area planning and decision making, and funding opportunities for specific site-based actions.

The PIPAP is the region’s one-stop resource hub to support decision-making, more effective protected area management and governance, and biodiversity conservation in the Pacific region. The PIPAP develops capacity of all stakeholders involved in protected and conserved area management. It supports the use of the best available scientific data and information. It is hosted by SPREP and functions as one of the regional ‘observatories’ of BIOPAMA. pipap.sprep.org