New MoUs to strengthen marine protection in the Pacific region 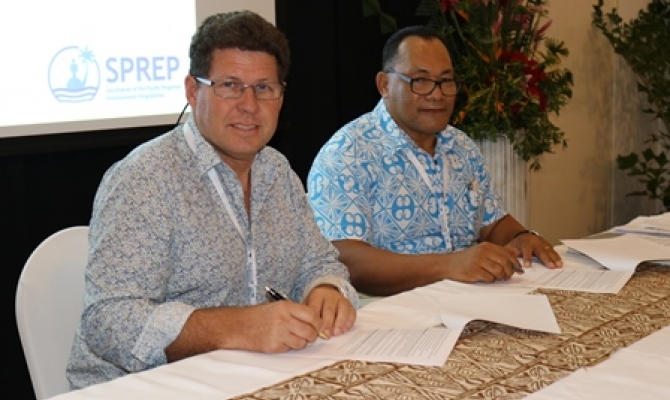 Island and Ocean Ecosystems
The Whales in a Changing Ocean Conference gave us much to celebrate. Two new agreements were signed between the Secretariat of the Pacific Regional Environment Programme (SPREP), one with Blue Planet Marine (BPM) and the other with the South Pacific Whale Research Consortium (SPWRC).

The MoU with BPM sets out to provide a framework for cooperation between the two organisations for the next five years, where they will be collaborating in the implementation of surveys for marine biodiversity, such as Rapid Biodiversity Assessments, surveys for large marine megafaunas such as whales, dolphin, and dugongs, and mapping for potential Marine Protected Areas. 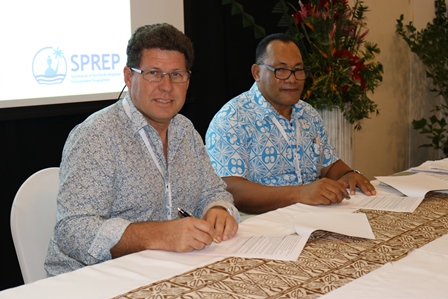 "These are steps, or shall we say we are swimming, in the right direction," said Mr Michael Donoghue, SPREP's Threatened and Migratory Species Adviser.

"Both will help bring about some positive happenings in the region for our Pacific islanders. We will be looking at the training opportunities these may be able to bring, providing our SPREP island members with the skills to carry out research at the national level, and so much more."

The second MoU with SPWRC, also for a period of five years, looks to strengthen the partnership between the two organisations as they work in collaboration to ensure the protection of cetaceans as well as providing advice to governments to strengthen the Pacific's capacity to protect cetaceans in the region. 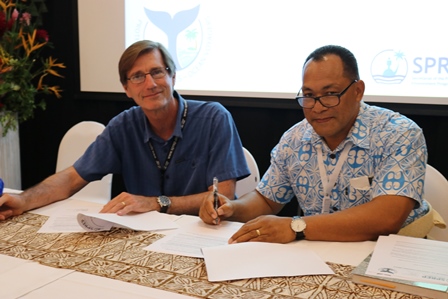 Mr Scott Baker, Principal Investigator of the SPWRC signed the MoU on behalf of the Consortium.
Photo: SPREP

The work programme agreed to in the MoU includes the provision by the Consortium to SPREP of updated information on the status of stocks of cetacean species and results of cetacean research in the region, as well as capacity development amongst Pacific islands and territories through annual meetings of the Consortium, workshops organised by SPREP and opportunities to join field research arranged by the Consortium.

"We look forward to the outcomes of these MoU's and the strengthened capacity of our Pacific island people to help marine mammal conservation," said Mr Donoghue.

Both MoUs were signed on the final day of the Whales in a Changing Ocean Conference which was held in Nuku'alofa, Tonga from 4 – 6 April, 2017.