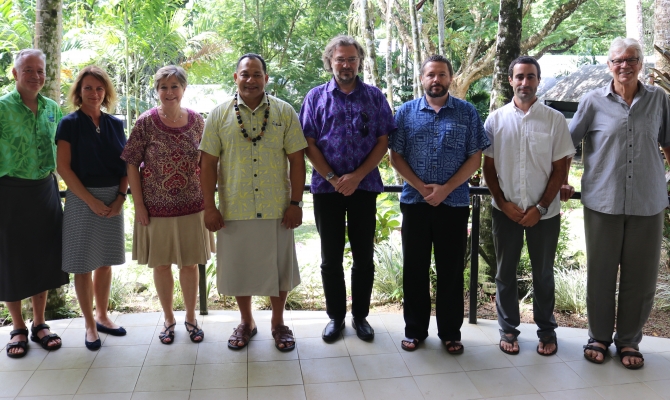 Climate Change Resilience
The Deputy Foreign Minister of Norway, Ms Tone Skogen, paid a visit to the Secretariat of the Pacific Regional Environment Programme last week. Ms Skogen, who was accompanied by H.E Ambassador Unni Klovstad and Professor Edvard Hviding of the University of Bergen, met with SPREP Director General, Mr Kosi Latu, and a few of the SPREP staff to discuss climate change and oceans work in the Pacific region.

The delegation were presented with an overview of SPREP's engagement on climate issues and preparations for the United Nations Oceans Conference, to be held in New York in June this year.

The Norwegian delegation with SPREP staff at the SPREP headquarters, Vailima. Photo: SPREP

The Deputy Foreign Minister thanked the SPREP delegation which briefed them on SPREP's preparations, and assured them that this would be the first of many regular visits to the region, as a symbol of their commitment to connect to the commonly shared concerns over climate change and oceans management.

Professor Hviding also outlined some practical first steps that could be taken jointly in ensuring that climate change science information from the Pacific islands is elevated to the level of the Intergovernmental Panel on Climate Change. The delegation left Samoa on Thursday.