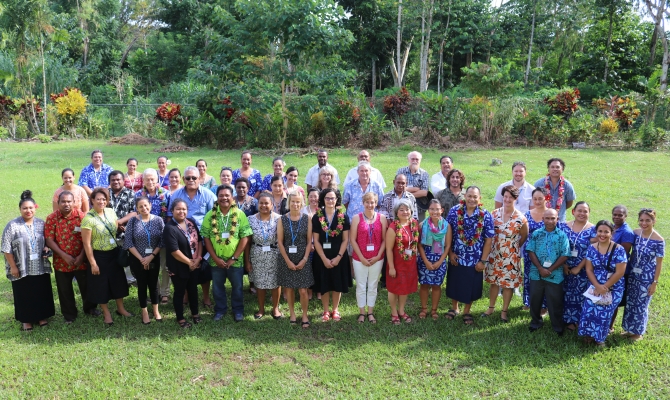 Thousands of species are traded internationally for medicinal, health, food, tourism, cosmetic and, or fashion purposes. One of the world’s most powerful tools for wildlife conservation is done through the regulation of trade in plant and animal species – the Convention on International Trade in Endangered Species of Wild Fauna and Flora (CITES). With 183 country parties, CITES regulates the international trade of over 36,000 species of plants and animals including many marine species that are important to the Pacific region.

The Secretariat of the Pacific Regional Environment Programme (SPREP) in collaboration with the Government of Samoa, Wildlife Conservation Society, The Pew Charitable Trusts and the CITES Secretariat, is hosting the Oceania Regional Preparatory Meeting for the Eighteenth Conference of the Parties (CoP18)  to the Convention on International Trade in Endangered Species of Wild Fauna and Flora (CITES), happening this week from 25 – 27 March in Apia, Samoa.

The Pre-COP meeting brings together government officials from 10 countries in the Oceania region: CITES Parties Australia, Fiji, New Zealand, Palau, Papua New Guinea, Samoa, Solomon Islands, Tonga, Vanuatu and Niue, a non-party. The main objective of the preparatory meeting is to provide a forum for the parties to come together to discuss key regional priority issues and prepare for the CoP18 meeting which will be held in Colombo, Sri Lanka in two months.

“A key part of this meeting will be to strengthen the Pacific’s engagement at COP meetings, and in particular the One Pacific Voice which has been an effective approach adopted by Pacific island countries at previous COP meetings,” said Mr Kosi Latu, Director General of SPREP at the opening of the meeting.

“I encourage you all to use this opportunity to discuss your national priorities in order to agree on our key regional issues and priorities, and raise this as One Pacific Voice.”

At the last CITES Conference of the Parties, the successful listing of four threatened shark species and nine mobula ray species on Appendix II were championed by Pacific countries. The upcoming CoP18 meeting, Fiji, Palau and Samoa are co-sponsoring the mako sharks, giant guitarfishes and wedgefishes proposals that will be consider for Appendix II listing. Once again the Pacific is continuing the momentum of protecting sharks and rays that play an important role in the marine ecosystems.

Chief Executive Officer, of the Ministry of Natural Resources and Environment of the Government of Samoa Ulu Bismarck Crawley, encouraged participants to use the Pre-COP meeting as an opportunity to share information and create a positive space for discussion on what is needed now and what more we should be doing as a region to ensure a brighter future for all critical and iconic species.

This was further encouraged by the CITES Secretariat.

“As you will see at the CITES COP18 in two months in Colombo, Sri Lanka – with a total of 107 working documents, and 57 species listing proposals, there will be many issues that are of significant relevance to the Oceania region,” said Ms Haruko Okusu, Chief of Knowledge Management and Outreach Services of CITES Secretariat.

“One of the benefits of this pre-cop meeting is for you to find which issues and proposals are of particular interest to your region, so you can work together in preparation of the CoP18.”

The Pacific Regional Preparatory Meeting for the Eighteenth Conference of the Parties to the Convention on International Trade in Endangered Species of Wild Fauna and Flora (CITES), will run from the Monday 25th to Wednesday 27th of March at the SPREP Campus in Apia, Samoa.

For more information on this meeting, or the CITES COP in Sri Lanka, please email Ms Juney Ward ([email protected]).