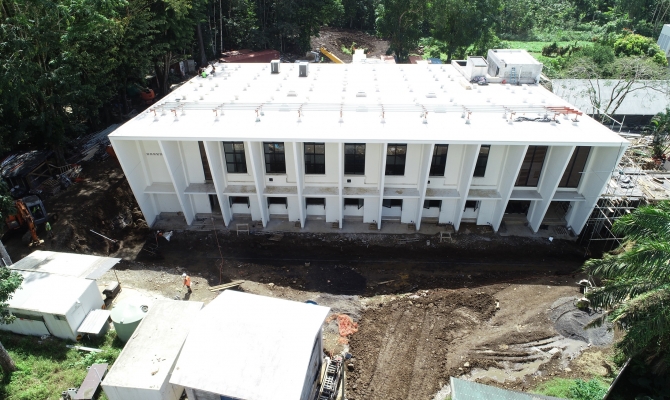 7 August 2019, Apia, Samoa – The construction of the Pacific Climate Change Centre (PCCC) will be complete in early September, according to a report by Secretariat of the Pacific Regional Environment Programme (SPREP) General Director Kosi Latu.

Mr. Latu delivered his report on the PCCC to fifth meeting of the Pacific Metrological Council (PMC-5), on 7 August in Apia Samoa.

“I am pleased to announce we are near the completion of this effort.”

The PCCC will be a regional centre for climate change information, research and innovation. Mr. Latu stated it will allow for the development of innovative solutions to the challenges of climate change facing the Pacific islands.

The work of the PCCC is directly linked to achieving the SPREP strategic plan, developed in consultation with SPREP Members through a wide range of services and will pursue multiple goals, including; knowledge brokerage, applied research, capacity building, and innovation.

Partnerships, of governments and scientific institutes, will be a key part of the centre’s future. It will facilitate the sharing of information by scientists. Indeed, an important function of the centre will be to build and strengthen such international relationships.

“It’s a centre that will be a catalyst for innovative action on climate change,” said Mr. Latu. “The big picture is it an initiative aimed to build the resilience of our all of our countries.”

The PCCC is a commitment of the Pacific Leaders Meeting (PALM 7) by the Government of Japan, which supports the regional efforts for tackling climate change in the Pacific. The PCCC is a partnership between the Governments of Japan and Samoa. It is funded under grant aid through JICA for Samoa as the host country of SPREP

“We thank you for helping us push through this important development for the region,” said Mr. Latu.

Construction on the facility, located on the SPREP campus in Apia, Samoa, began last year with a special ground-breaking. The building itself is being constructed according to green guidelines. This initially included a goal of having 50% of the energy driven by solar panels. However, during the report to PMC-5, Mr. Latu stated that modifications meant an expansion of solar panels, going from generating 20-kilowatts to 100-kilowatts for the new building.

The PCCC is expected to be completed by the first week of September, 2019.  There will be a special opening event during the 29th SPREP Meeting in Samoa.