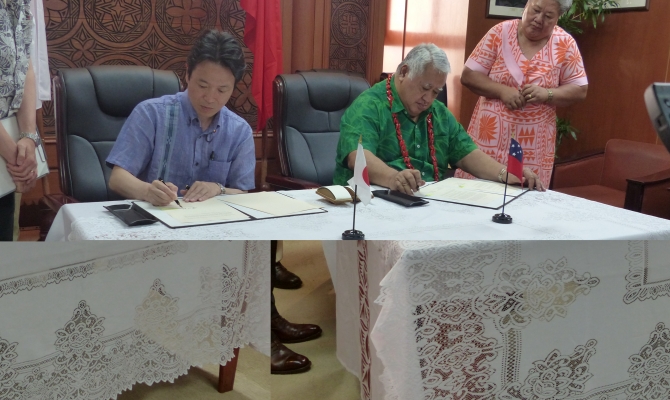 29 July 2016, Apia, Samoa - The Governments of Japan and Samoa with SPREP have sealed their partnership and commitment to building the Pacific Climate Change Centre (PCCC) at the campus of the Secretariat of the Pacific Regional Environment Programme (SPREP) in Samoa.

It was first announced in the Seventh Pacific Islands Leaders Meeting (PALM 7) Declaration in 2015 where the Government of Japan shared its commitment to the Pacific to provide comprehensive assistance through SPREP, for the development of the Pacific Climate Change Centre and capacity-building. This supports the efforts for tackling climate change by the Pacific region as a whole.

Senior Officials from the Japanese Government, including the Parliamentary Vice Minister for Foreign Affairs, His Excellency Mr Masakazu Hamachi, have signed the 'Exchange of Notes' with the Honourable Prime Minister of Samoa, Tuilaepa Lupesoliai Sailele Malielegaoi, effectively ending the preparatory stage and launching the building stage of the PCCC. 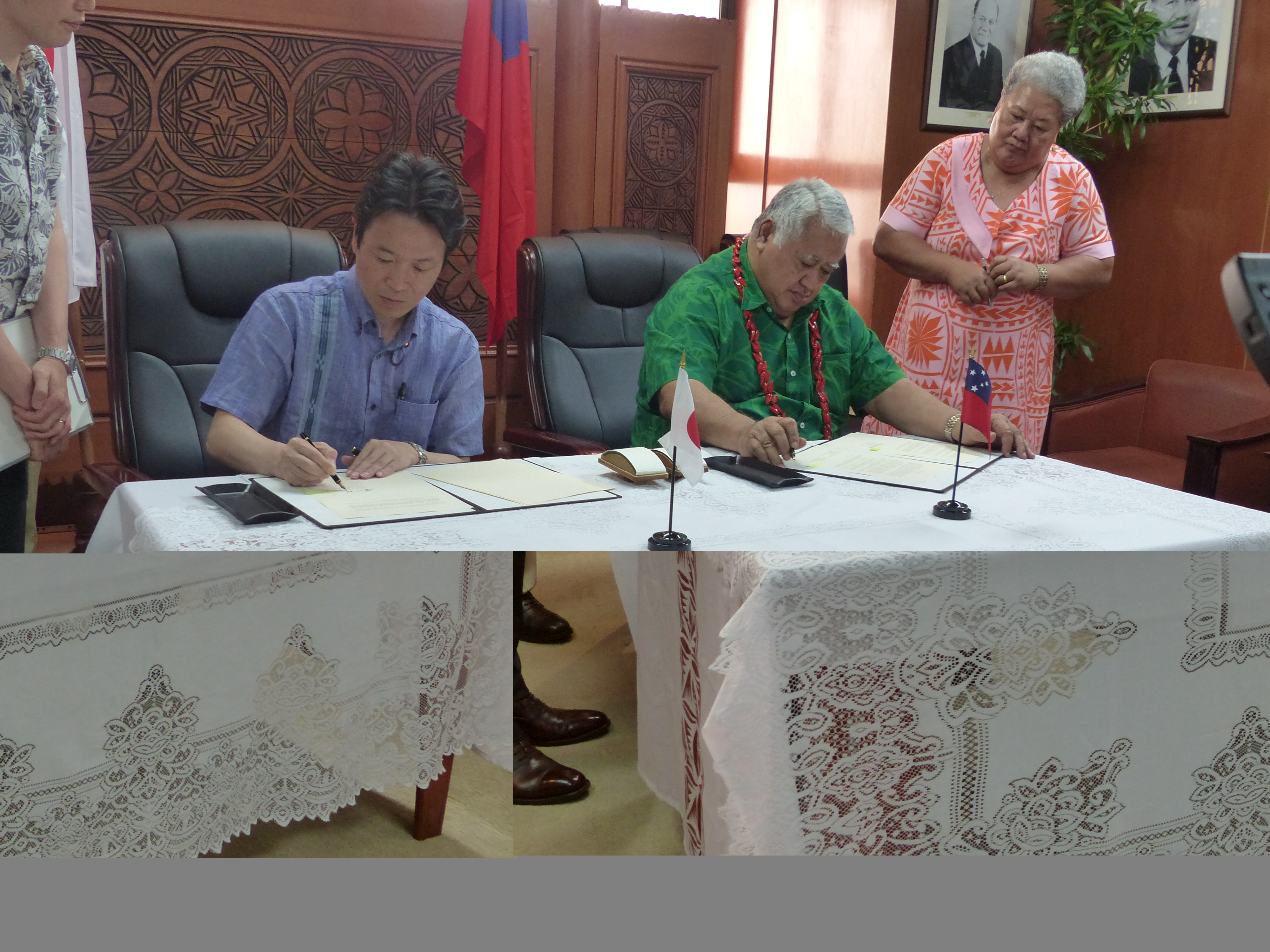 "I would like to thank the Government of Japan for partnering with Samoa in the development and funding of the Pacific Climate Change Centre. The centre will provide immense benefits for us as we face the many challenges associated with climate change," said the Honourable Prime Minister of Samoa, Tuilaepa Lupesoliai Sailele Malielegaoi.

"Climate change is the single most pressing issue that we as a region have to face, so Japan's Support in funding the PCCC will go a long way in helping us all address the impacts of climate change in Samoa and in other Pacific nations."

The Pacific Climate Change Centre will be a regional hub of excellence for the coordination of climate change initiatives in the Pacific region. It will bring together SPREP members and partners including peer agencies from the Council of Regional Organisations of the Pacific with researchers, scientists and scholars. The PCCC will be the hub for the sharing of information and coordination of actions to help Pacific island countries and territories address the vast challenges of climate change they now face. 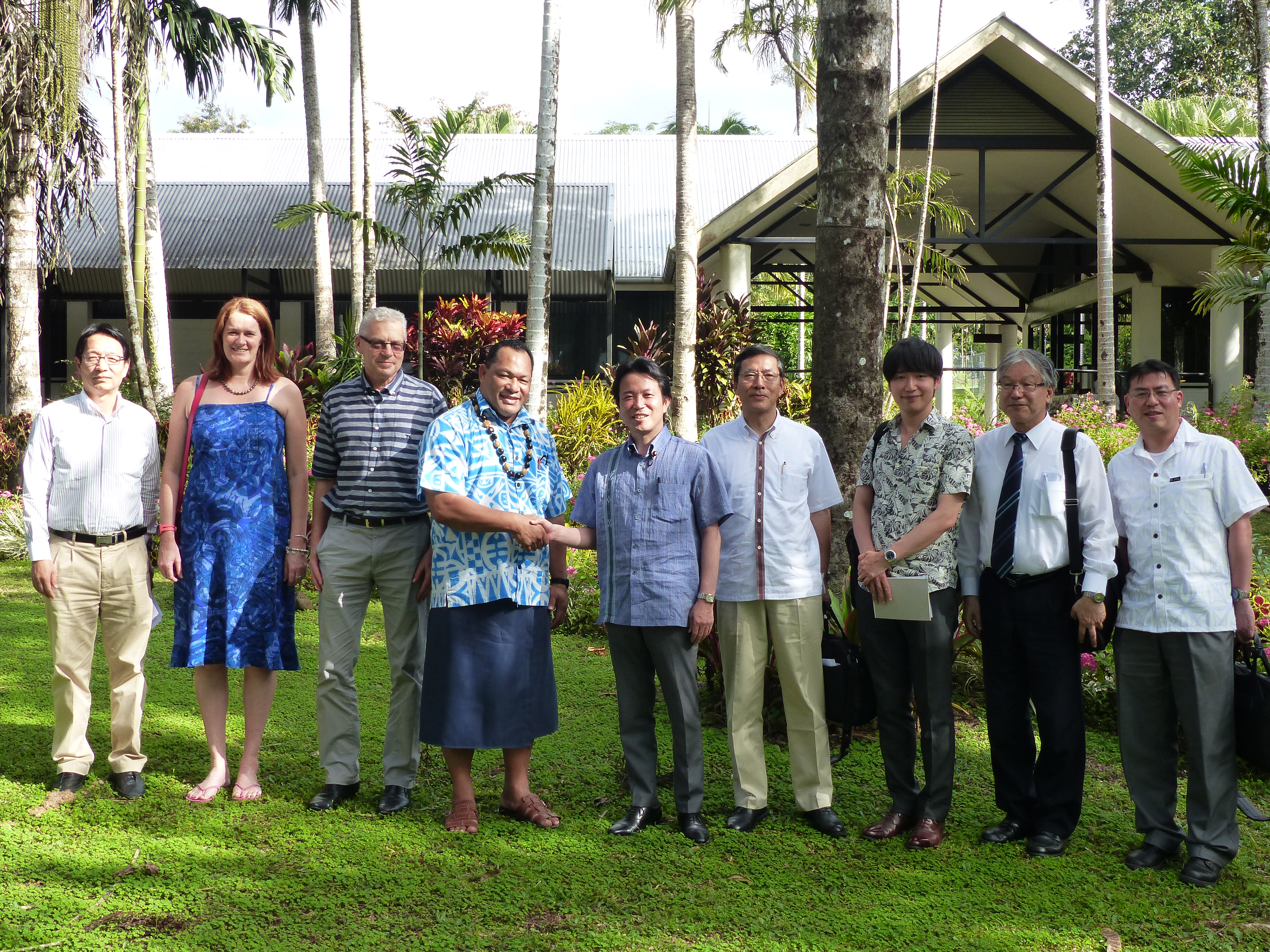 The Japanese delegation welcomed by SPREP Director General and staff at the SPREP campus.
Photo: SPREP

"Japan has been supporting measures taken by Samoa and SPREP for sustainable development," said His Excellency, Mr Masakazu Hamachi.

"This project is to construct the Pacific Climate Change Centre at SPREP by Japan's Grant Aid, with a view to strengthening measures against climate change in Pacific island countries. Japan continues to strongly support the sustainable development of Pacific Island States including Samoa through official development assistance and other measures."

The PCCC will enhance opportunities for Pacific island members to access climate finance, better coordinate adaptation and mitigation measures and build capacity in climate change science and meteorology, through a dedicated training space and education and outreach programmes.

After the signing, the Japanese delegation from the Ministry of Foreign Affairs headed to the SPREP campus to pay a courtesy call to the Director General of SPREP, Mr Kosi Latu, touring the campus and visiting the site of the PCCC.

"The Pacific Climate Change Centre will belong to us all across the Pacific island region. It will be our Pacific island centre for collaboration and a conduit for all climate change work as we fulfil our mandate given by our Pacific leaders as the coordinating agency of climate change work in the Pacific," said Mr. Kosi Latu, the Director General of SPREP.

The proposed Pacific Climate Change Centre to be built at the SPREP Campus, Vailima.

"Amongst other things, SPREP will bring our role as an Implementing Agency for the Adaptation Fund and the Green Climate Fund to access climate financing, our role as the host of the Pacific Met Desk Partnership as well as our solid foundation of networks and relationships across the many oceans, to ensure the PCCC is successful in helping our Pacific island communities."

Tendering for materials and development of the site will begin early next year, with construction of the PCCC due to begin in June, 2017. The PCCC will be constructed in line with environmentally friendly designs including rainwater harvesting, anaerobic digesters and water saving bathrooms, and is expected to be completed in July, 2018.

The signing of the Exchange of Notes between the Governments of Japan and Samoa took place at the Government Building in Apia, on 29 July 2016.