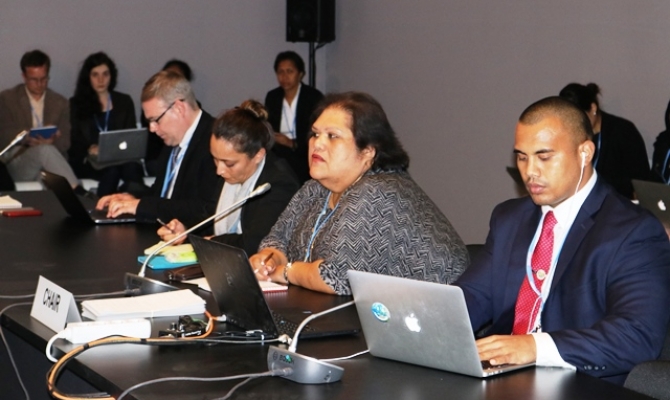 Climate Change Resilience
7 November, 2016, UNFCCC COP22, Marrackech, Morocco - While women accounted for around 35% of all national party delegates at the 2015 UN climate conference and women's participation in Eastern and Western Europe is 45% and around 21% in Africa and the Asia-Pacific, the Pacific island region itself can boast of strong women participation, particularly in key roles.

This participation is further supported by the Women's Delegate Fund (WDF), who undertook research resulting in the above statistics. The WDF aims to enhance women's participation at the UN Climate Conferences through supporting travel costs of women from Developing Countries, coupled with the coordination of a Night School to help prepare delegates for the coming negotiations as well as ongoing policy support on gender issues during the conference. 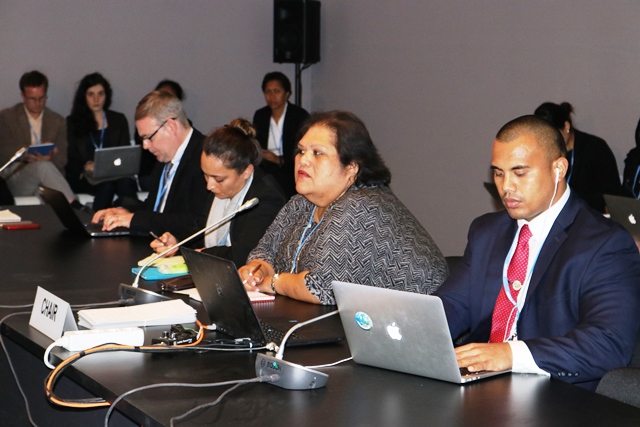 H.E Ambassador Marlene Moses, the Nauru Permanent Representative of Nauru to the United Nations with delegates from Nauru, chairing the Pacific coordination group at the UNFCCC COP22. Photo: SPREP

In the 2015 May UN climate talks, just under 50% of all Pacific island delegates consisted of women. The Cook Islands delegation is often made up of 90% women with a woman often leading as Head of Delegation and it is here at the twenty-second Conference of the Parties to the United Nations Framework Convention on Climate Change (UNFCCC COP22) in Marrakech, Morocco, that the majority of the Tuvalu delegation are women.

"We've had strong participation of women in our delegation for a long time, holding leading roles at the negotiations such as the Head of the Least Developed Countries Expert Group (LEG), and now Co-Chair of the Warsaw International Mechanism on Loss and Damage, so we've always had that strong participation and we select people on their merits and, as it happens, we have more women in engaged in this issue at the moment," said Mr Ian Fry of the Tuvalu Delegation.

"We've obviously tried to build capacity of new staff coming through the process and we have seen quite dramatic changes in how people have been able to develop and engage actively in the process." 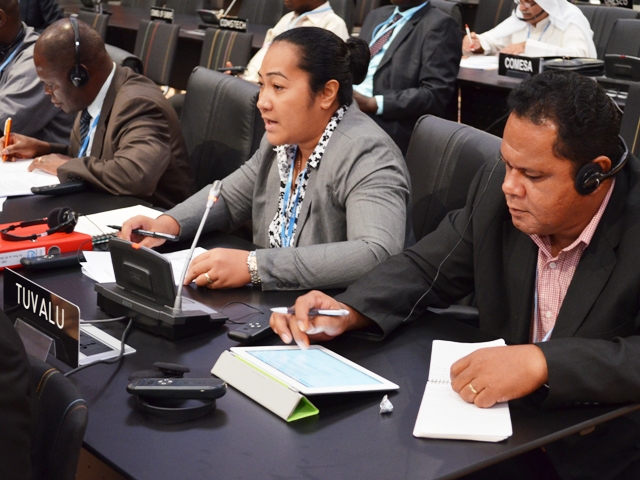 Ms. Pepetua Latasi, presenting on behalf of the LEG at the UN Climate Change negotiations in Doha, 2012

Ms Pepetua Latasi of the Tuvalu delegation is the Head of the Least Developed Countries Expert Group, and the Co-Chair of the Executive Committee of the Warsaw International Mechanism on Loss and Damage; the Climate Change Ambassador of Palau is H.E Olai Uludong who was formerly the Chief Negotiator for the Alliance of Small Island States; Ms Anne Rasmussen, of the Samoa delegation often co-facilitates a contact group at the UN Climate Conferences and; a lead author of Chapter 29 on Small Islands, Working Group 2 in the 5th Assessment Report of the Intergovernmental Panel on Climate Change is Dr Netatua Pelesikoti a woman from Tonga, also the Director of the Climate Change Division of SPREP.

"I think the Pacific islands are different from others in this respect, the delegations are very much close to equal in terms of gender participation and it's very clear that the roles of Pacific island women are not only of the support level," said Ms Diane McFadzien, of the Secretariat of the Pacific Regional Environment Programme (SPREP).

McFadzien has been attending the UN Climate Conferences for over 15 years, having also won an international IUCN Award for Women working in Climate Change.

"We have many Pacific island women in leading roles, stepping up on the international field representing their home islands and our region. Many of whom are excellent role models for others wanting to enter in this field."

Here in Marrakech, Morocco at the UNFCCC COP22, the Women's Delegate Fund have just completed their Night School which has been taught by Ms Linda Siegele for the past four years. The event which spans two evenings consists of being taught about the UN Climate talks and their processes, followed by a second evening of negotiation simulations.

"Coming to and participating in an international climate change meeting for the first time can be a daunting process so at the Night School we provide some insight into what is going to happen, how it works, what to expect and then we have a night of negotiation simulations helping the delegates to understand negotiating text, write interventions, make oral statements and negotiate," said Ms Siegele of the Cook Islands delegation.

"Having taught this for the past four years, it has been personally touching to receive good feedback and also to see the women delegates as they continue through this process, I have since seen them take the floor and make statements, among other things, which has been great to witness."

According to the WDF, it has supported 218 trips for 54 women across 40 countries to attend 25 sessions of the UNFCCC since 2009. During these sessions, 10 Night Schools have now been held and over 270 women have been trained in technical language and negotiation skills. 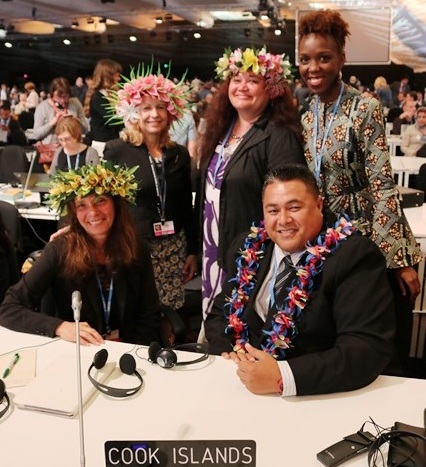 Members of the Cook Islands delegation with Ms Ruehanna Haynes of Trinidad and Tobago on far right of the top row. Ms. Linda Siegele on left of top row next to Ms. Melina Tuiravakai in the top middle

Women delegates from Papua New Guinea and the Cook Islands took part in the Night School with over 20 participants on the evenings of 4 and 5 November, on the cusp of the UNFCCC COP22.

"I was very pleased to be part of this Night School," said Ms Melina Tuiravakai of the Cook Islands delegation.

"This is my first time attending the UN Climate COP and this was a real eye opener, helping to prepare me for what may come next week. It has also helped me bond and spend time with other women delegates who are also new to this process, enabling us to support each other as the negotiations unfold in the next two weeks."

The WDF works to enhance women's participation in the climate negotiations in three key ways: 1) Travel Support; 2) Capacity Building and Networking, and 3) Outreach and Advocacy. For more information on this please visit: http://wedo.org/what-we-do/our-programs/women-delegates-fund/ - #4PacIslands