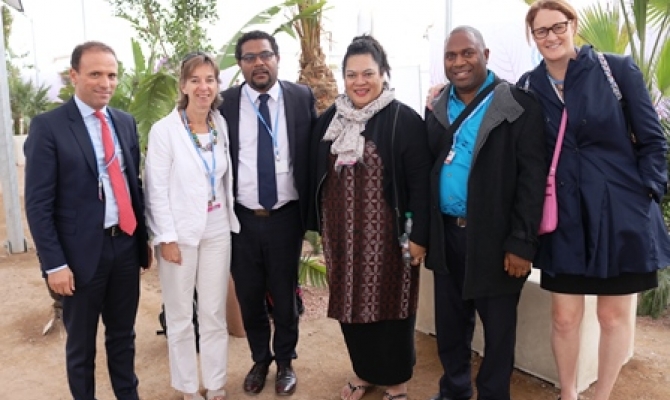 Climate Change Resilience
11 November, 2016, UNFCCC COP22, Marrakech, Morocco - The call has come for more Pacific island authors and contributors to be part of the science reports released by the Intergovernmental panel on Climate Change.

A special IPCC report on the Impacts of global warming of 1.5°C above pre-industrial levels and related global greenhouse gas emission pathways is to be released in 2018.

Two other special reports are also to be released in 2019, one on Climate Change, Oceans and the Cryosphere as well as a special report on Climate change, desertification, land degradation, sustainable land management, food security and greenhouse gas fluxes in terrestrial ecosystems.

"We want the author team to be truly representative: I urge delegates to encourage their governments to nominate experts from all relevant disciplines for this assessment, which will be so important for the work of this Convention and related instruments," said the Chair of the IPCC, Hoesung Lee at the Twenty-second Conference of the Parties to the United Nations Framework Convention on Climate Change in Marrakech, Morocco.

"It is our ambition to enhance the involvement of scientists from developing countries in our work."

The IPCC is the globally recognised, leading international body when it comes to climate change science. Established in 1988, the IPCC have published a range of scientific climate change reports to help policymakers in their decision making, it is now preparing for its sixth cycle of reports to be finalised in 2022.

The IPCC does not conduct its own research, however it assesses scientific papers as part of developing their reports. All of the science considered must have been published in peer-review scientific journals. Other relevant documents such as official government reports including Needs Assessments may be also considered as well as Traditional knowledge which may be relevant, even if not published in peer-review publications.

Nominations are now open for authors for the 1.5 Special Report, they must be submitted through their IPCC national focal points before 11 December this year. 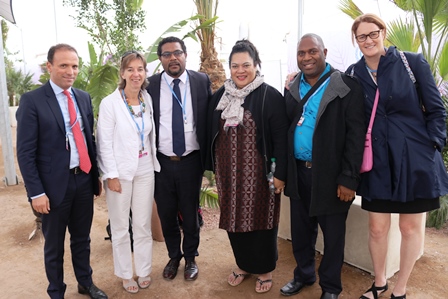 Dr Netatua Pelesikoti, the Director of the Climate Change Division at the Secretariat of the Pacific Regional Environment Programme (SPREP) is the very first Pacific island female lead author of an IPCC Report. Her focus was Chapter 29 on Small Islands in the Working Group Two report of the IPCC 5th Assessment Report series.

"It is a lot of hard work, long hours that require much dedication and a love for knowledge. It is not everyone's cup of tea but if you are interested, know your stuff, write well and have a neck for research than I encourage you to submit through your IPCC focal point, your nomination to become an author," said Dr Pelesikoti.

"As a Pacific island woman that has experienced, along with family and friends, the impacts of climate change and knowing that the reports provide the scientific, social and economic evidence of climate change impacts which help bring about better decisions for all of us - the hard work, the hours of reading, reviewing and writing, is worth it."

Come end of January next year, the selection of authors for the Special 1.5 IPCC Report will have been made, with the final Government review of the Summary for policymakers to be completed by the end of July in 2018 and the report itself accepted, adopted and approved by the end of September, 2018.

The call for more Pacific island authors is also echoed by Pacific islanders who would like to see more Pacific national capacity contributing to the IPCC reports, which guide decisions both at the national, regional and international levels.

"I think it will be very good to have more authors, especially people that have been working in, and have the knowledge from specific areas related to climate change.  It will also be good to have more input into the reports from studies that have not been peer reviewed or even be given the support to have these reports published to allow the IPCC authors to use these resources," said Ms. Pepetua Latasi of the Tuvalu delegation at the UNFCCC COP22.

The Sixth Assessment Report of the IPCC is still at the scoping stage to help develop the draft outline of the Report. 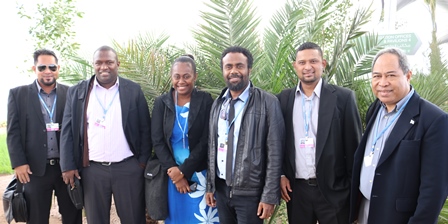 Members of the Vanuatu and FSM Delegation, with Mr Yatilman on far right

"I think we need to encourage our local scientists to participate in these assessments.  Our very own people have collected much data.  I hope they are also involved in the analysing of this and contribute more to these scientific reports," said Mr Andrew Yatilman of the delegation from the Federated States of Micronesia.

The Intergovernmental Panel on Climate Change was established by the World Meteorological Organization and the United Nations Environment Programme, endorsed by the United Nations General Assembly. As an organisation, it was awarded the Nobel Peace Prize in 2007 for its work on climate change with the former US Vice-President Al Gore.

For more information of how you can be involved with the coming IPCC reports, please contact your IPCC national focal point or visit http://www.ipcc.ch/index.htm - #4PacIslands