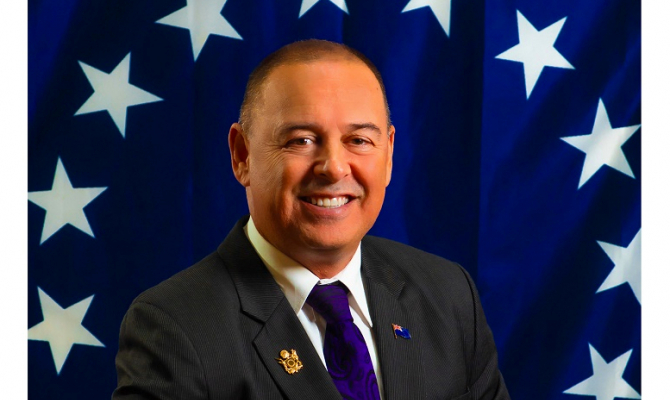 The Pacific’s collective voice, calling on world leaders to urgently implement the Paris Agreement, will have new-found mana at the UNFCCC COP26 in Glasgow, with the announcement of five Political Climate Change Champions.

The champions, who will advocate for Pacific priorities and influence decision-making in calling for urgent climate action now, were announced during a High Level virtual launch event.

They are Cook Islands Prime Minister, Hon. Mark Brown; Fiji’s Deputy Prime Minister and Minister of Economy and Climate Change, Hon. Aiyaz Sayed-Khaiyum; Palau’s Minister of Agriculture, Fisheries and Environment Hon. Steven Victor; Tuvalu’s Minister of Finance and Climate Change, Hon. Seve Paeniu; and the Republic of the Marshall Islands Minister of Finance, Alfred Alfred Jnr.  Each champion will advocate for one of five priorities identified by the Pacific, which include Climate Finance, Climate Ambition, Environmental Integrity, Loss and Damage, and Oceans.

“This COP is the final opportunity to keep this 1.5 Degrees Celusius threshold within reach and avoid a tipping point of no return,” Secretary General of the Pacific Islands Forum Secretariat, Mr Henry Puna said. “At the current warming level of 1.2 Degrees Celsius, our seas are rising, our oceans are warming, and extreme events are more frequent and severe. On this current trajectory, we are on track for a climate catastrophe, our very future therefore is at stake.”

In assuring the champions of the region’s support, Mr Puna said Pacific leaders have endorsed their roles and they will be well supported. “Climate change is a matter of survival for us. Everyday of inaction brings us one step closer to a perilous future, which will see many of our homes disappear.”

The Director General of SPREP, Mr Kosi Latu, reemphasised the recent IPCC report, which highlighted the urgency of immediately reducing emission in order to keep the Paris goal of 1.5C within reach.

“It is critical that the Pacific voice and requirements are embedded in the Paris Rulebook as our very existence is dependent on an effective system which pushes for the highest possible climate ambition,” Mr Latu said. “Therefore, our participation at COP26 is vital to ensure the very rules that will determine our future fully address our needs and suit our national circumstances.”

The Director General added that valuable time has been lost due to the COVID-19 pandemic and there is no time to waste, reiterating the call for urgent climate change action now.

The launch also featured a poet of Tongan and Pākehā descent with ancestral connections to Samoa, Dr Karlo Mila, who recited a poem called “The Commonwealth.”

“Some days it doesn’t feel like we’ve inherited riches or common wealth, rather common problems,” she said.

“Although we gather to speak of fairer futures, truth be told, it is fear of the future that we most have in common. I did not come to sing a siren song on a sinking ship of empire, I come to sing of sinking islands in the south Pacific on the blue continent where I come from, where what is at stake is the very land we stand on.”

The champion for Climate Finance and Cook Islands Prime Minister, Hon. Brown congratulated Dr Mila for such a fitting poem, summing up the Pacific’s fight for survival.

“COVID-19 is not an excuse for developed countries or parties to delay the provision of scaled up finance for developing countries as required under the Articles 9.1 and 9.3 of the Paris Agreement. There is no excuse for them not to be able to contribute,” said Prime Minister Brown.

The Champion on Ocean-Climate Nexus and Climate Finance, Hon. Sayed-Khaiyum called for a stronger push for the blue component of Nationally Determined Contributions, to be promoted and tracked.

“In respect of oceans, we need to generate a lot of support for oceans related programmes,” he said. “We in the Pacific are obviously in the coalface of climate change therefore there should be more emphasis on adaption.”

The point was well supported by the Champion for Loss and Damage, Hon Seve Paeniu, who said: “Given the present levels of global warming, and even if we as a global community is able to bring us to 1.5Degrees Celsius trajectory, our adaptation costs will still be very enormous. The key issues for Pacific Islands not only revolve around raising climate ambition, but the need to have sufficiently large climate finance to assist us prepare for and deal with loss and damage.”

The Champion for Environmental Integrity, Hon Victor, reminded
that climate change is very real and cannot be ignored.

“As we speak, there is a storm brewing to the east of us, which is a bit early for storms, so we are actually experiencing climate change as we speak,” he said.

He welcomed his new role, noting: “We head to Glasgow with optimism however this means we must ensure the voices of our people are not left behind in one of the most difficult aspects of the negotiations.

“Article 6 of the Paris Agreement is still unresolved, it is the article responsible for the breakdown of talks in Madrid. As the champion of environmental integrity it is my responsibility to work with fellow Pacific leaders, Ministers and heads of delegations to support our delegations and technical negotiators, and with the support of One Crop Plus on matters relating to Article 6.”

The Champion for Climate Ambition, Hon Alfred Jnr, was unable to address the high-level event however was represented by the Climate Change Envoy for the Republic of the Marshall Islands Her Excellency Tina Stege.

“We need to stand with our youth and reflect back to them the strength and the resilience and the absolute power that they bring to what we do in our advocacy,” said H.E Stege.  “The message from the youth is that they are tired of hearing words, words just won’t cut it.  What we need now in this decade is action.  I hope that we can all bring youth along with us as we go into this fight.”

“The seriousness of implications of climate change in the Pacific have been well articulated today and as have also some of the required and possible solutions, your willingness to champion some of these issues for the region is testament to your conviction for ensuring a better outcome for tomorrow,” said Dr Minchin in his summary.

He was followed by Dr Tupou-Roosen who closed the event.

“Our High-Level Champions are an integral component of our approach to COP26 to ensure our key climate messages are amplified on the world stage.  With COP26 being our final opportunity to keep 1.5 Degrees Celsius alive, your dedication and willingness to raise the Pacific collective voice through advocacy influencing and demanding hard decisions is of vital importance to our Blue Pacific region.”

The Twenty-Sixth Conference of the Parties to the UN Framework Convention on Climate Change (UNFCCC COP26) will take place in Glasgow, Scotland from 1 – 12 November 2021.  The High-Level Launch Event: Magnifying our Pacific Voice at COP26 through Political Climate Champions was held virtually on 5 October, 2021.  To view the recording of the event please contact [email protected]

The High-Level Political Climate Champions and the issues they will be following are: