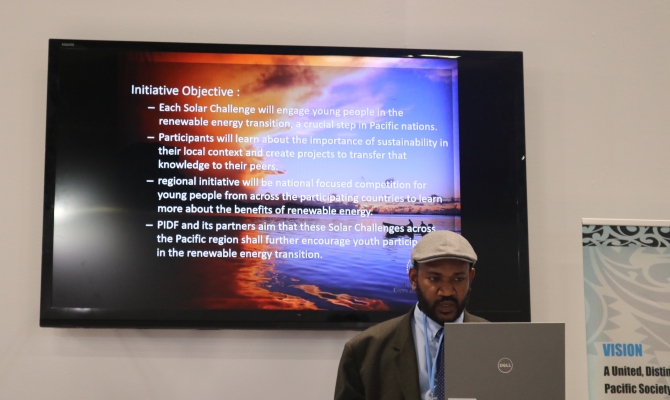 3 December 2019, Madrid, Spain – A challenge to engage young people in the Pacific in the transition to Renewable Energy was launched at the Moana Blue Pacific Pavilion at the 25th Conference of the Parties to the United Nations Framework Convention on Climate Change (UNFCCC COP25).

The Pacific Solar Challenge, spearheaded by the Pacific Islands Development Forum (PIDF) in partnership with Solar Head of State (SHOS), is a regional initiative which will host nationally focused competitions for youths in participating countries to learn more the benefits of renewable energy.

Participating youths will be tasked with the designing of a project that showcases the benefits of solar energy, using mediums such as videos, songs, posters and essays.

“This is an awesome opportunity and we encourage our Pacific youth to take part in the challenge as they are our future.  The more they know about renewable energy and are a part of this transition in our region, the more resilient youth futures will be.,” said Ms Tagaloa Cooper, Director of Climate Change Resilience of the Secretariat of the Pacific Regional Environment Programme (SPREP).

The challenge was initially carried out in the Caribbean by SHOS, and the winning project from Jamaica, a music video on the potential benefits of solar-power to citizens of Jamaica, was showcased at the side event launch of the Pacific chapter.

Mr Viliame Kasanawaqa, Team Leader Policy Research and Evaluation of PIDF said, “This project will be used as a media campaign and community outreach tool, to ensure that participants and youths in participating countries will learn about the importance of sustainability in their local context.”

“The projects they create can then be used to transfer that knowledge to their peers and therefore generate more engagement from the youth on the renewable energy transition,” he added.

The PIDF will, in collaboration with international, regional and local partners, engage national government to solicit their participation in promoting the solar challenge. By engaging these sectors along with the youth, the project aims to facilitate connections between these sectors to further promote renewable energy and provide opportunities for growth.

The challenge will be open to youth from 18 to 36 years old. The initial 12 participating countries are Members of the PIDF, Federated States of Micronesia, Fiji, Kiribati, Nauru, Palau,Republic of Marshall Islands, Solomon Islands, Timor Leste, Tokelau, Tonga, Tuvalu and Vanuatu.

Mr Kasanawaqa, in response to a question from Ms. Vanda Faasoa-Chan Ting, ACEO of Renewable Energy from the Ministry of Natural Resources and Environment of Samoa, also said that they are exploring the possibility of taking the challenge to other Pacific island countries which are not Members of PIDF.

The timelines for the Challenge will be communicated to the national focal points in each of the participating countries starting December 2019.

The challenge was launched at the PIDF Pacific Solar Challenge side event held at the Moana Blue Pacific Pavilion, a Pacific partnership with New Zealand and Fiji, on Tuesday, 3 December 2019. The UNFCCC COP25 is held in Madrid, Spain from 2 to 13 December, 2019.