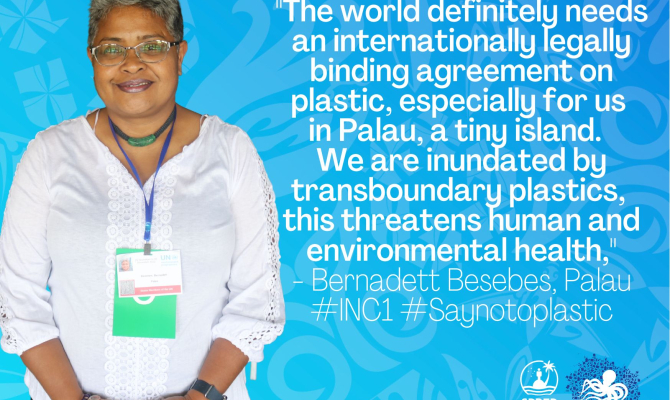 26 November, Punta del Este - Over 190 countries have been tasked with creating a new internationally legally binding agreement on plastic pollution including in the marine environment.  The challenge being this must be developed within a two-year period across five different sessions of the International Negotiations Committee.

The historic resolution at the UN Environment Assembly endorsed to end plastic pollution in March this year, is now entering its first International Negotiating Committee to start the multi-lateral process of developing a new legally binding agreement.

For the Pacific Islands, this new agreement will help address the plastic pollution crisis that has a huge impact upon its ocean.  The Pacific Islands are large ocean, small island developing states. The ocean makes up 98% of the island region, only 2% is land. Our Exclusive Economic Zone’s comprise over 10% of the world’s ocean providing vital ecosystem services valued in many billions of dollars and underpinning economic sustainability in the region.

Plastic is everywhere with the amount of marine litter and plastic pollution continuing to grow rapidly.  The amount of plastics estimated to be in the oceans is around 75 – 199 million tons.  Plastic accounts for at least 85 per cent of the total marine waste with the equivalent of one rubbish truck of plastic waste being dumped into our ocean each minute.  Approximately 7 of the 9.2 billion tonnes of plastic that was produced from 1950 to 2017, became plastic waste ending up in landfills or dumped.

Weighing the problem against the solutions, the urgency for an internationally legally binding agreement is clear.

“We in Palau are inundated by transboundary plastics which threaten both human and environmental health.  As a small island nation, we depend upon tourism as a source of revenue, and the plastic in our waters are destroying our environment, destroying the very foundation upon which our tourism industry is based – a pristine paradise Palau,” said Ms Bernadett Besebes of Palau.

Ms Besebes is attending the INC1 with fellow delegates from the Pacific Islands.

“Plastic pollution is destroying our food security because we depend on fish so now, we have to worry about microplastics, another aspect of the plastic pollution crisis.  The world needs this kind of internationally legally binding framework right now, the world needs to come together in partnership to find a win-win situation for us all,” said Ms Besebes.

This will see the INC1 lens focused on paragraphs three and four of the Resolution 5.14 that was endorsed at the United Nations Environment Assembly 5.2 in Nairobi in March this year calling for the legally binding agreement to be formed.  It has been proposed that the INC1 finalise the sequencing and clustering of work, the structure of the instrument, the scope, objectives and options for potential elements, standard articles on final provisions, potential elements related to capacity-building, technical assistance and finance including all financial flows and financing sources to address the full life cycle of plastics, as well as stakeholder participation and action.

“We understand that for any global, legally binding treaty, to be successful it must be done right.  We are looking forward to bringing forward our Cook Islands and Pacific Islands perspectives into the architecture of the new agreement on plastic pollution,” said Mr Halatoa Fua, Director of Cook Islands National Environment Service.  The Cook Islands are supported by a delegation of four at the INC1.

“We are hopeful that all 193 Members will work together on the same page, to build a strong foundation for our new global agreement that is going to make a positive difference upon the lives of many as we move forward.  We anticipate many long days and nights ahead as we develop this first solid piece of content upon which everything else in the agreement will be built around.”

There is much at stake for the Pacific Islands to ensure a legally binding agreement is formed within the set period.  As it stands, the Pacific region contribute as little as 1.3% of global plastic pollution, do not produce plastic polymers, and yet the Pacific region is grossly and disproportionately affected by its impacts. The Second World Ocean Assessment states that the highest recorded quantity of floating plastics are in the South Pacific subtropical gyre.

“What the science is telling us is scary.  We don’t want to suffer because of plastic, the problems and impacts are so far wide-reaching from hurting our health as humans, our environment and biodiversity which sustains our livelihoods, to our waste challenges,” said Ms Vivian Koroivulaono of the Republic of the Marshall Islands, now at the INC1 in Uruguay.

“We need to leave this INC1 with substantial progress underway, a strong foundation with periodic assessments so we know this is a successful convention.  The stronger the foundation is, the better it is for our Pacific Islands region that are the most impacted by the plastic pollution.”

The Pacific Islands are represented by Cook Islands, Federated States of Micronesia, Fiji, Kiribati, Niue, Palau, Papua New Guinea, Republic of the Marshall Islands, Samoa, Solomon Islands, Tuvalu and Vanuatu through the support of the Government of Australia and the United Nations. The Secretariat of the Pacific Regional Environment Programme and the Office of the Pacific Ocean Commissioner are also attending.