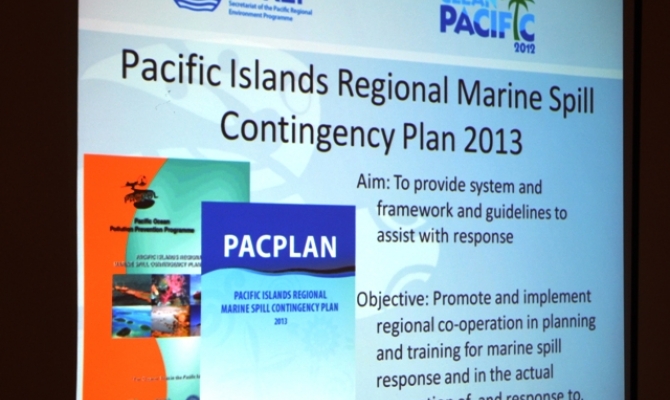 General News
19 September 2013, Apia Samoa, 24SM - The PACPLAN is one regional document that would suit the Pacific to sit on shelves, never to be implemented.

It's the Pacific Islands Marine Spill Contingency Plan aka PACPLAN and it acts as the guide for countries to put in action when there is an oil, hazardous or noxious substance spill requiring urgent reaction.  It outlines the cooperation between countries to respond as well as explaining preparation needed at the national level to prepare countries to act efficiently in case of emergency. 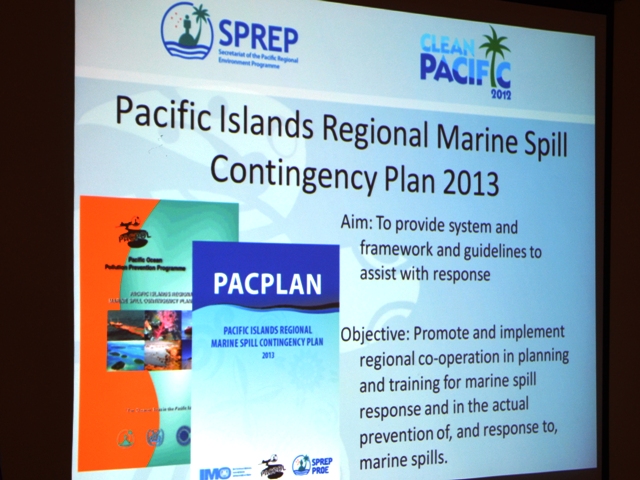 There are three tiers of oil spills.  Tier one is localised to a facility such as an oil terminal where the terminal can respond to the small spill, tier two refers to an oil spill that island countries are equipped to address themselves and tier three is a major spill putting the PACPLAN into action.

This regional plan of action in times of marine oil spills was endorsed at the 24th Annual Meeting of the Pacific Regional Environment Programme.

"I think the real test of this will be when the rubber hits the road.  It will be when we see the implementation of the PACPLAN in terms of the countries strengthening their national capabilities to enable support to be efficiently provided," said Anthony Talouli, SPREP's Pollution Adviser.

There are times when the PACPLAN will be used when there isnt an actual oil spill and that's to help guide the Pacific island countries and territories on what needs to be done to be prepared.

"These are events such as setting up national legislation, defining who is responsible and the different roles as well as setting up the relationships between the different agencies such as the Ministry of Foreign Affairs, Customs and Quarantine so there is no delay in the chain of services provided should there be an emergency."

The PACPLAN was originally formed 12 years ago, it was revised after a decade with plans to revisit it every five years from now on.  Over the past eight years the PACPLAN has been used to address marine oil spills in the Federated States of Micronesia and Samoa, highlighting the urgent need of the PACPLAN. 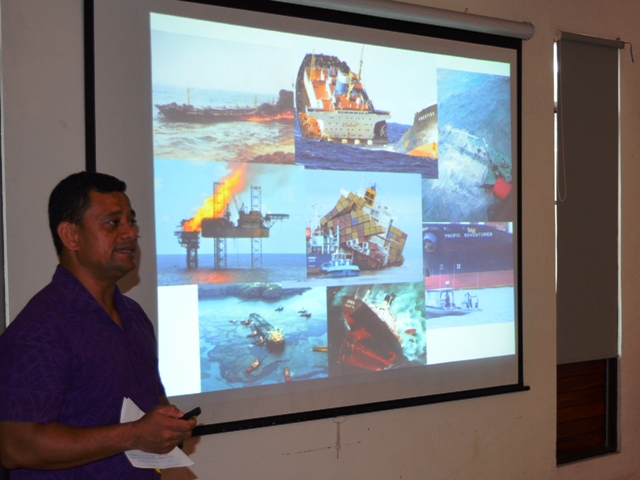 "The incident in Samoa had the potential to be a tier three spill," said Talouli.

"It is the practise to escalate an oil spill responses to the worst case scenario i.e. tier three.  It's better to be prepared and then downgrade response as opposed to being unprepared and reacting by upgrading your response which can cause delay.  Oil spills require urgent, emergency action to be efficient."

Partnerships and support from countries such as Australia, France, New Zealand and the United States to provide support needed play a crucial role in helping make the plan a success when it's kicked into action.

"I think it is important that we have this as we are very much dependent on the shipping industry.  The key thing here is the PACPLAN gives us a process to use and get assistance if we have any major spill as it links us with other countries.  It is important, we need this," said Dr Melchior Mataki, the Permanent Secretary of the Solomon Islands Ministry for Environment, Climate Change, Disaster Management and Meteorology.

The recent review of the PACPLAN involved a six month consultation with SPREP members, made possible through the assistance of the International Maritime Organization and the Governments of Australia, France, New Zealand and the United States.

The PACPLAN was featured during a side event at the 24th Annual Meeting of the Pacific Regional Environment Programme in Apia Samoa.  The Meeting is held from 17 to 19 September, chaired by the Government of Nauru and brings together 24 of the 26 members of SPREP, including the newest member, the Government of the United Kingdom.