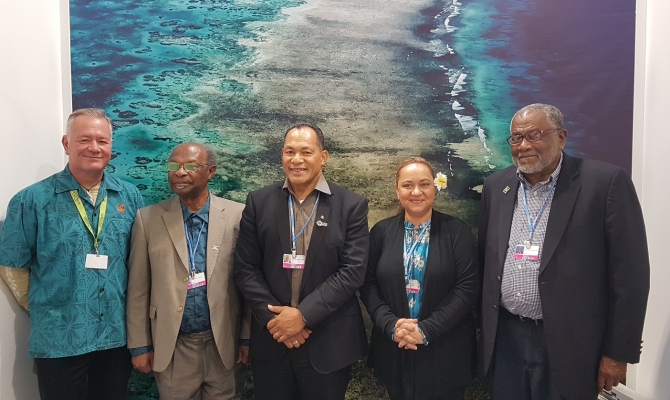 11 December, 2019, Madrid, Spain – Stronger collaboration for capacity building activities for both the Pacific and Caribbean communities will now be ensured with the signing of an Memorandum of Understanding (MOU) extension between the Secretariat of the Pacific Regional Environment Programme (SPREP) and the Caribbean Community Climate Change Centre (CCCCC) today at the Moana Blue Pacific Pavilion in Madrid, Spain.

The initial MOU was signed in June 2012 between the Parties in Rio de Janeiro, Brazil. The extension of the MOU signed today seeks greater strengthening of collaboration between both Parties.

Today in Madrid, the MOU was signed by Mr Kosi Latu, Director General of SPREP, and Dr Kenrick Leslie, Executive Director of CCCCC. It was witnessed by Dr Neville Trotz the Science Advisor of the CCCCC and Ms Heather Dawn, along with SPREP’s Director of Climate Change Resilience Programme, Ms Tagaloa Cooper and Mr Espen Ronneberg, SPREP Climate Change Adviser.

“I want to thank SPREP for our continued collaboration. It is something we have been advocating for, for a long time and taking the step of signing a formal MOU is to say that we are committed and look forward to a stronger partnership for years to come,” said Dr Leslie. 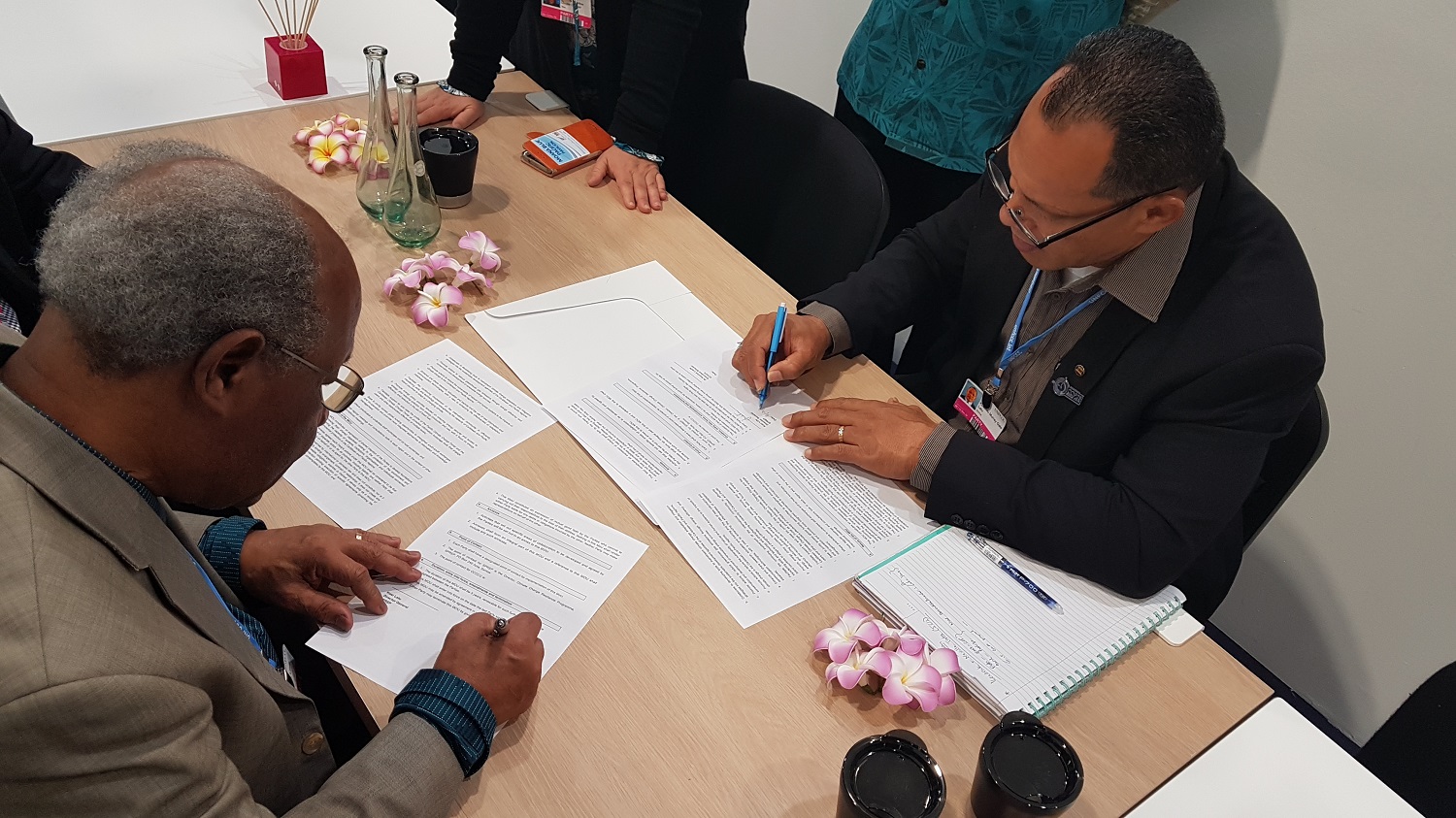 The organisations discussed possible areas of focus for regional collaboration, reflecting the priorities of small island developing states in climate change, including skills development and training and sharing of knowledge and expertise across both the Pacific and Caribbean regions as well.

Both Parties are accredited entities of the Green Climate Fund (GCF) and have faced similar challenges in climate change finance. A possible joint inter-regional proposal to the GCF was also discussed during today’s event.

Mr Latu stated that the MOU was an important renewal of the partnership between CCCCC and SPREP, and one that would benefit both the Pacific and Caribbean regions as it would ensure sharing of knowledge, expertise and lessons learned between the two climate change organisations that each play a critical role in supporting resilience in the communities they serve.

“The signing of the new MOU with CCCCC, an important counterpart for SPREP in the Caribbean, ensures the arrangement we have had for the last five years will not only continue for the next five years and will also be strengthened further with the particular objectives we have set for partnership,” said Mr Latu.

“SPREP and CCCCC are very similar in the work we do and the support we provide for our respective regions, and it is wonderful to be able work with them and their excellent team.”

The CCCCC’s made an official visit to SPREP in 2014, and in 2020 a reciprocated visit of SPREP to headquarters of the CCCCC is planned to allow for further progression of the Parties’ collaboration.

SPREP is the Pacific region’s premiere inter-governmental organisation for environment and sustainable development established in 1993.

The signing of the MOU took place on the tenth day of the Twenty-fifth Conference of the United Nation’s Framework Convention on Climate Change (UNFCCC COP25), at the Moana Blue Pacific Pavilion. COP25 is hosted in Madrid, Spain from 2 to 13 December, 2019.