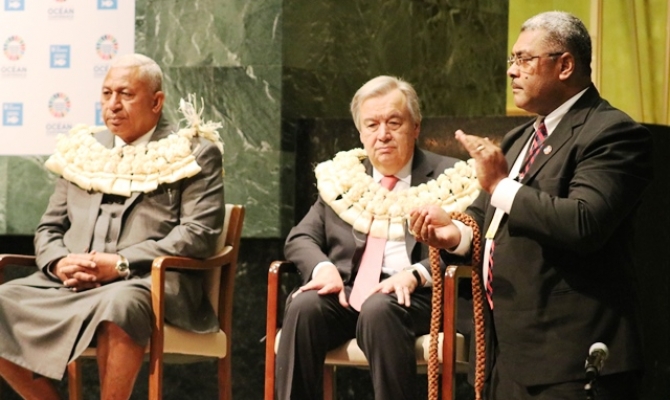 5 June 2017, UN Ocean Conference, New York - The world's oceans will continue to deteriorate if members of the United Nations continue to let territorial and resource interests to block conservation measures.

"The Swedes were sailing around the Baltic Sea and as far as present-day Istanbul some 1,300 years ago. Fijians were sailing canoes at record speeds and for record distances around the Pacific, well before that. A Japanese creation myth tells of how the archipelago was formed from sea water. An Inuit creation myth is centred on Sedna, the Goddess of the Sea. The sea indeed, belongs to all of us. Improving the health of our oceans is a test for multilateralism, and we cannot afford to fail." 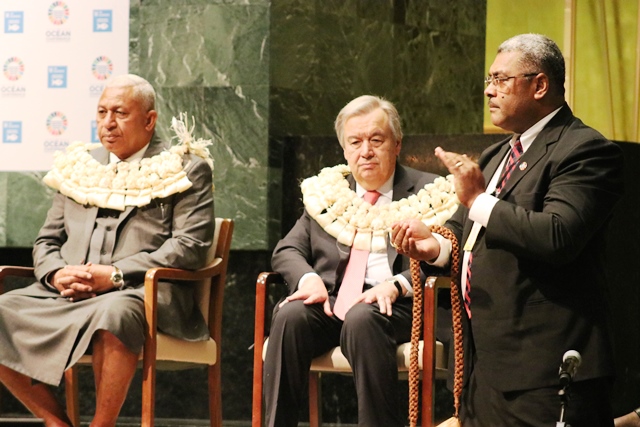 SG Guterres said planet Earth could have been renamed Planet Water since the oceans and seas cover two-thirds of our home. But he said since we created problems that now threaten our oceans, it befalls on us to solve them with decisive and coordinated global action. To this end, SG Gutrres said Sustainable Development Goal (SDG) 14 must be our roadmap.

"The conservation and sustainable use of marine resources are two sides of the same coin. Second, we need to promote strong political leadership and new partnerships, based on the existing legal framework. I commend all the signatories of the Call for Action that will be formally adopted this week.

"Now we need concrete steps, from expanding marine protected areas, to the management of fisheries; from reducing pollution, to cleaning up plastic waste. I call for a step change, from local and national initiatives to an urgent, coordinated international effort.

"The ongoing work with a view to a legal framework on conservation and the sustainable use of biodiversity in areas beyond national jurisdiction is particularly important to the future of the oceans and their biodiversity. Third, we must translate the political will of the 2030 Agenda, the Paris Agreement on climate change and the Addis Ababa Action Agenda into funding commitments.

"Fourth, we must deepen our knowledge base, with better data, information and analysis. We can't improve what we don't measure. Finally, we must share best practices and experiences. Most solutions are local, but many have broader relevance." – S.Pareti/SPREP