Progress made on Partnership Addressing WWII Shipwrecks in the Pacific 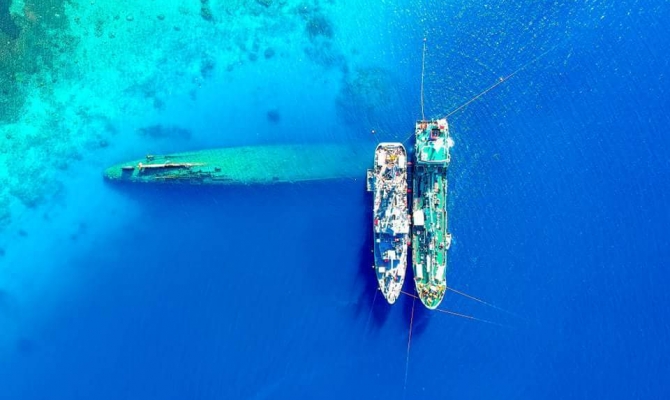 According to Mr. Anthony Talouli, Pollution Advisor with the Secretariat of the Pacific Regional Environment Programme (SPREP), the remains of ships sunk during WWII poses several risks. Principally, these wrecks are home to unexploded ordinance, and to oil and fuel.

Fortunately, SPREP is working with partners in a large-scale remediation project to address the problem. SPREP, the University of Newcastle, and Major Projects Foundation (MPF), are planning a wide-ranging project to assess the dangers posed by more than 50 WWII era wrecks, and then to plan on dealing with those dangers.

The wrecks, 53 to be specific, are in the economic zones of Federated States of Micronesia, Palau, Papua New Guinea, Republic of the Marshall Islands and Solomon Islands.

Mr. Talouli said this would involve travelling to the site of a wreck, and inspecting the site with remote submersibles, or with divers.

After 80 years at the ocean bottom, the ships are vulnerable because of rust and decay to the ship’s structure. This means that fuel may leak and potentially pose a risk to local island nations. For example, in 2001 the wreck of the U.S.S. Mississinewa leaked a large volume of fuel oil in Ulithi Lagoon in Federated States of Micronesia.

The wrecks have become more precarious in almost two decades since they came to rest at the bottome of the ocean. Previous scientific studies suggest there is a limited amount of time left before the wrecks, which have compromised structural integrity and are critically weak, begin collapsing and in some cases, leaking oil.

“That is why the issue of the ships needs to be addressed soon,” said Mr. Talouli.

Making a survey of remaining unexploded ordinance will have to occur, for safety reasons, before work on the wrecks begins.

While the wrecks will not be salvaged, the work does involve sensitive issues of sovereignty. Under international law, the remains of wrecked ship belong to the last owner before sinking. For most of the wrecks of concern, these belong to the United States and the Government of Japan.

Also, most of the wrecks are also gravesites. Dealing with them will require cultural and technical sensitivity.

A final complication is that the dangerous wrecks are in the economic zones of Pacific Island nations. The danger the wrecks pose to the economic interest of the people of Oceania is motivating the project. And to their environmental degradation – risking livelihoods and culture.

SPREP, the University of Newcastle, and MPF will begin work on the most at-risk wrecks based on the work they have done to date developing a list of the 53 most critical wrecks.

SPREP, with its international scope and relationships, is working on behalf of five Pacific Island nations who have prioritised this work as a major environmental challenge.

MPF is a marine research and conservation not-for-profit organisation with a focus on deploying engineering solutions to protect ecosystems and cultural heritage in the Pacific. They own a refurbished ex-New Zealand Navy vessel, the MV Ocean Recovery, which the group will use during the programme to explore priority shipwrecks.

The University of Newcastle team, including PhD candidate Awei Banivalu, are exploring the remediation of oil in the wrecks, using microbes to break down the fuel. The University is also working with MPF to explore the technical issues associated with the larger project.

The project will require funding. According to Mr. Talouli all three partners are involved in seeking funding for the effort. A precise estimate of the projects cost will not be available until after the pilot study.

However, Mr. Talouli noted the money invested in the remediation will prevent future damage to economic areas and costly clean-ups. For example, the removal of oil from the U.S.S. Mississinewa cost more than $6M US. The potential clean-up cost and the economic damage of an oil spill to Federated States of Micronesia would have been well in excess of the $6M US.

The combined efforts of the three-way-partnership are providing positive outcomes for this critical problem. It is a mammoth problem that requires a herculean effort. The partnership is seeking further donor support to assist their work already underway in the Pacific.

If you would like to help, or to find out more information please contact Anthony Talouli (insert email) or Dr Sascha Fuller, Pacific Node Coordinator, University of Newcastle [email protected]