Prospects and Challenges for Reconstruction after Tropical Cyclone Harold in Vanuatu 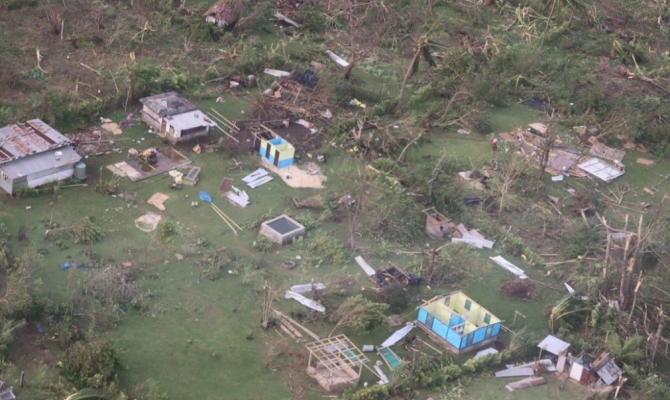 Vanuatu has the highest disaster risk in the world, making it the most vulnerable to natural hazards, according to the WorldRiskReport 2019.

This is due to the Pacific island nation’s geographic location on the tropical cyclone belt of the Pacific and the Ring of Fire, an area in the Pacific Ocean basin prone to earthquakes, volcanic eruptions, and tropical cyclones. Additionally, climate change poses a high risk for the Pacific region with frequent and ferocious extreme weather events.

Earlier this month, a severe Category 5 cyclone, Tropical Cyclone Harold, caused widespread destruction to the outer islands of Vanuatu, resulting in more than 100,000 people having lost their homes.

Last year in November, the Secretariat of the Pacific Regional Environment Programme (SPREP), in collaboration with the University of Newcastle (UoN), Australia, and the Japanese Technical Cooperation Programme for Promotion of Regional Initiative on Solid Waste Management in Pacific Island Countries (J-PRISM II) carried out a training which aimed to improve disaster resilience and effectively manage disaster wastes in Vanuatu.

Dr Iftekhar Ahmed, Associate Professor of Construction Management and Disaster Resilience from the School of Architecture and Built Environment of the University of Newcastle, was one of the trainers for this workshop. The following is an article written by Dr Ahmed that highlights the prospects and challenges faced by Vanuatu in its efforts to rebuild after the devastating impact of Tropical Cyclone Harold.

Natural hazards continue their onslaught while the attention of the media, governments and public is centred on COVID-19. Currently these disasters barely make it to the news, yet recent events such as Tropical Cyclone Harold in Vanuatu on 6th April 2020 exact a heavy toll. Housing has been hardest hit in the cyclone with more than 100,000 people reported to have lost their homes.  What would be the best pathway for reconstruction in Vanuatu? There are informal reports that people have already begun to repair or rebuild their houses, but it is not certain whether cyclone-resilient construction is being followed. It is important at this point to make early decisions in this regard and to assess the technical and other options to build back better and safer.

Aerial photos taken after the cyclone show houses with their corrugated iron (CI) sheet roofs blown off while those few houses with reinforced concrete (RC) roofs survived (Figure 1). The obvious approach would be to rebuild with concrete roofing, but affordability can be an issue and perhaps cultural preference too. There are other constraints to building with concrete in this island nation such as low strength of the typical coral aggregate, corrosion of steel reinforcement in the marine environment and risk during earthquakes. If concrete roofs are not built properly with quality materials and specifications, they can also fail. Nevertheless, whatever the constraints, some people in Vanuatu do build RC roofs and the photo in Figure 1 clearly demonstrates that they survived relatively unscathed in the cyclone, which cannot be said for the CI roofs that flew off. Perhaps the trade-off needs to be explored more carefully and other options need to be looked at.

On the other hand, many houses with thatch roofs made of natangura leaves survived (Figure 2). There are many such houses on the outer islands of Ambae, Maewo and Pentecost that survived the cyclone. Vernacular architecture, as in the thatch houses, have been time-tested and have usually developed in response to the local context, so it is not surprising that they have withstood the cyclone’s impact. They are unfortunately becoming unpopular and in some places such organic materials have become scarce, hence industrial products are replacing them. But often people do not know how to build well with these materials, hence the damage to metal roofing that has not been secured properly to the structure, as well as thicker varieties of sheeting not being used.

Figure 3 shows a house with a curved roof of CI sheet that also escaped relatively undamaged. Curved structures tend to be aerodynamic and often offer good resistance to lateral forces, such as strong wind and earthquakes. Hence the curved metal roofing survived. Would this be widely and culturally accepted in Vanuatu so that it could be an affordable ‘build-back-better’ solution? This is an option that should be explored during the reconstruction process.

There are already many guidelines and manuals on safer roof construction (see for example those listed at the end of this article), and even in Vanuatu such guidelines exist from 1990.  However, implementing them is often a challenge, particularly in the outer islands. Perhaps the focus should be on implementing them during the reconstruction so that a repetition of what happened in TC Harold does not occur, or at least the damage is minimised. Unfortunate as it is, the cyclone has opened up a window of possibility to build back better and safer.

In cyclone-prone areas RC roofing should be encouraged as much as possible, and cheaper options (such as hollow roofing blocks) should be explored. However, it is also important to note that if concrete roofs are not built properly with quality materials and specifications, and good connections with the structural frame and/or wall, they can also fail, though perhaps not to the extent of CI sheet roofs.

Although lightweight coral is used as concrete aggregate in Vanuatu, and can be perceived as inferior, in some other countries, lightweight aggregate is also used in the absence of stone/gravel aggregate, such as brick chips in Bangladesh made from waste bricks; there are also examples in other developing countries of kiln-fired clay pellets as a low-cost aggregate.  There is need for caution though because of the need of fuel for firing, leading to deforestation and air pollution/greenhouse gas emissions. Nonetheless, developing countries often need to make compromises that are not solutions of high technical quality.

Corrosion of reinforcement bars in the marine environment is also an issue to consider, although there are international standards for maintaining a thicker concrete cover (minimum 75mm) in such environments – concrete structures built according to such standards are widespread around the world, but in Vanuatu perhaps it might prove challenging to supervise and implement such standards. Also, concrete structures can pose a risk in earthquakes, but again, if built to a certain standard, such a risk can be minimised; there are earthquake-resistant construction guidelines even for “non-engineered buildings” in developing countries, pioneered by the Indian structural engineer A.S. Arya.

Perhaps even if houses with RC roofing cannot be built more widely because of affordability constraints, some community safe/evacuation refuges can be built of such materials. There are such programs in Asian countries, for example, multi-purpose cyclone shelters in Bangladesh that have brought significant safety for local communities. These are community buildings during normal times, but can swiftly be converted to a safe refuge when a cyclone warning is received.

There are also guidelines for building stronger and safer houses with CI sheet roofing. If at all concrete is not affordable, following these guidelines would help to some extent. There are also guidelines for treating thatching materials with non-toxic preservatives, so that they are more durable and last longer. The list below includes a few relevant manuals, which are indicative, and can be made available upon request; these have already been disseminated to stakeholders in Vanuatu. There is a vast amount of such publications on disaster resilient construction, the challenge is to implement them. Hopefully, the reconstruction in Vanuatu and other affected Pacific countries will utilise this knowledge.

Acknowledgements: This article is based on communications undertaken through the Academic-Practitioner Collaboration for Urban Settlements – South Pacific (APCUS-SP) coordinated by Dr Jennifer Day, University of Melbourne, Australia.