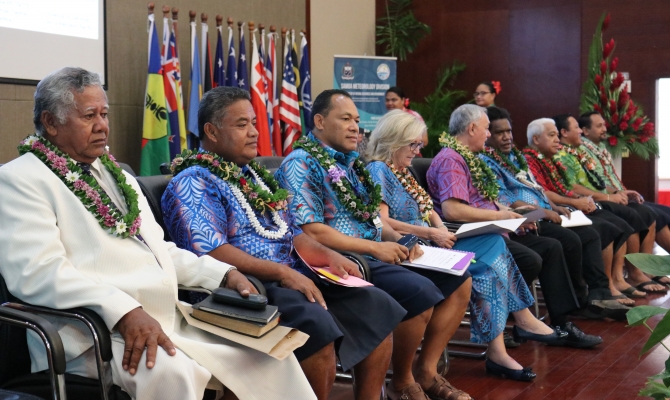 August 9, Apia, Samoa – The role of media in amplifying the messages and services of Pacific National Meteorological Services (NMHSs) was acknowledged today by the Pacific Meteorological Council during its fifth meeting in Apia, Samoa at the TATTE (Tui Atua Tupua Tamasese Efi) Convention Centre.

The involvement of the media at PMC meetings in past years as well as this year, has played a crucial role in building and maintaining strong relations between journalists, reporters, and Pacific Met Services and staff.

Ms Nanette Woonton, Acting Adviser of Communications and Outreach Unit of SPREP highlighted the communications and media work through the SPREP Media Outreach programme was only made possible due to the support of the many partners over the past decade.

This year for the first time SPREP held Mana Classes to build the communication skills for Pacific Met Directors and Pacific women in Met in the areas of radio, social media and an empowered voice.  These Mana Classes reflect the spirit of “Pacific Islanders uplifting Pacific Islanders.”

“We have had many Pacific Islanders undergo our training through our media outreach programme and as such are using Pacific Island trainers who have a strong understanding of our Pacific cultural space.  We are working with those who have we have either invested in to build their capacity – or come well equipped with skills – to work in Pacific island training,” said Ms Woonton.

The trainers of the Mana Classes represent the Pacific Environment Journalists Network (PEJN), Radio New Zealand (RNZ) and Pacific Media Network (PMN), and who were also present during PMC-5 to provide media coverage of the meeting throughout the Pacific region.

“We are truly grateful for the time allocated for us to carry out these Mana Classes in the days prior to PMC-5, and we would like to continue this work to help you build other communications skills, and help bridge the gap between you our Pacific Met Directors and our Climate Change Practitioners, and our Pacific islands media organisations and their CEO’s,” said Ms Woonton.

“While we train journalists and reporters, we note that it is the CEO’s of media organisations that make the decisions. And so our hope is to provide the right platform to bring you all together so you can make better decisions on how to move forward together.”

Ms Woonton also expressed gratitude towards the PMC, Met Directors and officials during the PMC meeting opening for their acknowledgement and welcoming of the media present.

“It gave me a lot of pride to hear during the opening to hear our Met Directors and our key people welcoming the media because it is not often we hear that at big official meetings such as the PMC.  Thank you.”

The PMC-5 meeting was held from 7 to 9 August in Apia, Samoa.