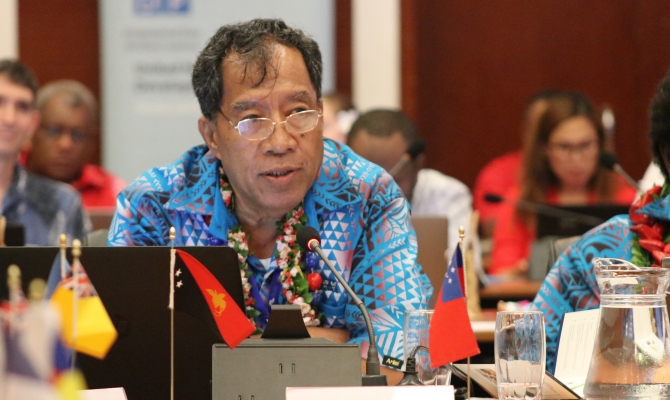 8 August 2019, Apia, Samoa – The Samoa Meteorological Services (SMS) continues to grow from strength to strength, with several recorded achievements since the last meeting of the Pacific Meteorological Council (PMC) held in Honiara, Solomon Islands in 2017.

Mulipola Ausetalia Titimaea, Director of SMS, presented Samoa’s country report on the first day of the 5th meeting of the PMC, being held in Apia, Samoa, which sets out the country’s national priority actions of the Pacific Islands Meteorological Strategy (PIMS) 2017-2026.

“Samoa Meteorological Services has made steady progress in its operations, infrastructure and networks maintenance over the last two years. A major highlight is the Samoa Meteorological Bill which is scheduled to be tabled in Parliament at the end of this year,” Mulipola said.

With regards to the improvement of meteorological services for air navigation, SMS developed a Quality Management System which has enabled them to develop products that have been disseminated to airlines including Air New Zealand, with upgrades continually taking place.

SMS has also increased the use of marine products such as tide-gauges and portals in their work and are also working on developing a Quality Management System in Marine together with Marine counterparts of the Government of Samoa.

Capacity and knowledge building training programmes by the World Meteorological Organizations and the Government of Japan, have greatly improved public weather services and weather operations of SMS.

Collaboration between meteorological and hydrological services has also been strengthened, with SMS collaborating with the Water Resources Division of the Ministry of Natural Resources and Environment of Samoa to develop a Flood Forecasting system, utilising existing real-time rainfall and water level data in flood advisories and warnings.

Climate information and prediction services have also improved over the last two years, through the implementation of the Pacific Roadmap for Strengthened Climate Services, as well as support from the Climate and Oceans Support Programme in the Pacific (COSPPac) and Republic Of Korea-Pacific Islands (ROK-PI) Climate Prediction which has extended the prediction time to six months outlooks for the Pacific, and downscaled to national outlooks.

Mulipola concluded by acknowledging the invaluable support of SMS’ partners, which enables its successful operation.

“With limited resources and in spite of a moderate budget increase, the Samoa Met Service is most grateful to our bilateral donor partners, mainly Australia, Japan and New Zealand, as well as regional bodies such as the Secretariat of the Pacific Regional Environment Programme, Pacific Community and other Pacific regional agencies, as well as United Nations agencies for their continued support.”

The PMC-5 continues today at the TATTE Convention Centre.