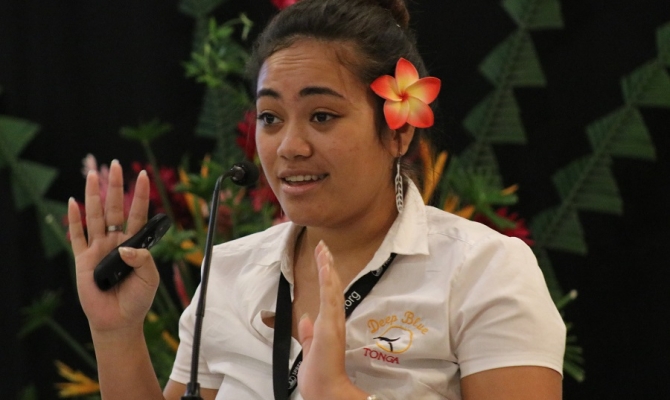 NUKU'ALOFA (MEIDECC): She fought her biggest fear, the sea, and now lives almost three months a year annually out in the open ocean with whales as her friends.

Twenty two (22) year old Lahaina Tatafu grew up and believed she would one day become a lawyer.  In fact she was determined as a young seven year old that she would be a legal bird.  Although her father Sam is a well-known qualified diver, Lahaina never had any inclination towards the sea and what it had to offer.  Sam is also a former naval officer and trains local naval officers and others in diving.  But fate changed and Lahaina is now dubbed Tonga's own 'Moana', having developed to be a master whale tour guide and swimmer.

Her family owns Deep Blue Diving and Cruises, a local business that offers diving, cruises and 'sea-experience' service to tourists and locals alike.  They also operate a resort on 'Eua Island. 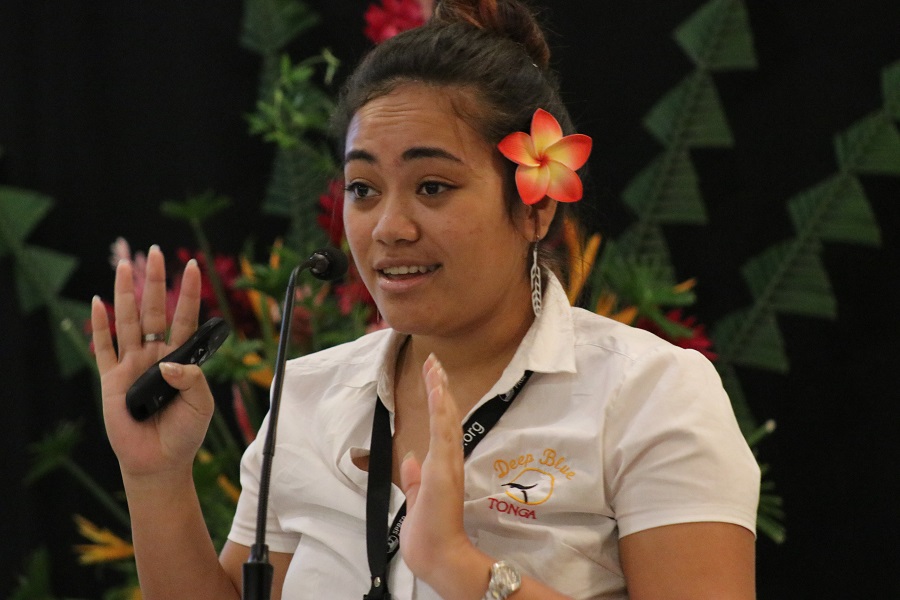 Her StoryPresenting in the earlier part of Day 2 here at the 'Whales In a Changing Ocean' conference at the Tanoa Dateline International Hotel, Lahaina shared her story with delegates and participants.

It was a story that probably could make a movie which would put whale swimming and whale watching businesses here in Tonga on the good end.

"I did not take after my dad as a young girl growing up," she said.  "But God had a different plan for my life."

That plan put her in the very place she feared – the sea.  Things changed when she opted to be a volunteer with her family business and took up the challenge of training to be a tour guide.  Unbeknown to her, that made her father very proud.

"It was a change that I just loved and here she was eager to learn when she got into it," Mr Tatafu said.

With her father in charge of her training, Lahaina quickly learned the trade and the tricks.  She was also opened to learning from her guests on every trip she made.  Quickly losing her fear for the seas, she fell in love with the whales and the job she was doing.

"I decided that I would become the best in the job I am doing and to be the best when swimming with the whales," she told the audience.

Myths and legends
Whales are part of the Pacific history and Lahaina says that is something that is shared to her and her team as part of their training.  She relayed a legend that stated a whale had wanted to change his habitat with the earthworm.
That resulted in the annual event of whales migrating to Tonga in June, when the local yam season begins.
An interesting myth that somehow has some pints of reality in it.

Learning and the future
Volunteers and tourists taught Lahaina too and they became her best teachers along the way.  Now she reckons she is Tonga's 'Moana', having fallen in love with the sea like the actress in the movie many Pacific Islanders have come to love.
Getting back to studies has also given her the urge to work harder and achieve more.  She wants to work and ensure the successful implementation of the family business in becoming the top operator in the Kingdom.

"We aim to build a sustainable product and target to employ the unemployed of Tonga," she said.  "We want to introduce the Triple P's, to PROTECT, PERPETUATE and PRESERVE Tongan Culture and heritage as well as our Whales in a Changing Ocean."

Lahaina is excited and happy to be part of the conference here and stated that making her presentation was a tough call.
But she did that with flying colours, even making her dad prouder of her.

"I forgot to even take photos of her during the presentation because I was so glued and caught up with her presenting," Mr Tatafu said.

Lahaina paid tribute to the late His Majesty King Taufa'ahau Tupou IV and Her Royal Highness Princess Salote Pilolevu Tuita, adding that the work started in 1978 by his late Majesty has seen the growth of the whale watching industry here in the Kingdom.

"They laid the foundation," she added.

Both father and daughter believe the decisions taken at this conference would go a long way to help save whales and ensure that they live as part of our oceans and in harmony with the environment they live in.

And one thing is clear - Lahaina now feels more at home with the whales and the sea more than anything else!