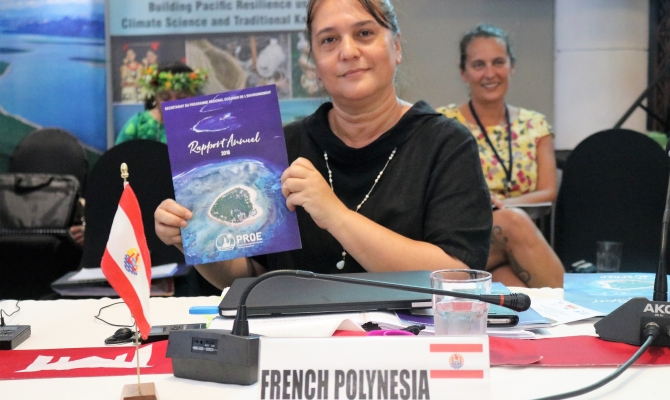 3 September 2019, Apia, Samoa – The Secretariat of the Pacific Regional Environment (SPREP) continues to grow from strength to strength, as was evident when Director General, Mr Kosi Latu, tabled the 2018 Annual Report during the first day of the 29th SPREP Meeting of Officials.

Mr Latu officially presented the 2018 Annual Report and provided an overview of key outcomes and achievements of the Secretariat during the year 2018 to representatives of its 21 Pacific island Members and five metropolitan Members in Apia this morning.

“It has been a busy but successful year for the Secretariat,” he said.

Some of the key highlights for the Secretariat from 2018 included the celebration of the 25th anniversary of the signing of the SPREP Treaty.

“SPREP has been around as an organisation for more than 40 years, but in 2018 we celebrated the 25th year since the signing of the SPREP Treaty, which established SPREP as an autonomous body mandated to protect the Pacific environment.”

The Secretariat carried out a number of celebrations throughout the year in various Member countries to ensure that its Members could also join in on celebrating this milestone.

The celebrations kicked off in Apia, Samoa during the ground-breaking ceremony of the Pacific Climate Change Centre (PCCC), the Centre of Excellence resulting from a partnership between the governments of Samoa and Japan.

Samoa’s Prime Minister, Hon. Tuila’epa Lupesoli’ai Sailele Malielegaoi, delivered the keynote address and cut the anniversary cake in the presence of various dignitaries including JICA, CROP heads, and members of Samoa’s parliament at the SPREP Campus in Vailima.

“There were also various regional meetings which we either organised or participated in during the year, and we used them as an opportunity to celebrate our 25th anniversary with our Members,” Mr Latu added.

The new SPREP organisational structure also came into effect in 2018, to which Mr Latu said that despite resourcing being an issue, will ensure that SPREP can effectively deliver its objectives by best utilising its existing human resources.

“We now have a fully functioning Senior Management Team, having filled all our Director Roles in 2018. I’m proud to say that our SMT is a gender balanced team, with five female Directors and four males.”

2018 also saw the strengthening of partnerships between the Secretariat and its donor partners, such as the signing of the multi-year funding arrangement with Australia valued at AUD 12 million for 2018 – 2020.

New opportunities for partnerships were also realised in 2018, with Ireland, Norway, the Asian Development Bank and the World Bank.

The Secretariat also exhibited strong financial performance in 2018, recording a surplus of USD 346,898, as a result of tighter financial controls and decreased personnel costs. This strong performance continues to boost the confidence of partners in the organisation.

Upon conclusion of Mr Latu’s presentation, SPREP Members expressed their congratulations to the Secretariat for the numerous achievements in 2018 and noted with thanks the 2018 Annual Report.

The 2018 Annual Report can be downloaded here. For the French version, click here.