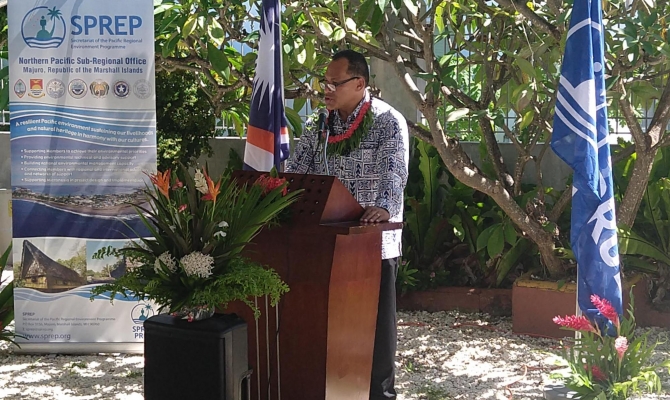 1 Nov 2019, Majuro, Marshall Islands – The Secretariat of the Pacific Regional Environment Programme (SPREP) continues to strengthen its support to the region, with the formal opening of its Northern Pacific Sub-regional office in Majuro, Republic of the Marshall Islands (RMI) today.

The establishment of the Northern Pacific office will help support the strategic goals of SPREP’s Micronesian Members comprising the Commonwealth of the Northern Mariana Islands, Federated States of Micronesia, Guam, Kiribati, Marshall Islands, Nauru and Palau. The operations of the office will enable Members to benefit from strengthened resilience to climate change, healthy and resilient island and ocean ecosystems, improved waste management and pollution control, and the commitment to and best practice of environmental governance.

The office will also enable greater coordination and visibility of SPREP in supporting the environmental needs and aspirations of its Northern Members.

The RMI Minister in Assistance to the President and Minister for the Environment, Hon. David Paul, delivered remarks on behalf of the Government of RMI at the official opening of the Northern Pacific office.

“Today marks a new chapter for SPREP and RMI and our fellow Micronesian Members. The opening of a Northern Pacific office symbolises a step up in our partnership to ensure that our environment and valuable natural resources are effectively managed,” Hon. Paul said.

“As with our Micronesian brothers and sisters, RMI has  benefited from its partnership with SPREP as we work to meet our national environmental priorities through capacity building activities and from direct technical assistance such as in the development of critical national policies including the 2016 State of Environment Report, the 2017-2022 National Environment Management Strategy, and in implementation of critical projects such as PacWaste Plus, Climate Risks Early Warning Systems and more recently the Access and Benefit Sharing Project.”

“I encourage our Northern Pacific and Micronesian family to both strengthen our support to our very own Pacific regional environmental organisation and to take best advantage of  the expertise and knowledge that can be accessed from the SPREP Northern Sub-regional Office, and through its links to wider SPREP expertise and partnerships. Hon. Paul concluded by saying that he looked forward to seeing all Micronesian countries more effectively addressing their environmental priorities as a consequence of the support of this office.

The Director General of SPREP, Mr Kosi Latu, also delivered his remarks to officially open the office and looked back at the long journey and the challenges that have been overcome to get to here.

Director General Latu observed that the journey to establish the Northern Pacific office started in 2012 at the 12th Micronesian President’s Summit, where the Presidents of FSM and RMI supported the Marshall Islands’ bid to host a sub-regional office for the Northern Pacific. The establishment of a sub-regional office was again raised at the 17th Micronesian Presidents’ Summit in 2017 by the Presidents of FSM, Palau and RMI.

Mr. Latu acknowledged the leadership of the Northern Presidents and Leaders that has ensured that despite the resource challenges to establish an office, the foresight, vision and spirit of cooperation and collaboration has today been achieved to benefit the SPREP Members of the Northern Pacific.

“I would like to acknowledge with sincere gratitude H.E. Dr. Hilda C. Heine, President of the Marshall Islands for her continued support and that of her government, which has enabled SPREP to have a strengthened presence to serve the Northern Pacific,” Mr Latu said.

“I would also like to acknowledge those who were part of this journey who are no longer with us, who were not only champions of the Marshall Islands but also for climate change, the environment, and indeed SPREP.”

“Above all," DG Latu concluded, "the office is a commitment to build the capacity of our Northern Members to plan and manage the way forward together to address national environmental priorities."

The Northern Pacific sub-regional office is the third SPREP office to be established in the Pacific, with one in Fiji a seconnd in Vanuatu, and the main headquarters based in Samoa.

SPREP is especially appreciative of RMI’s Ministry of Natural Resources and Commerce for providing and renovating the office space for the SPREP sub-regional office, and for the commitment of time and resources in preparing the office for the opening.

The Vemööre Declaration for the…
Dec 1,2020 - by leannem
Read more