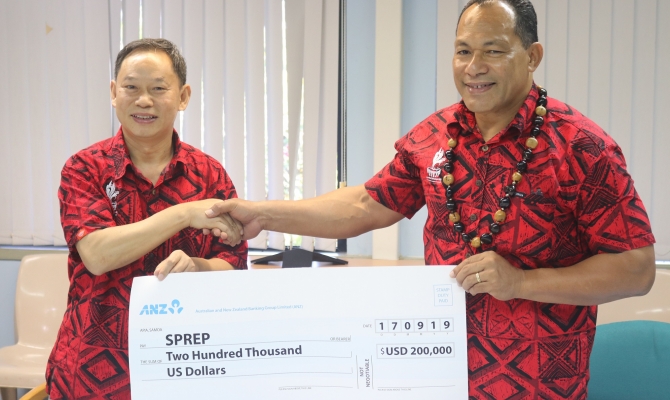 17 September 2019, Apia, Samoa – The Government of the People’s Republic of China and the Secretariat of the Pacific Regional Environment Programme (SPREP) continue its strong partnership into another year, with the official handover of the 2019 financial assistance from the Chinese Government to the Secretariat, valued at USD 200,000.

The handover was held this morning at the SPREP Campus in Vailima, Samoa, and was officially presented by His Excellency Chao Xiaoliang, Ambassador of the People’s Republic of China to Samoa, to SPREP Director General, Mr Kosi Latu.

The primary purpose of the financial assistance presented to SPREP is to support the Secretariat in its efforts to address key priority concerns of Pacific island countries in relation to Climate Change.

The handover was an example of the Chinese government honouring its firm commitment to help Pacific island countries tackle climate change, as reaffirmed by Chinese President Xi Jinping at the Asia-Pacific Economic Cooperation meeting in Port Moresby in 2018.

H.E Ambassador Chao Xiaoliang said, “Climate change is a challenge to all humanity that requires the cooperation of the international community. Developing countries, particularly Pacific island countries and other small island countries, bear the brunt of it.

“As the largest developing country in the world, China attaches great importance to the special concerns and legitimate demands of small island countries in combating climate change, and have over the years provided assistance through South-South cooperation to help Pacific island countries improve their capacities to do so.

He also stated that under the framework of South-South cooperation, China will continue to provide assistance in green energy and environmental protection, donate materials for combating climate change, support Pacific island countries in making relevant policy decisions in order to help them increase their capacities to combat climate change.

He concluded by saying “The future of mankind has never been so closely linked, and the interests of countries have never been so deeply intertwined. Climate change is an issue that concerns the future of mankind. As a sincere friend and partner of Pacific island countries, China will always stand together with Pacific island countries to strengthen solidarity and cooperation based on the principles of sincerity, amity and good faith.”

SPREP Director General Kosi Latu who received the financial assistance from the Government of the People’s Republic of China, thanked Ambassador Chao Xiaoliang and the Chinese Government and people for their continued support for the Secretariat, which has been provided  annually since 1998.

“Up until 2017, the annual contribution to SPREP from the People’s Republic of China was USD 150,000. It was increased to USD 200,000 as a result of President Xi’s commitment to Pacific island countries over the issue of climate change, and his willingness to support countries in improving their capability to address climate change. Part of this commitment included financial assistance of USD 1 million to SPREP over five years.

“The generous contribution of the People’s Republic of China to SPREP has made a positive impact on the work of the Secretariat in Climate Change, as well as all of our strategic priorities through the strengthening of our core, which enables SPREP to be more responsive to the needs of our Pacific island countries and territories.

Mr Latu revealed that the funding assistance to SPREP from China has supported in countless initiatives and activities within the Climate Change Resilience Programme, such as activities on oceanography, support for climate conferences such as the Pacific Resilience Meeting and the Pre-Climate Action Pacific Partnership, both held in Fiji this year; Knowledge Management support to strengthen the institutional knowledge of the work of the Secretariat for its Members, and the attendance at the 24th Conference of the Parties to the United National Framework Convention on Climate Change held in Katowice, Poland.

In addition, the funding support has assisted SPREP in successfully achieving an upgrade to its Green Climate Fund accreditation. This upgrade from Category C to Category B, will mean SPREP can oversee projects of up to USD 250 million.

Finally, Communications and Outreach support was also made possible through the funding support, which ensured that the work done by the Secretariat connects with its Pacific island Members, is tangible, and will follow through in Pacific island communities.

Mr Latu concluded by acknowledging with sincere appreciation the impact which the contribution by the People’s Republic of China has made and will continue to make regarding China’s commitment to help Pacific island countries address climate change and achieve sustainable development.