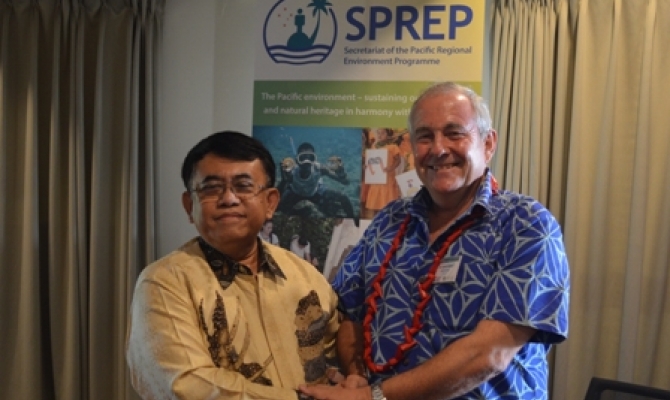 22 September, 2015, Apia, Samoa, 26SM - The Coral Triangle Initiative on Coral Reefs, Fisheries and Food Security signed a Memorandum of Understanding with the Secretariat of the Pacific Regional Environment Programme in Apia today.

The agreement will be the start of collaboration on a regional community based turtle conservation project helping to expand a SPREP project currently underway in Fiji, Kiribati and Solomon Islands, which is funded by the Government of New Zealand. 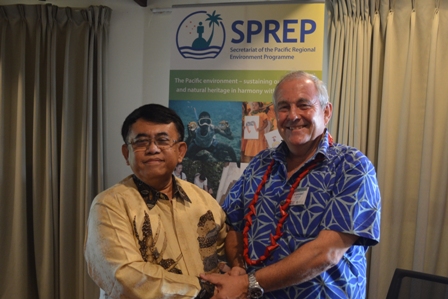 L-R Mr Widi A. Pratikto of CTI-CFF with Mr. David Sheppard of SPREP

"It gives us great pleasure to welcome the CTI-CFF to the SPREP meeting to sign this agreement. We look forward to future cooperation, we both have shared interests in a number of areas in the relation to the protection of marine and coastal environment," said Mr. David Sheppard, Director-General of SPREP.

The CTI-CFF is a multilateral partnership amongst the six countries of; Indonesia, Malaysia, Papua New Guinea, Philippines, Timor-Leste and the Solomon Islands, with the main objective of addressing the urgent threats facing the coastal and marine resources of the Coral Triangle, the area with the world's richest marine biodiversity.

"We can learn much from SPREP and its member countries. Having signed this MoU, we look forward to continuing communication with SPREP and especially learning how you deal with climate change adaptation and protecting coastal and marine resources," said Mr. Widi A. Pratikto, Executive-Director of CTI-CFF.

The signing of the MoU took place on day one of the Twenty-Sixth SPREP Meeting of Officials held at the Tanoa Tuisala Hotel from 22 – 24 September.