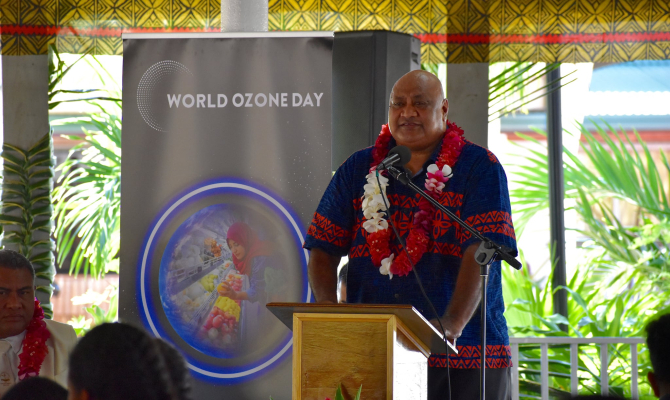 04 April 2022 - A new dawn at the Secretariat of the Pacific Regional Environment Programme (SPREP) starts this week with the organisation welcoming its new Director General.

Mr Sefanaia Nawadra takes over from his predecessor, Mr Kosi Latu, who held the role since 2016. Mr Nawadra’s appointment was announced at the 30th SPREP Meeting of Officials last September but was unable to take up the role due to prior commitments as the Head of the United Nations Environment Programme (UNEP) Pacific Office. This week, Mr Nawadra will have to wait a couple more days until he can settle into his new office at SPREP’s Vailima headquarters, because of Samoa’s COVID-19 Alert Level 3 lockdown restrictions.

Still, the new Director General is excited about his new calling.

“I feel extremely honoured and humbled to be in this position. I’m under no illusion about the task ahead and the challenges it entails but I view this position as a calling and I am excited to lead the SPREP Secretariat in our work for member countries and with all our partners,” Mr Nawadra said. “I want to acknowledge those who have been in this role before me, including Leota Kosi Latu for their leadership to get SPREP to where it is. I also want to thank the Chair of the 30th SPREP Meeting and SPREP members for placing their trust in me.”

A Fijian national, Mr Nawadra is no stranger to the work of SPREP. With close to 30 years’ experience in the regional and global environment sector, he has worked for the Secretariat in a number of different roles, with his last role being the Director of the Environmental Monitoring and Governance programme.

However, he knows SPREP has grown exponentially with currently more than 130 staff . As Head of UNEP in the Pacific he was involved in the recognition of the triple planetary crisis of climate change, biodiversity, and pollution through the declaration last year of the UN Decade for Ecosystem Restoration. All have existential detrimental impacts on the Pacific and he looks forward to leading SPREP to work with Pacific countries and partners to address these triple crises.

Said Mr Nawadra: “I believe in SPREP’s vision that being a resilient Pacific environment, sustaining our livelihoods and natural heritage in harmony with our cultures. I also know that these are very challenging times, especially with COVID-19 being very unpredictable, which calls for flexibility. That said, I am looking forward to working with our 26 Pacific island member countries, territories, metropolitan members and all our partners to protect and manage the environment and natural resources of the Pacific, to ensure sustainable development for present and future generations.”

Mr Nawadra holds a Bachelor’s Degree in Environmental Engineering from the University of Canberra and a Masters of Environmental Management from the Imperial College, University of London. He takes over SPREP’s top job from his previous role as the Head of the UNEP Sub-regional office for the Pacific. He has worked as SPREP’s Marine Pollution Adviser and the Director for the Environment Monitoring and Governance Division. He also worked as Conservation International’s Fiji Country Director; Environment Director (Pacific) of Sinclair Knight Merz Engineering Consultants; Health Safety and Environment Manager for Shell Pacific Islands Limited; and several senior technical positions within the Fiji Government’s Environment and Agriculture Departments.

He is from the village of Naivuruvuru, district of Verata in the province of Tailevu, with maternal links to the village of Vuna on the island of Taveuni. He is married to Talica and they have four children – two boys and two girls.

The Secretariat of the Pacific Regional Environment Programme (SPREP), established in the late 1970s, exists to promote environmental cooperation in the Pacific region and around the world. SPREP works towards its vision: “A resilient Pacific environment, sustaining our livelihoods and natural heritage in harmony with our cultures.”

SPREP work is guided by the SPREP Strategic Plan (2017–2026) which has been developed by SPREP Member countries and territories. The Secretariat works with Members and partners to deliver on environmental management and sustainable development in the region against four core priority areas: Climate Change Resilience, Ecosystem and Biodiversity Protection, Environmental Governance and Waste Management and Pollution Control.

Based in Apia, Samoa, with regional offices in Fiji, the Republic of the Marshalls Islands and Vanuatu, SPREP works with its 26 Pacific island Member countries, territories, metropolitan Members and all its partners to protect and manage the environment and natural resources of the Pacific to ensure sustainable development for present and future generations.