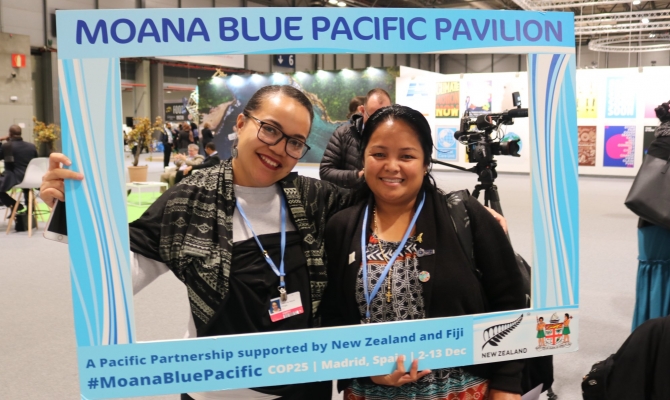 Q: How did you come to be involved in the climate change space?
A: I am the Climate Change Officer for the Department of Environment in Niue, I became involved in the process in 2015 when I was part of the national team that developed Niue's Nationally Determined Contribution – at the time it was the Intended Nationally Determined Contribution and because we were very limited in terms of resources at the national level so we had to elevate our seeking support to the regional and the global level and that’s how I became involved in the COP process, understanding what is required from us as a Party to the Convention and how we can properly communicate that across so we are meeting all the requirements.

Q: What is an issue or issues of importance to you country and to the Pacific that you’ve been following here at COP25?
A:  This is now my third COP, the first was in 2017 when Fiji took on role of COP23 Presidency.  We have a range of national priorities but due to our small number of delegates that make up the delegation, we’ve been allocated certain priority areas so under my negotiations stream, I follow mitigation specifically the focus on nationally determined contributions so looking at NDC information, NDC reporting and communication as well as looking at NDC common timeframes and at this session I have been following the Public Registry, the Adaptation and NDC Registry - how the two Registries work under the one portal and how often we communicate NDCs.  When my schedule allows I also usually step into the Article 6 discussion just to see what’ been happening.