The Fifth Pacific Met Council Comes to a Close 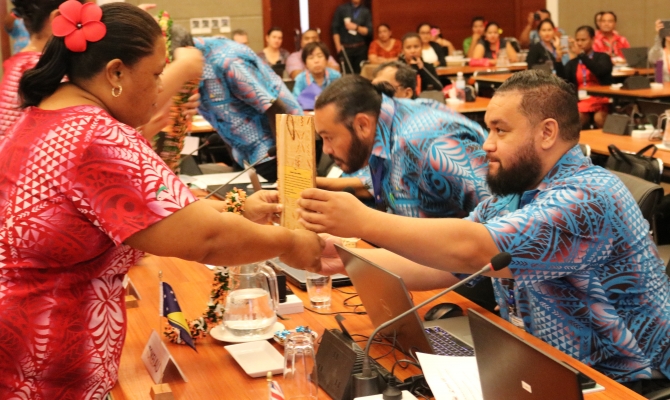 August 9, Apia, Samoa – The Fifth Pacific Meteorological Council Meeting (PMC-5) has wrapped up today in Apia, Samoa where Pacific Met Directors, National Meteorological and Hydrological Services (NMHSs), partners, donors and key actors in the region were convened to discuss the important contributions of NMHSs to sustainable development, climate change adaptation and disaster risk reduction, and challenges faced with in the Pacific region.

As the host country for PMC-5, Samoa was at the helm of Chairmanship with Chief Executive Officer of the Ministry of Natural Resources and Environment (MNRE), Mr Ulu Bismarck Crawley, presiding as PMC Chairman, and Ms Isabelle Leleu, Director of French Polynesia Meteorological Services, as Vice-Chair.

After three days of deliberations at the TATTE (Tui Atua Tupua Tamasese Efi) Convention Centre, a ‘Report of Fifth Pacific Meteorological Council Meeting’ and an Outcomes Statement were developed and adopted by PMC members. These key documents will from today guide the work of Pacific NMHSs and all stakeholders, until the next PMC meeting.

A number of key recommendations were made by the PMC, as well as notes made of important progressions to date of the development of key regional and national structures which inform decision makers and allocate resources and investment moving forward. Full recommendations, agreements, and more are detailed in the ‘Report of Fifth Pacific Meteorological Council Meeting’ which will be made available for all council members and the public once the meeting officially closes.

Another important outcome of the PMC-5 was the decision regarding the next PMC meeting (PMC-6), which will now be held in 2020. A Pacific island country has come forward with a request to host, but will need to confirm with their national government before it is made official. The PMC-6 is also set to be followed directly by the third Pacific Ministerial Meeting on Meteorology (PMMM-3).

The PMMM is the gathering of Ministers responsible for meteorology in the Pacific region. Normally it is held directly following the PMC.

The PMMM provides the opportunity for Ministers to be involved in discussions on the role of Pacific NMHSs, challenges they face, and their contributions to both national and regional sustainable development. It also provides an opportunity for Ministers to discuss priorities of the NMHSs and their contribution to the implementation of global, regional and national frameworks, strategies and policies.

While NMHSs have benefited from considerable investment in the Pacific region over the years by national governments, development partners, collaborating organisations and institutions – the demand for continuous monitoring, training and development in order to ensure reliable service, requires ongoing investment and support. Coupled with the increasing requirements for NMHSs to support disaster risk reduction and climate change services, this further emphasises the importance of the role of NMHSs in helping our Pacific communities adapt and respond to climate change impacts.

In officially closing the deliberations, Chariman Mr Ulu Bismark Crawley expressed his sincere gratitude and appreciation the contributions of all the council members .

“I would like to take this opportunity to thank you all for making this meeting a success. In particular the Outgoing Chairman of the PMC – Mr David Hiba Hiriasa, Director of the Solomon Islands Meteorological Services; Mr. Ofa Fa’anunu, President of the WMO Regional Association Five and Director of the Tonga Meteorological Service; WMO – Representative of the Secretary General Ms Mary Power; Directors, Heads and Senior Officials from the National Meteorological and Hydrological Services and other government officials; Development Partners; United Nations and CROP agencies; the Verysian Group; Australia Pacific Climate Partnership;  CSIRO; Climate Analytics; Bureau of Meteorology; NIWA; IFRC; NOAA; UNDP; UNEP; APCCC- POSTECH; RESTEC; JICA; University of Hawaii; USP; SPC; CIMH- Caribbean Institute for Meteorology and Hydrology; and Members of the Media; and the Pacific Meteorological Desk and the SPREP combined team of Climate Change Resilience, ICT, and Communications for supporting the host – Government of Samoa,” said Mr Crawley.

“On behalf of the Government of Samoa we thank you for the opportunity to host this meeting, ask for your forgiveness of any shortcomings, we can only pledge that we gave it our best.”