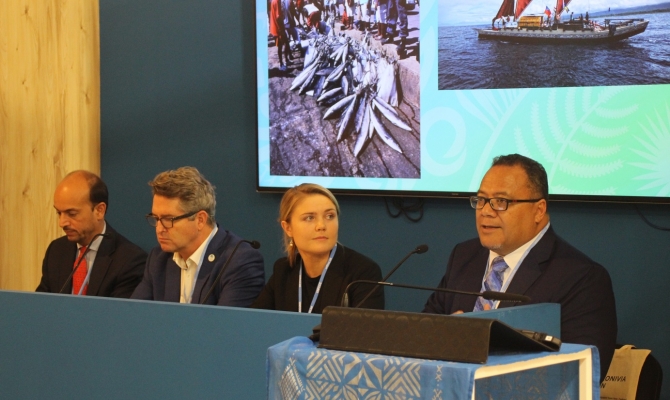 Katowice, Poland – Urgent action on ocean and climate change is needed to save small island states, coastal communities and marine life all over the world. This was the message emphasised at the ‘Friends of the Ocean – Update and Moving Forward’ side event held today in the Pacific and Koronivia Pavilion at the UN’s Framework for the Convention on Climate Change Conference (COP24) in Katowice, Poland.

Pacific island countries, small island states and countries with vulnerable coastal communities, have stood firmly beside the Fijian Government as it pushed for urgent and critical action on ocean linkages to climate change, through its Presidency at last year’s Climate Change Conference.

“Warming oceans and sea level rise are causing some of the biggest and strongest storms that we’ve seen in the last 10 years to ever hit our shores. And this is the new normal. But, while we’re seeing the impacts of climate change above water on land, our challenge is to find out what this is also doing under the water in our oceans,” said Mr Taholo Kami, The Ocean Pathway Special Representative of the COP 23 Presidency Secretariat.

A key success of COP23 was the Ocean Pathway Partnership, co-chaired by the Governments of Fiji and Sweden that started with the co-hosting of the UN Ocean Conference in New York in June, 2017. The UN Ocean Conference and the Ocean Pathway Partnership are driven by the priority of UN’s Sustainable Development Goal 14, which aims to “conserve and sustainably use the oceans, seas and marine resources.”

“We formed ‘Friends of the Ocean’ because we felt that some countries were ocean friendly, but perhaps weren’t clear of what the objectives of the Ocean Pathway was,” said, Mr Taholo Kami.

“We thought by creating a safe space for parties and stakeholders to be able to discuss the different perspectives and approaches to dealing with ocean issues within UNFCCC (United Nations Framework Convention on Climate Change), that we could continue this momentum at COP24, and particularly in the lead up to COP25 which we want to be the Ocean COP.”

The 30 countries of the ‘Friends of the Ocean’ process  have something in common – their passion to do work for the ocean, and they have come together calling for the Paris Agreement Work Programme to be scrutinised so as to allow the  introduction of Great Ocean initiatives within UNFCCC in the future.

This side event is the second time the ‘Friends of the Ocean’ have met since their first meeting and formation in Bangkok from 1 to 4 September.

During the side event discussions, Mr Kami said it was their hope that the Paris Agreement rule book would work in their favour.

The Ocean Pathway was successfully launched during COP 23 in Bonn, Germany with a two track strategy for 2020 supporting the goals of the Paris Agreement. This includes increasing the role of the ocean considerations in the UNFCCC process and significantly increasing action in priority areas impacting, or impacted by, ocean and climate change.

The Ocean Pathway discussion is on from 5:30pm tomorrow, 6 December at the Pacific and Koronivia Pavilion, where parties and stakeholders are encouraged to attend.

“Join us tomorrow as we discuss more about the ways forward, especially for the political process required for COP25, and potential responses to the UNFCCC report and what we can do in terms of actions to take ahead of next year,” concluded Mr Kami.