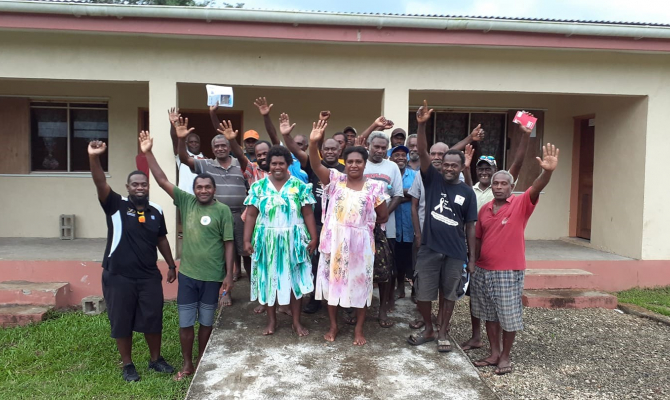 More than 20, 000 community members in Torba and SANMA Provinces in Vanuatu will directly benefit from the establishment of community climate centers under the Vanuatu Klaemet Blong Redy, Adapt mo Protekt (Van-KIRAP) project.

Community leaders in Torba and SANMA Provinces in Vanuatu have given the final clearance for Vanuatu Meteorology and Geo-hazards Department (VMGD) and Van-KIRAP to establish the climate information hubs inside their communities, realising the benefits to their security, livelihood, and wellbeing.

The CCCs will act as hubs strategically located in area councils for receiving Climate Information Services (CIS) from the VMGD and further dissemination of CIS to ‘last mile’ communities.  They will also build adaptive capacity of communities and households in the uptake of, use and translation of CIS into actions to build resilience.

The Van-KIRAP project sought guidance and approval from community leaders, provincial government officials, non-governmental organisations and local stakeholders. These consultations were to solicit community input in the design, commissioning, and operationalisation of the community centers.

“In Vanuatu, not all communities are the same, the governance, institutional capacity and resources vary, hence the delivery and roll out of these climate centers are tailored to suit community needs and priorities” said Moirah Matou, Van-KIRAP Project Manager.

“More importantly, we want the process to be as inclusive as much as possible; and that respective communities make decisions regarding their community centers,” Matou added.

The communities in which the team visited in SANMA Province included Nakere in South Santo, Vanuatu Agriculture Research and Technical Centre  in Luganville, Santo island, and the Provincial Disaster Management Office (NDMO) office in Luganville, Santo island. In the TORBA province, the community consultations were held in  Loh in Torres, and the NDMO office in Sola, Banks.

“In all the consultations conducted, it was obvious that most people in the communities are aware of the short term (weather) forecasts and warnings issued from VMGD, including what actions to take during such events. However, medium- and long-term forecasts contained in the CIS are not well understood,” said Mr David Gibson, Van-KIRAP Community Coordinator.

“This confirms that an ongoing training and awareness program for communities and provincial government officials should be established and conducted during and beyond the life of the project (Van KIRAP).  This will enable communities to use CIS and have the skills and capacity to action information contained in the CIS, so they become resilient to climate variability and change,” Gibson added.

“The establishment of the Community Climate Centre will allow NGO’s and our communities to receive trusted, reliable, firsthand information from VMGD,” said Mr. Gorden Edward, the World Vision Vanuatu representative.

“Our communities in Loh and the surrounding islands are excited to have the community climate centre in our area council as it will provide climate and warning services equivalent to the services provided to people residing in Port Vila (National Level),” said Mr. Thomas Putunleta, the Area Administrator for Loh Area Council.

Mr. Reynolds Surmat, Secretary General (SG) for TORBA Province further stressed that “before the project (Van KIRAP) comes to an end, information (CIS) must be spread to all users and communities, allowing communities to use this information (CIS) to better their livelihood”.

Torba Province is the northernmost province of Vanuatu, made up of the Banks Islands and the Torres Islands – over 15 islands altogether with an estimated population of 9,500 people.  It sits above the Sanma Province which is made up of the islands Espiritu Santo, Malo and includes a number of smaller surrounding islands that sit offshore such as Aore, Tutuba, Turtle, Bokissa and Rtua Islands.