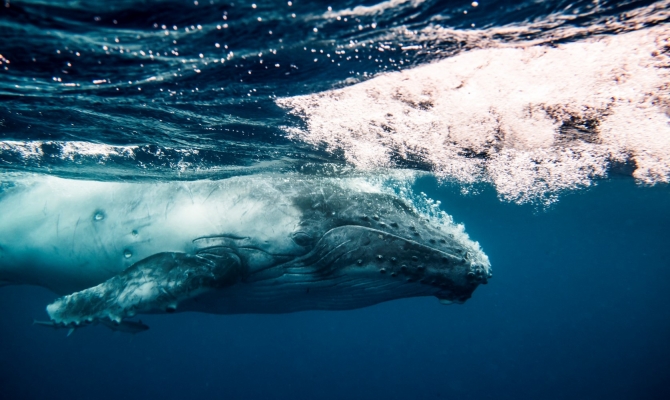 Island and Ocean Ecosystems
5 April, 2017, Nuku'alofa, Tonga - What do whale excrement and climate change have in common? More than you may think, according to a special report on Climate Change and Whales that was presented before the Whales in a Changing Ocean Conference in Tonga.

Climate change impacts are far reaching, touching the lives of Pacific islanders well as Pacific whales. Warmer waters are expected to bring about a change in the distribution of many whale species, their food chain may be disrupted and there may be increased competition between species which occupy separate spaces. Further to that changes in human behaviour because of climate change may see an increase in encroachment of human activities upon whale habitats. 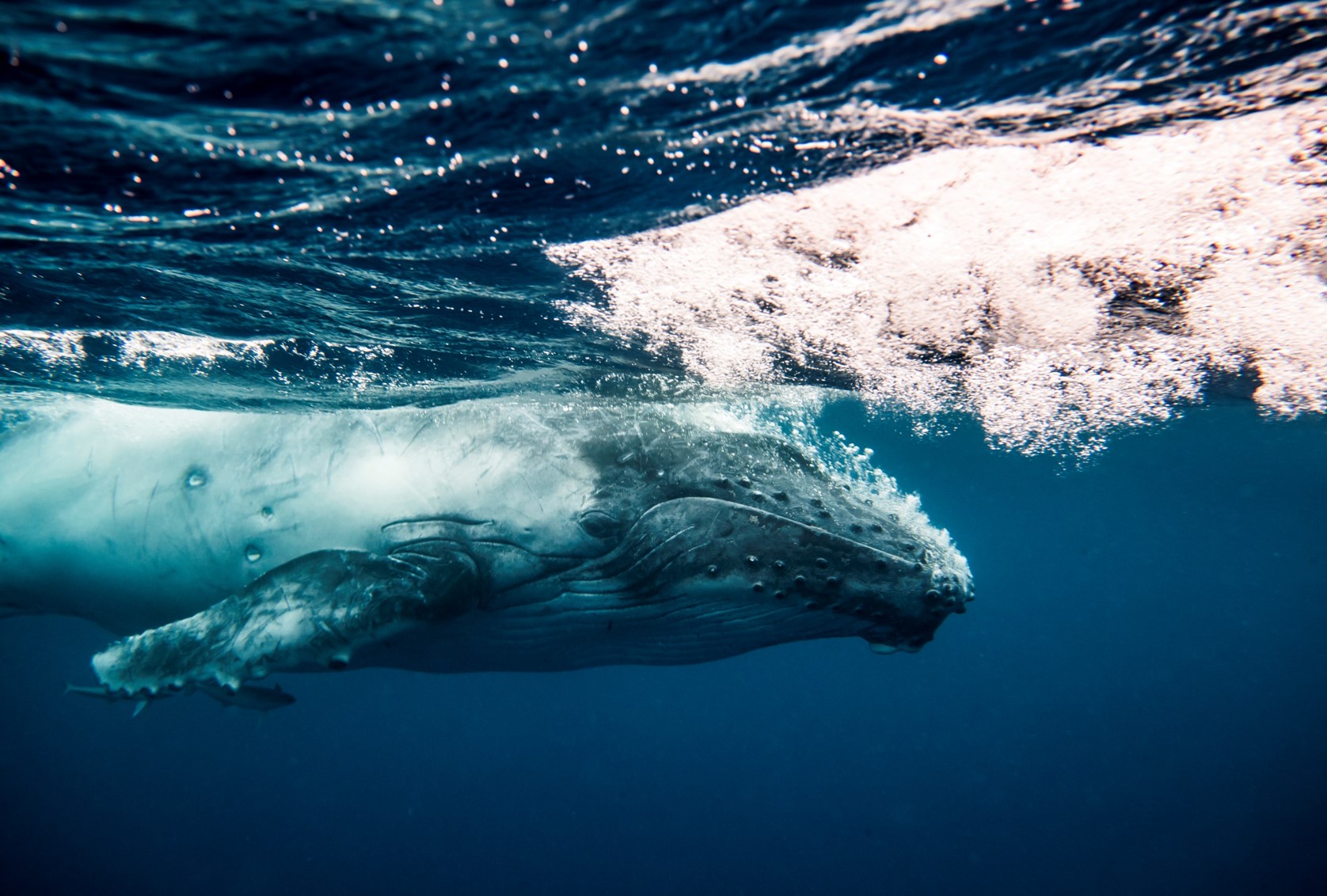 "Of all the carbon dioxide emitted by human activities, the ocean has absorbed approximately one-third and continues to do so," presented Ms Angela Martin of Blue Climate Solutions who developed the report in partnership with Ms Natalie Barefoot of CET Law, for the Secretariat of the Pacific Regional Environment Programme (SPREP).

"Although there is much still to understand, by exploring and identifying the potential direct and indirect impacts of climate change on whales, and the related consequences on whale-watching economies, we can work towards identifying solutions for humans and whales alike."

So where does the whale excrement, or whale poo, fit into this?

Whale poo, described as flocculant fecal plumes, is rich with nutrients, so much so, it has been described as miracle grow for the ocean. It enables growth of phytoplankton, which takes carbon dioxide, a greenhouse gas, out of the atmosphere and, can carry the carbon to the ocean floor.

In the Southern Ocean, a study has reported that sperm whales enable as much carbon to be captured as is sequestered in 694 acres of forests in the United States, each year.

A newer figure presented to the Whales in a Changing Ocean conference outlined that just by swimming, 80 sperm whales in Hawaii enable 60 tonnes of carbon to be captured each year. This is equivalent to carbon sequestered by 208 acres of forests in the US in a single year.

"I think this is really welcoming news – we are small islands with big oceans, now trying to meet our Nationally Determined Contributions under the Paris Agreement," said Mr Fakavae Taomia, Permanent Secretary for the Office of the Prime Minister of Tuvalu.

"We would like to know how much of our ocean carbon accounting can help us in this, while also strengthening our conservation practices in sustainably managing our whales. We would like to further explore this and this report is a good first step from SPREP."

Whales also contribute to the ocean's carbon storage capacity by storing large amounts of organic carbon, passed along through food chains, in their bodies. 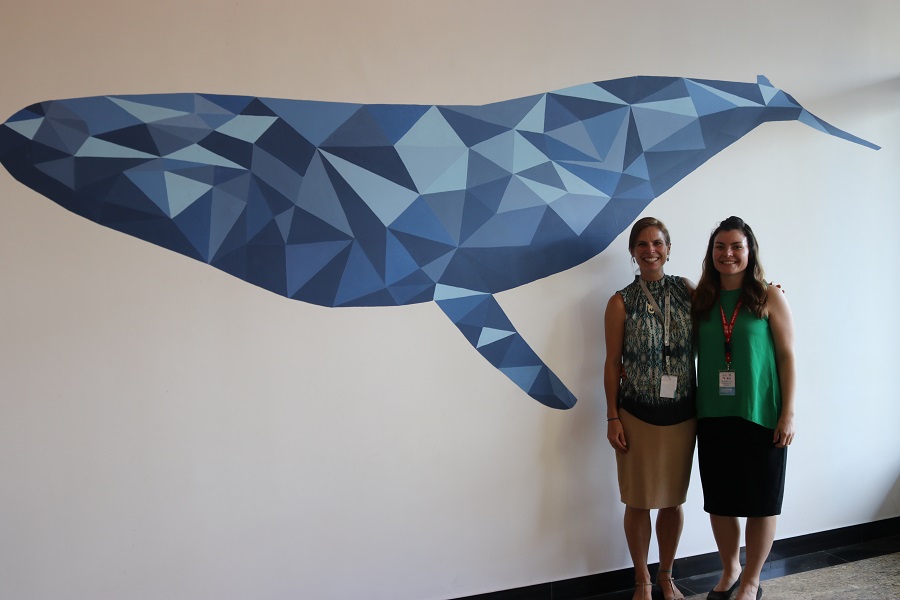 "As well as storing carbon in the ocean during their long lifespans, when whale carcasses sink, the carbon stored in their biomass can enter sediments," presented Ms Martin.

"According to one study in 2010, eight species of baleen whale globally can store as much carbon as 100,000 acres of U.S. forests in one year. This is one way that carbon is effectively retired from the carbon cycle, and is unlikely to re-emerge as a greenhouse gas for hundreds to thousands of years."

A draft copy of the Pacific Island Whales in a Changing Climate Report is now available for comment on the SPREP website: http://www.sprep.org/attachments/Publications/Presentation/whale-conference/DRAFT_pacific-whales-climate-change.pdf.  The final report, developed by Blue Climate Solutions and CET Law for SPREP, was funded by Fonds Pacifique. It will be launched during the UN Ocean Conference at the UN Headquarters in June this year.

So now we know the value of whales in helping to address climate change, the world may just want to band together even more to protect both our ocean and our whales.

"Since restoration of whale populations could help mitigate global warming, it is worth considering that activities that negatively impact whale populations also limit their mitigation potential," presented Ms Martin.

"Climate adaptation discussions, plans and frameworks could tap into the potential of whales and their blue carbon services, while research and projects that aim to preserve and restore healthy whale populations for their carbon sequestration services, would have co-benefits for the whale-watching economy."

A special session on Whales and Climate Change was held during the Whales in a Changing Ocean Conference now underway in Nuku'alofa, Tonga.