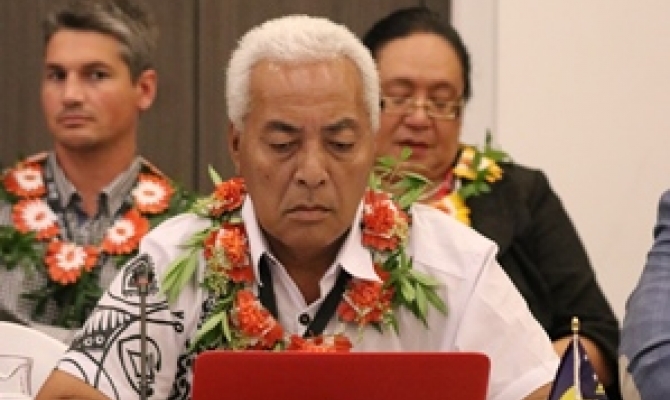 6 April, 2017, Nuku'alofa, Tonga - "There is a potential market for Whale watching in Tokelau with good regional models to support the initiative," said Mr Mikaele Perez Director for the Department of Economic Development, Natural Resources and Environment.

Representing Tokelau, Mr Perez says being part of the Whales in a Changing Ocean conference has opened up opportunities and given him a deeper insight into the conservation of Whales as part of the Pacific region.

"Attending the Whales in a Changing Ocean has given us a better understanding of Whales, looking into their behaviour and their migration routes. It has also shown us how we should do our part in Tokelau to conserve these mammals," says Mr Perez.

Whale watching in the Pacific Islands is now a key attraction to international visitors earning the region over $21 million USD per year.

Mr Perez says neighbouring Pacific island models such as those in Tonga, Cook Islands and Niue have encouraged the potential opportunity for Whale-watching in Tokelau. 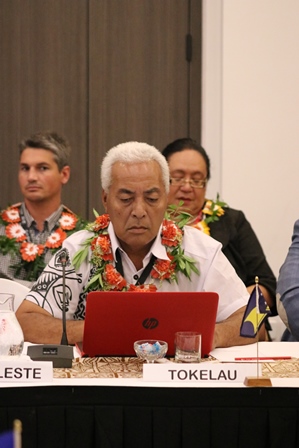 "In neighbouring Tonga, tourists go to considerable expense and travel time to get to the northern islands of Vava'u specifically to see whales. There is a potential market for this in Tokelau with good regional models to support the initiative," says Mr Perez.

In April 2010, the late Faipule Foua Toloa, Ulu o Tokelau at the time announced Tokelau's intention to declare a national whale sanctuary in Tokelau's EEZ of 290,000km2. Later in 2011 Faipule Toloa made the Tokelau Whale Sanctuary a commitment by Tokelau to the Pacific Island Forum Leaders' Pacific Oceanscape, an initiative also endorsed by Tokelau.

Mr Perez says that with the Whale sanctuary in Tokelau on the table "we are now working towards making this opportunity official with the Government and also with New Zealand as Tokelau is a territory of NZ."
New Zealand's High commissioner to Tonga Her Excellency Sarah Walsh says "whale watching, in particular, presents a unique opportunity for tourism and revenue generation for the Pacific region, but it must be managed in a way that does not compromise their long-term sustainability."

"Our futures are collectively connected to those of these whales, and this ocean, and our abilities to conserve and protect them," she says.

Tokelau is taking further steps towards the conservation and protection of its natural resources. Mr Perez says "the Oceans in a Changing Ocean conference has helped us in networking and gathering information, we are now talking to the SPTO office about Tokelau becoming a full member of the organisation which is the first step into getting into eco-tourism."

A national marine sanctuary in Tokelau can lead to development of the tourism industry and can help increase knowledge and understanding of marine species and ecosystems on the island.

At the 2010 meeting of the South Pacific Whale Research Consortium (SPWRC) support was pledged to Tokelau to assist in identifying and managing marine mammals in their waters. SPREP and partnering NGO's are also providing support and technical advice to Tokelau in implementing the research and educational values of their sanctuary.

NOTES:
The Whales in a Changing Ocean Conference from 4 – 6 April, 2017 in Nuku'alofa, Tonga, is hosted by the Government of Tonga, the Secretariat of the Pacific Regional Environment Programme (SPREP) and the Auckland Institute of Studies (AIS).