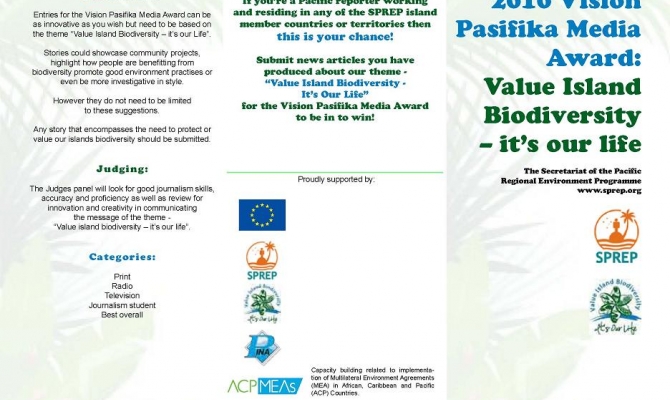 Pacific Journalists have been commended by the Secretariat of the Pacific Regional Environment Programme (SPREP) with the announcement of the winners of the 2010 Vision Pasifika Media Awards. These awards are a tribute towards recognising the role of Pacific reporters in raising awareness of environment issues. 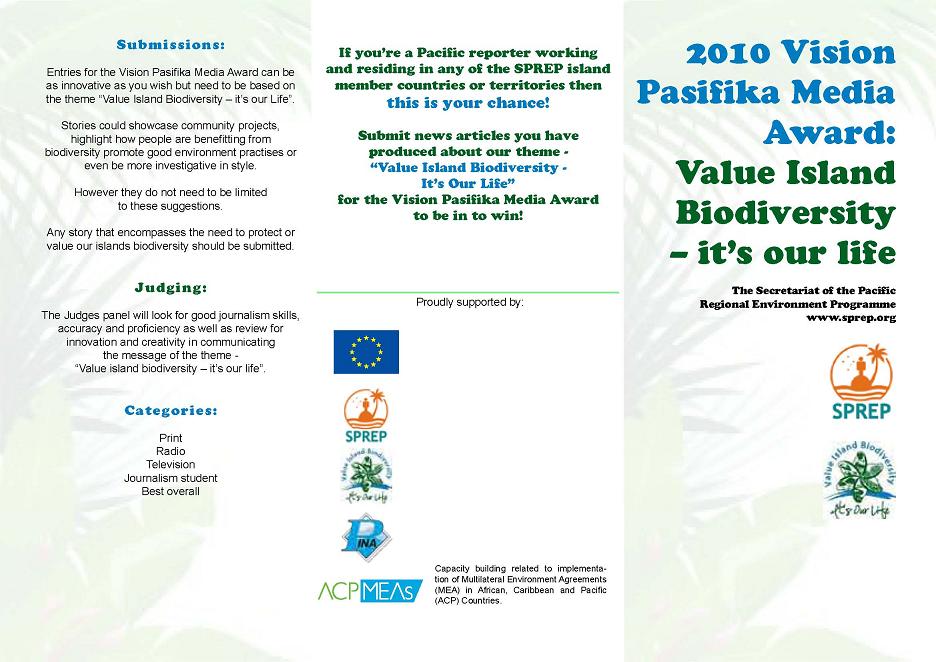 officer for the Secretariat of the Pacific Regional Environment Programme.

"We received a lot of excellent entries and we are encouraged by the environment reports coming from the region. This award was launched to ensure Pacific reporters were honored for the important role they play in helping to raise awareness as to the importance of our environment."

"We understand the powerful role of Radio in our Pacific region and we encourage radio producers to submit entries for the next Vision Pasifika Media Award."

The Wansolwara University of the South Pacific Journalism Student Publication was awarded a special commendation for their role in helping to develop environmental journalism in the region. It is also the second consecutive time that USP Journalism has won the SPREP Vision Pasifika Media Awards.

Head of USP Journalism, Shailendra Singh said the award recognises USP Journalism and Wansolwara for commitment to and excellence in environmental reporting. The award was result of teamwork by a number of students, he said.

"Instilling an appreciation and understanding of the environment is part of the journalism curriculum at USP. We work closely with organisations like SPREP, WWF and SeaWeb to educate and empower students in environmental reporting. We want them to take their skills and knowledge to the newsroom and organisations they work for."

SPREP would like to acknowledge and thank all Pacific reporters that submitted their entries for the Vision Pasifika Media Award 2011 and to acknowledge the role of the judging panel.

"We know the judging panel would have had a difficult time given the high caliber of entries, and we are grateful for the time they took to judge this award. We had a member from the Biodiversity area of SPREP, Conservation International Pacific Islands Program and PACNEWS. Thank you very much for your time," said Nanette Woonton of SPREP.

Each category prize was USD 500 each. The launch of the Vision Pasifika Media Award for 2011 will be announced next month.

Ms. Rachna Nath - Award winner of the Television Category
Rachna is a Television Journalist, News Presenter and Current Affairs Producer with Fiji Television, having joined the station in 2006. She was recently awarded the Pacific islands News Association Award for the Young Pacific Television Journalist Award in 2009 and the PINA Media Summit in Vanuatu, winning an internship with Television New Zealand.

"I have naturally developed a passion for the environment and that is displayed through the environmental conservation stories I have done over the years covering areas of Climate Change Adaptation, Biodiversity, Wetlands, Forestry and Marine Conservation by portraying the stories of struggle, survival and adaptation in Pacific Island Countries. I'm very glad and honored to receive this award on behalf of Fiji TV, and I dedicate the award to my hardworking new and current affairs team."

Mr Rajan Sami - Award winner of the Print Category
"My passion for writing stems from a childhood love of reading and words. Growing up, my parents refused to buy a TV but I could pick a new book each week. I continued the love affair by working in magazines and have recently made the leap from lifestyle media to developmental communications, taking a writer and sub-editor role with the Secretariat of the Pacific Community in Fiji in January. Besides words, I love food, travel and nature-based activities."

Ms. Maggie Boyle - Award winner of the Journalism Student Category
Maggie completed her journalism major last year and is currently working towards finishing her major in Politics. Over the last couple of years she has juggled student life and full time work as for the last four and a half years she has held the position of a multimedia journalist working for national and regional broadcaster, Fiji TV. In this role she covered stories from headlining news to regional documentaries such as the World Press Freedom Day. Last year she moved into a regional communications role with the Australian Agency for International Development, AusAID, based in Suva.

"As a journalist, persistence to get a balanced, fair and accurate story has being an invaluable quality. It's a quality I recommend to any student aspiring to journalism. When it comes to climate change stories, persistence needs to pay off when you're racing against the clock for entire communities particularly in the Pacific."

"We have been advocating all these issues for a number of years and we will continue to do so," said Head of USP Journalism Shailendra Singh.