Accelerating actions to address Ocean Acidification in the Pacific 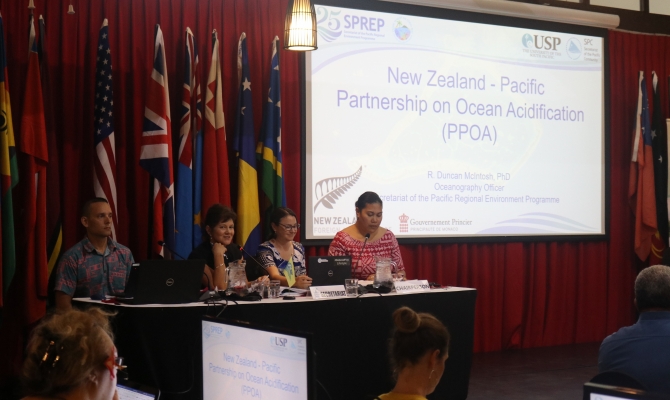 4 September 2019, Apia, Samoa – The Pacific Ocean is home to 25% of the world’s coral reefs. Coral reefs hold particular significance in terms of food security, cultural value and as tourist attractions in the Pacific region.

Ocean Acidification (OA), which is being labelled as the “evil twin” of climate change, has had a severe impact on these coral reefs, as well as on food security and community livelihoods. It was identified as a priority issue at the Fourth and Fifth meetings of the Pacific Meteorological Council.

The work that is being carried out in the Pacific to address this issue was highlighted at a side event during the second day of the Secretariat of the Pacific Regional Environment Programme (SPREP)’s 29th Meeting of Officials taking place in Apia, Samoa.

Amongst those highlighted were work of the New Zealand-Pacific Partnership on Ocean Acidification (NZPPOA) project in Fiji and Tokelau, Samoa’s joint initiative on OA monitoring with the Republic of Korea, and the recently published “Mainstreaming Ocean Acidification into National Policies” handbook on OA for the Pacific.

The NZPPOA project is a collaborative effort between the University of the South Pacific, the Pacific Community and SPREP, with funding support from the Ministry of Foreign Affairs of New Zealand and the Government of the Principality of Monaco. It aims to build resilience of Pacific island communities to OA and was developed in response to needs identified during the Third United Nations Small Islands States Conference in Apia in 2014.

Ms Bridget Kennedy of Conservation International, Fiji, presented on the implementation of the PPOA project on Taveuni island, specifically in Cakudrove Province. Temporal restrictions on fishing have been put in place, as well as mangrove or coastal vegetation enhancement to locally buffer pH and to curb coastal erosion while improving the habitat of fish.

Ms Jewel Toloa of Tokelau identified some of the challenges in raising awareness on OA in Tokelau’s three atolls of Atafu, Fakaofo and Atafu, the main one being trying to translate technical terminologies and scientific language into the local language for Tokelauans to understand.

The NZPPOA Project has enabled the translation of materials into Tokelauan, which have been distributed to schools and used as lesson materials for students to gain a better understanding of what OA is.

In Samoa, the joint initiative between the Government of Samoa and the Republic of Korea, a project titled “Ocean Acidification Monitoring in Samoa” has established the infrastructure and networks to monitor OA.

OA monitoring buoys have been set up and deployed successfully in Palau, and will soon be set up in Samoa, and staff of the Ministry of Natural Resources and Environment in Samoa will have the responsibility to operate and maintain these buoy systems.

Finally, a new handbook on OA for the Pacific region was recently published by the PPOA project, titled “Mainstreaming Ocean Acidification into National Policies.”

This publication was a collaborative effort between SPREP and the International Ocean Acidification Alliance, which is based in Washington D.C. The handbook draws upon the framework of the OA Alliance, and highlights some of the ways in which OA can be brought into national policies.

The handbook can be found on the SPREP website at this link:  https://www.sprep.org/sites/default/files/documents/publications/MainstreamingOAintoNationalPolicies_PacifcIslandsHandbook_0.pdf